Bringing an understanding of Buddhism

London, UK -- There won’t, almost by definition, be much of a noise made about it, but London is about to play host to its biggest-ever festival of Buddhist culture. Films, dances and discussions will open the doors on a religion – or is it a philosophy? – that may have attracted its share of followers in the capital, but whose quiet ways remain largely opaque to the general public. 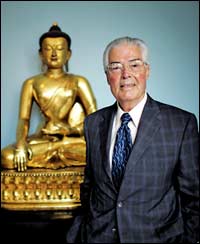 The Many Faces of Buddhism season will be given extra impetus by the opening next week of the Victoria and Albert Museum’s first-ever gallery of Buddhist sculpture. It is no coincidence. Both the festival and the gallery owe their existence to the Robert H.N. Ho Foundation, a Hong Kong philanthropic organisation founded in 2005 and committed both to the spread of Chinese arts and culture, and to the wider dissemination of Buddhist thought.

Ho is in London with his son, Robert Y.C. Ho, to observe the final touches being applied to the museum’s light-filled gallery, which stands next to the John Madejski Garden. The preponderance of philanthropists’ names is a telling indicator of the reliance of even internationally renowned museums such as the V&A on private investment to fulfil their plans.

Ho is soft-spoken and seemingly modest in his aims: he wants to give people a greater understanding of Buddhist ways and traditions, particularly inspiring young people to take up meditation. But there are wider ambitions at work too: helping people to “achieve peace, not just with themselves but also in society at large”. This is an artistic programme with an unashamedly broader social scope.

I ask Ho and his son, who has a more studious air, what kind of surprises the casual onlooker might expect. “I’m not sure people realise that Buddhists don’t believe in a directing God. It is a philosophy, a way of looking at the world,” says the younger Ho.

“And then there is its basic message, that there is a profound level of interconnectedness in the world. Buddhism has evolved through each culture that has adopted it, but its basic message has remained the same.” Ho’s father interrupts to clear up a potential misunderstanding. “We are not out there to be missionaries. We just want to show the art.”

The £1.5m gallery will trace the chronological and geographical development of Buddhism through the museum’s outstanding collection of works. They include a spectacular two-metre-high shrine from Burma’s royal palace at Mandalay, replete with sacred geese and a chest containing a volume of scripture. It is the first time for more than 30 years that it will be on permanent display.

The festival, which starts today, is similarly devotional in its conception. Ho Jnr’s personal highlight is the day of rare Buddhist dances that belong to four distinct traditions, taking in Japanese Noh theatre and a troupe of Drikung Kagyu nuns from the Samtenling monastery in Dehra Dun in India.

Ho and his son respectively represent the third and fourth generation of philanthropy in the family. The tradition was started by his grandparents, who practised a simpler version of giving. “My grandfather would donate a sum for a building or a school, write the cheque and then walk away,” says Ho Snr. “We try to create projects, and stay with them.” To that end, the foundation has a chief executive and a permanent staff of 13 in its Hong Kong headquarters.

Although much of their time is presently taken with bringing work to the west, the reverse applies too. The foundation was instrumental in taking a British Museum exhibition, Britain Meets the World 1714-1830, to Beijing in 2007. The aim of the show was a subtle one, tracing the similarities between two nascent empires. It was the first substantial British exhibition to travel to China since 1949, and not the easiest to arrange, says Ho Snr.

“A lot of countries – and China is one of them – do not understand the role of private foundations. They suspect them of ulterior motives. They are so used to the idea of state sponsorship, they don’t see why individuals would try to get involved. You could see they mistrusted us. It was not comfortable.”

So while the west had much to learn from philosophies such as Buddhism, there was a lot of learning to do in the east too?

“Absolutely,” he replies. “That is one of our purposes, to bring western culture to China. The Chinese people are definitely interested in it, but it is the government which is dragging its feet.” The west’s thirst for Chinese culture in turn was amply illustrated by another of the foundation’s initiatives, financing a retrospective by the contemporary artist Cai Guo Qiang at New York’s Guggenheim museum, which was among its most highly attended shows.

I say that both versions of cultural exportation required deft diplomatic skills. “You have to be very sensitive about it. We are not preaching a religion,” he insists. “We are explaining a philosophy. And we are certainly not implying that any culture is superior to any other.”

Setting aside the theme of cross-cultural exchange, Ho Jnr says that helping to conserve traditions in China itself was another key aim of the foundation. The most high-profile of these projects has been the revival of Kun opera, an art form that thrived under the Ming dynasty. Two productions, Peony Pavilion and The Jade Hairpin have toured China over the past two years, and have attracted large audiences. Three new troupes have been formed in the wake of the revival. I ask if these too are destined for the west, and there is an ominous pause.

“The productions last for about three days,” says the younger Ho. “But they have shortened them,” his father interjects quickly. “It is a very beautiful art form. If it came to the west, people would be very curious.”