Kuala Lumpur, Malaysia -- Strictly speaking, they should not exist. Reclining Buddha statues could be condemned as idolatry because the Buddha asked that no images be carved in his likeness. So, at first, after he slipped away, artistically inclined devotees only paid tribute to facets of his identity — footprints, the chair he sat on, among other relics. 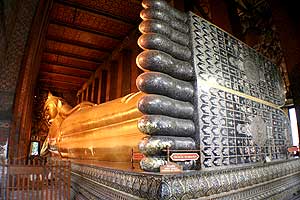 “Eventually, the devotional impulse won out,’’ says Gary Gach, the author of The Complete Idiot’s Guide to Buddhism. Good thing, too. Despite their languid pose, the statues cast a spell that few sights in Asia can rival.

Often to be seen glamorously draped across postcards, traditional reclining Buddhas have the left arm aligned along the body while the right serves as a pillow with the hand propping the head. Sometimes no longer than a grain of rice, the reclining Buddha is more often on the scale of a junk.

The icon appears mirage-like everywhere, from Penang and Bangkok to Yangon in Burma, along with Ayutthaya (old Thailand’s capital) and that Laos backpacker haunt, Vang Vieng. One even crops up in White Plains, New York. The reclining Buddha’s “home” may be a temple, grotto or fresco — anywhere with a touch of width and mystique.

The statue represents Shakyamuni Buddha — the historical Buddha — at his death at 80. It is said that when the Buddha knew the end was near, he asked his disciples to prepare a couch for him in a grove, then reclined on his right side, facing west, with his head propped on his hand.

On the last day of his life, instead of just turning ashen, he kept teaching. So, despite their decadent aura, the statues embody — as it turns out — the devotion to duty that the Buddha displayed at the last gasp.

The first is the smile that plays on the lips, which may seem odd especially to anyone familiar with the reality of death or Christian images of wretched saints and angels. The smile, it transpires, is simply meant to express “the supreme joy” that comes with enlightenment, Gach explains. 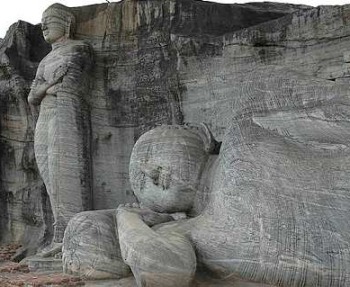 << The reclining Buddha at Gal Vihara in Sri Lanka measures 14m in length while the upright one is 7m high.

The Buddha knew that he was not destined for everyday death but “parinirvana” — a state defined as “the extinction of the endless round of illusion and needless suffering”.

The second puzzle is the typically extravagant size, which may seem outrageous to anyone familiar with Christian statues or the Buddhist emphasis on moderation. This time, the explanation is less simple, with roots in a legend that has a Freudian fairytale feel.

The legend centres on a giant called Asurindarahu, who had more pride than a NBA megastar. When confronted with an opportunity to meet the Buddha, the giant was torn. On one hand, he yearned to see the Buddha. On the other, because he was equipped with an ego on par with his epic proportions, he was loath to bow before him, the story goes.

Just to rub it in, the Buddha commented that the giant was only a big fish in a small pond. Humiliated by the lecture and the awesome display of soft power, Asurindarahu duly kowtowed, even cringing “like a spider clinging to the hem of his robes”.

The size and splendour of reclining Buddha statues may make the traveller feel humbled, too. In particular, the reclining Buddha that graces Bangkok’s 8ha Wat Pho is tremendously imposing, all the more so because its feet and eyes are engraved with mother-of-pearl.

Its fame amplified by its closeness to that backpacker hive, Khao San Road, the monumental Wat Pho statue exerts more allure than any other cultural attraction in Bangkok. The statue might be classified as one of the seven wonders of Asia, up there with the Taj Mahal. Or it could be viewed as a cliché — just another sight to see, revere and grab on your memory card before uploading to an inexhaustibly rich, people’s gallery like Flickr.

Either way, Gach is more impressed by the reclining Buddha on show at Shanghai’s Jade Buddha Temple, the best-known Buddhist temple in town. Aside from the fact that the Shanghai Jade Buddha assumes the classic position, Gach rates it highly because it is carved from a single chunk of jade nud­ging the 2m mark.

“In and of itself quite remarkable,” Gach says. “And the sculpture itself seems to possess a certain aura that speaks for itself — as does the Sphinx, Mona Lisa, etc,” he adds.

Another bewitching but spectacular reclining Buddha occupies Chaukh­tatgyi Temple in Burma’s capital, Yangon. Like Penang’s example of the breed, it boasts what resembles heavy makeup, a shimmering golden robe and feet the size of Langkawi. It is squeezed into an open-sided, steel-and-corrugated iron structure which, as one blogger notes, looks more suited to hosting a rock band than a religious seer.

In defiance of physics, still another giant reclining Buddha has gone missing altogether.

If its big brother surfaces soon, it may briefly be the world’s largest — even more gigantic than Burma’s titans. The Burmese like their reclining Buddhas to be sensational. The hollow reclining one in Monywa, central Burma, which you can walk through, stretches 90m and is acclaimed as the world’s largest.

Still, both contenders look set to be eclipsed by an incomparably colossal Middle Kingdom effort. A stone reclining Buddha being carved in east China’s Jiangxi Province will reportedly stretch 416m — the length of an oil tanker.

However dazzled you may be by the grandeur and glamour, just remember one thing: do not to fall into the trap of referring to any reclining Buddha as “sleeping”. True, the Buddha, being human, took nightly downtime like anyone else. But his name means “The Awakened”.