Journeys of Body and Soul

New York, USA -- You see them prostrating themselves along roads in Tibet, circumambulating stupas in Burma, crowding temples from Nepal to Sri Lanka, Thailand to Japan. They don't wear the same clothes, don't speak the same language, don't always follow the same doctrines—but they share the desire to travel to a sacred Buddhist site in a tradition of pilgrimage that is as old as mankind itself. 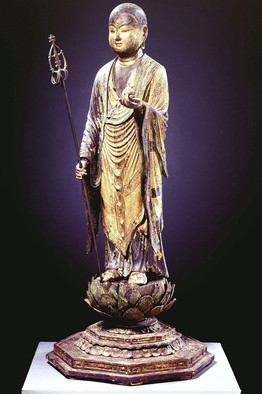 << Japanese statue of Jizo Bosatsu, from the 13th century.

The Asia Society Museum explores the art that grows out of this journey in "Pilgrimage and Buddhist Art," a show whose range is so great you sometimes feel you are bouncing from culture to culture, never lingering long enough to engage. But if this eclecticism is the show's greatest weakness, it proves also its greatest strength. In the end, the rich and varied visual experience imparts a visceral sense of the dynamic practice of pilgrimage—a practice still very much alive, as highlighted by the inclusion of three contemporary videos.

The show begins rather predictably with sculptures depicting seminal moments in the Buddha's life, whose sites were the first to attract pilgrims. Chief among these are the Buddha's achieving enlightenment at Bodh Gaya—represented through sculptures from India, Tibet and Myanmar—and his first sermon at Sarnath, illustrated by a sixth-century Gupta bronze.

Beautiful as these statues are, however, it is a 1710 Japanese woodblock that deserves special attention. A world map from the perspective of a famous seventh-century Chinese pilgrim, it relegates Europe and the Americas to footnotes at the edges while placing the Buddha's native India front and center. It is appropriately large, with a topography of jagged mountains, wandering rivers and a single spiraling vortex that represents the mythical Mount Meru. According to Sanskrit scriptures that predate Buddhism, this marks the center of the universe.

As the next gallery makes clear, Buddhism symbolically incorporated Mount Meru into one of its central monuments: the stupa, a dome-shaped construction that houses relics and sacred objects, such as the amber and gold that glimmer faintly in the center of a third-century crystal stupa-shaped reliquary from Sri Lanka.

As bearers of the sacred, stupas were (and still are) instrumental in announcing the presence of Buddhism—and creating new destinations for pilgrims. Which brings us to the next and largest section of the show: four galleries devoted to the act of pilgrimage itself, from depictions of famous pilgrims to statues of protectors, banners from famous sites, and accessories for the road such as Tibetan amulets, a prayer wheel and an almanac to calculate auspicious travel times.

Among the most beautiful pieces is a 13th-century Japanese statue of a popular bodhisattva, Jizo Bosatsu. Holding a staff in one hand and a wish-granting jewel in the other, he stands on a lotus, clad in robes that ripple delicately down and across his body. For originality, though, nothing tops the 17th-century portable shrine made entirely of silk with, inside, the figure of a bodhisattva in a spidery structure of looped gold thread. The overall form is Japanese, the inscription on the back Chinese, and the decorative embroidery Southeast Asian in feel.

More than illustrating regional styles, the objects make you realize the extent to which Buddhist pilgrimage, like many religious practices, is a living palimpsest of traditions and beliefs.

Take, for example, a 33-inch-long 18th-century painting of the trek to Gosainkund, a site revered by both Hindus and Buddhists. From left to right the eye travels in a green and red landscape past monasteries and palaces into mountains where monks meditate in caves, Hindu ascetics sit on tiger skins, and pilgrims variously worship before Shiva lingams and Buddhist stupas. About three quarters of the way to the sacred lake, we see pilgrims, packs strapped to their backs, negotiating a peak so steep that one man walks perpendicular to the slope, so that he appears horizontal.

In a variation on the theme, an early 19th-century Hokusai woodblock print shows pilgrims climbing Mount Fuji. An 18th-century scroll by Korean court painter Kim Hongdo captures the swoosh of water in and out of a pond on Diamond Mountain. By the time Buddhism came to Japan and Korea, both mountains were sacred for Shintoists and shamans, respectively. But Buddhism claimed them as it spread. Not coincidentally, Hongdo's mountain pool echoes the shape of a monk's Buddhist bowl.

To the extent that these works offer a road map of sorts, they encourage Buddhists to pick up their staffs and set out from home. Others, however, embark on a virtual pilgrim's journey. Mandalas are usually associated with Tibet and the visualization practices of Tibetan Buddhism, but here we also find Japanese mandalas. In one, the mind travels in and out of the temple complex of the Nachi shrine, a popular pilgrimage site. Another invites the viewer to reconstruct the story, told in symbols, of a beloved deity paying homage at Sarnath under a golden moon.

The last gallery returns us to the physical manifestation of pilgrimage, complete with offerings—in a video, pilgrims pat gold leaf onto a reclining Buddha—and souvenirs. Most of the mementos on display relate not to the site, but to the Buddha, whether in the form of his footsteps outlined on a Chinese painting or votive tablets from across Asia with reliefs of the Buddha at the moment of enlightenment—a reminder of what sparked the journey in the first place.

Ms. Lawrence is a writer based in Brooklyn, N.Y.