Seoul, South Korea -- For many visitors to the National Museum of Korea in Yongsan, Seoul, one treasure in particular stands out as an emotional favorite. 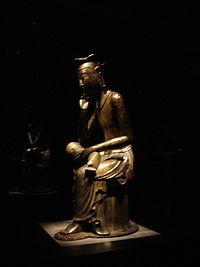 A singular bronze statue is lit with a halo of soft light in a darkened room all by itself, which dramatically increases the effect it has on viewers, and allows people to focus all their attention upon it. Every time I have led tours of this grand museum, one of the best such institutions in all of Asia, my guests and I spend a long time just gazing upon this ancient Buddhist artwork with admiration and inspiration.

This renowned icon is named the ``Geumdong Mireuk-bosal Ban-gasayu-sang," which literally means "Gilt-Bronze Maitreya Bodhisattva Half-sitting Thinking Statue." It is widely acknowledged to be one of the finest Buddhist sculptures ever produced, considered a masterpiece of Korean art and paragon of similar icons throughout East Asia. It has been designated Korea's National Treasure No. 83, and has already appeared as an emblematic image on many promotional publications. It is insured for an estimated 50 billion won ($48 million), although truly priceless in its value to Koreans.

Despite its fame, its origin remains somewhat mysterious. After careful inspections of its artistic details, it has been declared by experts to have been cast during the seventh century. But where it was enshrined before modern times has never been definitely determined, and scholars cannot be sure whether it was created in the Silla Kingdom, or the Baekje Kingdom during the Unified Silla Kingdom that began in the last quarter of that century. Most experts seem to believe it was created by a Baekje craftsman either before or after the fall of his kingdom, because that region has always enjoyed a reputation for the very highest artistic skills.

This Ban-gasayu-sang is 93.5 centimeters tall, and is quite valuable just on that account because few large bronze-works survive from that period or before. It was originally plated with  thin layer of gold, but only traces of that now remains on the aged bronze. This one in the National Museum is considered the best of all, but there are quite a few other early examples of its motif in Korea and other oriental countries, in all sizes smaller than this treasure.

This icon represents the deity Koreans call ``Mireuk-bosal,'' known internationally by the Sanskrit and English name Maitreya Bodhisattva. ``Mireuk" is considered to be a fully enlightened being who will appear upon earth as the Future Buddha, a kind of avatar of perfect wisdom and compassion.

Most types of Buddhists in the world believe that the Dharma (teachings) of the historic Siddhartha Gautama Sakyamuni Buddha, the founder of Buddhism somewhere around 500 BC, is slowly degenerating and dissipating due to human inability to fully understand, practice and transmit it beyond a relatively-few enlightened masters. At the time when the original Dharma is completely exhausted and forgotten on earth, the tradition holds, Maitreya will manifest to us in a state of perfected human divinity, and teach a fresh and more advanced Dharma to all humanity. All sentient beings of the universe will finally achieve enlightened salvation, freed from karmic suffering, or at least will have the opportunity to do so if they follow the new teachings. Mireuk will therefore be the legitimate successor to Sakyamuni in a cosmic lineage, and there has been much expectant prophecy about the timing and nature of his incarnation, with an amazing variety of variations on the theme.

Each Buddhist nation fervently hopes to be the site of this Buddha-of-the-Future's arrival, and Korea is no exception. The cult of Mireuk-bosal is thought to have been introduced to Korea by Silla's great master Won-gwang upon his return from studies in China around 600. Since that time thousands of images of him as a manifested Buddha have been created around Korea, especially stone statues and carvings.

Almost every "standing" statue or carving on boulders or cliffs of a Buddha that is found in Korea is indeed a Mireuk Buddha, generally with a distinctive pagoda-style hat, long thin body, handsome face with black curly hair and with one hand raised in a gesture of peace and generosity. They are depicted in a remarkable variety of styles, from primitively crude to profoundly sophisticated. They make a strong contrast to the famous and popular Chinese folk-buddhist Maitreyas, extremely fat, bald and laughing uproariously ­ a clear distinction between the Buddhist artwork traditions of the two neighboring nations.

The Ban-gasayu-sang statues are a different and rarer motif, rarely ever found outdoors on cliff-carvings. These depict Mireuk while he is still a Bodhisattva, waiting in the Tusita Heaven for his opportunity to appear on the Earth. He is positioned at ease, with one leg folded up in meditative position but the other extended down to the floor, one hand resting on his lap and the other raised so that his fingers are touching his chin or almost touching it, as if lost in deep thought. With a look of compassion for the suffering of all beings so deep it defies description, he is said to be in the contemplative pose, thinking of all he will do towards the salvation of humankind. These icons are therefore popularly referred to as the Contemplative Buddhas, and the best of them are often compared to Auguste Rodin's famous statue "The Thinker" because of their thoughtful pose.

What is perhaps the second-best of these gilt-bronze statues extant in Korea is housed in the Buyeo City branch of the National Museum. A bit shorter at 83.2 cm, but nearly as evocative with only the hint of a smile, this one is designated as National Treasure No. 78.

The Ban-gasayu-sang in the National Museum of Korea is perfectly proportional, appearing almost lifelike, and the sensuality of the draping of both his lower robe and the covering of his stool suggests that the sculptor based this work on a real model. The bodhisattva wears a very simple tri-fold crown on his head, in contrast to the highly elaborate headdresses on other works of this genre, which seems a very nice touch of simplicity and humility, classical Korean motifs. Its sense of peaceful harmony is nearly perfect, and the sweet wise smile on his face endears all viewers to him, in an intuitive emotional way.

There is just one other similar statue of this deity in the world that equals the quality and significance of this one, and remarkably enough, it is one of the greatest national treasures of Japan. The "Miroku Bosatsu" statue at the Koryu-ji Temple of Kyoto is virtually the twin of this Ban-gasayu-sang, although it was carved from red pine rather than cast from bronze. Experts on oriental art agree that it is almost certainly of Korean origin, probably brought to Japan as a gift by Korean missionaries when they were introducing civilization to those islands in sixth century. It may even be the statue that the ``Nihon Shoki" historical record mentions that a King of Silla sent to the Yamato court. Chances are high that it was carved as a copy of the bronze original, out of pinewood so as to be lighter and more easily transported.