What do Goryeo buddhist paintings tell us about Goryeo people?

Seoul, South Korea -- A quick survey of the 133 extant paintings of the Goryeo Kingdom (936-1332) discloses a seemingly pre-occupation of the afterlife and how to arrive there in proper Buddhist fashion. 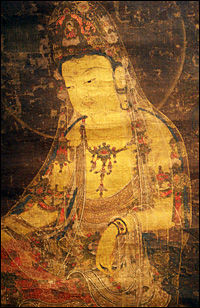 << This Water-Moon Gwanseum painting is on display at the Metropolitan Museum of Art, New York. / Korea Times files

Of these 133 paintings, 110 depict the Western Paradise (Buddhist heaven) as a landscape; ``Amitabul’’ (Amida, Lord of the Western Paradise) arriving with the bodhisattvas ``Guanseum’’ (Avalokitesvara) and ``Taeseji’’ (Mahasthamaprapta) to accompany the believer to this paradise; Guanseum alone, usually in the transformation of this bodhisattva as regent of the island Potala; and Jijang (Ksitigarbha), the bodhisattva who succors those in hell. Were the people of the Goryeo Kingdom, then, obsessed with their post-mortem fates?

In fact, this would be an over-simplified conclusion based on visual evidence alone. Who were the people we refer to? All of the surviving Buddhist paintings of the Goryeo Kingdom are crafted by the most highly-skilled artisans, monk painters trained in clerical studios, utilizing materials ? including gold and silver paint ? that could only be afforded by royal or aristocratic commissions.

The line and figural drawings and coloration represent the apogee of Korean Buddhist painting, combining a high-Tang naturalism in volume and the fall and fold of cloth with highly idealized characterizations, and a high refinement of technique.

A thin base-coat of lead, which saturates the silk to provide a resilient surface, is applied in the shape of the bodies, on which is applied with the minutest detailed jewels, medallions, robes, flesh, facial features, and even translucent veils. In view of the elevated quality and cost of these paintings, it is unlikely ``the people of the Goryeo,’’ beyond the most wealthy, saw them at all. The commoners’ exposure to Buddhism for the most part entailed participation in large-scale national protection and repentance festivals. The paintings that represent Goryeo Buddhism in the present were commodities of an elite and exclusive cultural milieu.

Were the Goryeo aristocracy, then, unusually pre-occupied with the afterlife? In fact, the Buddhist painting of the Heian (897-1185) and Kamakura (1185-1333) periods in Japan also largely depict Amida and his paradise and bodhisattvas, suggesting a shared affinity for these themes between Korea and Japan. There are formal differences between Korean and Japanese renderings, however. Whereas the Japanese tended to animate scenes of Amida’s descent to retrieve the dead for his paradise (depicting him descending from heaven on a swirl of gold clouds) the Goryeo Amida and his bodhisattvas emerge along the ground plane as if walking out of an indeterminate, dark background. 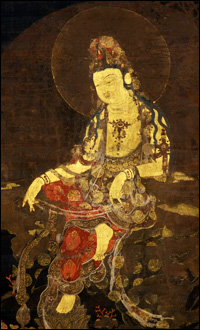 << This Water-Moon Gwanseum was on display at the Horim Art Center early this year. It is considered one of the best preserved paintings.

The solemnity and silence of their advent is palpable. Moreover, the textual source for these images in the Goryeo era appears to have been the Lotus and Flower Garland Sutras, in which Amida and Guanseum play relatively minor roles. Devotion to the Flower Garland or Avatamsaka Sutra has been strong in Korea since the Unified Silla period, and its Samanthabadra chapter especially praises Amida: ``At the very end of my life, I hope to be reborn in the Pure Land of Amitabul and to face Amitabul after overcoming every hindrance,’’ so reads a line from this chapter, which is inscribed on a Goryeo Amida painting found today in the Shimatsu family collection in Japan.

The Potala Guanseum, or Water-Moon Guanseum?wherein the bodhisattva is situated on a rock in elegant princely attire, bending his head gently to hear the appeal of a small boy at his feet _ clearly derives from the Avatamsaka Sutra, for it depicts the scene described in the Gandavyuhasection of that sutra where Sudhana, a spiritual seeker, visits Guanseum on Potala, among 52 other spiritual advisors, on his way to meet his final master, the bodhisattva Samanthabadra, who will praise Amida as quoted above. This scene is also the subject of noted Liao (916-1125) dynasty sculptures some two hundred years earlier. The selective reading of the Avatamsaka Sutra by Goryeo aristocracy suggests a conflation of highly speculative Avatamsaka thought with earthly concerns, thereby demonstrating the syncretic, and therefore durable nature of Avatamsaka thought in Korean Buddhism.

Japanese collectors have especially treasured Goryeo Buddhist paintings for their beauty and refinement, and most of them are to be found in Japanese collections today, having been traded there, or absconded during the Japanese colonial period (1910-1945). Hence, to paraphrase the bromide, ``Pilferage is the highest form of flattery,’’ and a sign therefore of excellence, no doubt.
One last observation remains regarding ``what Goryeo Buddhist paintings tell us about the Goryeo period.’’ The earliest confirmed dating among these paintings is a standing Amitabul ? rather stiff and two-dimensional by Goryeo standards ? dated 1286, over three hundred years into the dynasty. We can only assume the unrepresented years were a transitional period in the development of style and iconography, and it may have been the Tibetan-influenced Yuan Kingdom (1271-1368) that introduced the scrolled painting format to the Goryeo Kingdom.

-------------
The writer first came to Korea in 1980 as a student. His latest sojourn here began in 2001, when he came to Korea to write his Ph.D. dissertation on Buddhist paintings of the Joseon Dynasty.