Taipei, Taiwan -- When former minister of justice Liao Cheng-hao brought “Buddha’s finger” to Taiwan from China in 2002, it was hailed as the religious event of the year. The relic, believed to be one of the Sakyamuni Buddha’s digits, attracted an estimated 4 million viewers as it toured Taiwan, spurring renewed interest in Buddhism. 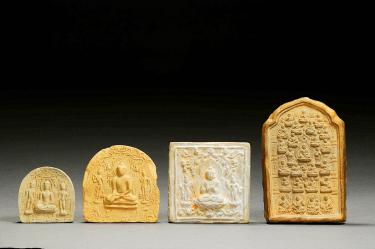 << Photos courtesy of The National Museum of History

Liao, the exhibit’s coordinator and a devout Buddhist, declares in the catalogue that just like the arrival of Buddha’s finger in 2002, which was intended to “bless the people of Taiwan ... ward off disasters and engender good fortune,” Imperial Treasures will help “to purify the soul, condense thoughts and ... cleanse political, social and spiritual pollution out of the system.” It should serve, he writes, as a defense against “distorted values and materialism” in contemporary society.

Raising the issue of materialism seems odd in the context of an exhibit that celebrates the material possessions of the temple, where even the most mundane objects were given artistic treatment worthy of the divine.

A tea mortar, for example, is made from gilded silver, the base and pestle intricately designed with images of flower pedals, flying horses and wild geese. Everyday items are refashioned into ostentatious objects; there are even hinges made from solid gold.

The flamboyant use of materials and creative design are most apparent in those objects directly associated with Buddhism. The statue of Bodhisattva that holds the remains of Buddha’s finger is an example of the era’s astoundingly sophisticated artistic achievements. The numerous reliquaries on display, made from crystal, jade and gold, justify the exhibit title’s argument that the Tang Dynasty was an era of intense artistic creativity in the service of Buddhism.

The designs in bas-relief reveal the mature craftsmanship common at the time, while patterns of a dancing musician carved onto the side of a gilded silver receptacle and a mural depicting two men playing polo give insight into the era’s leisure activities.

The superb presentation of Imperial Treasures, however, is offset somewhat by a flaw that seems to plague the National Museum of History: dating. The museum dates many of the objects according to the reign of a Tang emperor, without also presenting the corresponding year on the more familiar Western calendar.

For example, the aforementioned mural, a virtuosic display of intricate brushstrokes and lightness of execution, is placed beside a second, somewhat flat and rigid, mural of a warrior. If viewers knew that the first came from the middle of the Tang Dynasty and the latter from the end, they would be in a better position to comprehend how the internal struggles that plagued the dynasty on the eve of its demise had a profound effect on the quality of its art.

Regardless, one can understand from this exhibition why the Tang Dynasty is hailed as a high point in Chinese civilization.

As I wandered through the museum’s first floor where the exhibition is being held, I noticed Buddhist nuns in monastic robes ogling an intricately designed headdress of gold and precious stones, and austerely cloaked monks poring over a silver mirror decorated with bas-relief hunting scenes. Perhaps Buddhist rewards can be accrued in this life as well as the next.

Imperial Treasures reminds us that the close relationship between religion and politics common during the Tang Dynasty remains a living tradition in today’s Taiwan (albeit on a far smaller scale), where religious organizations, such as the Buddhist Fo Kuang Shan in Kaohsiung or Taoist temples such as Jenn Lann Temple in Dajia, Taichung County, accumulate vast amounts of wealth through political patronage and donations.

Imperial Treasures - Relics of Famen Temple Underground Palace and the Flourishing Tang, currently on view at the National Museum of History, complements the religious sentiments stirred up by the 2002 show.

The exhibition includes 61 artifacts rediscovered in the 1980s when a pagoda at Famen Temple, located 120km west of Xian, China, collapsed during a renovation project, exposing a treasure trove of 2,499 objects.

A further 59 objects are on loan from museums located in China’s Shaanxi Province and the Shaanxi Archeological Research Institute.

The exhibit reveals the intimate ties between Buddhism and the Tang Dynasty emperors, who were Famen Temple’s most devoted patrons.
Exhibition Notes:

What: Imperial Treasures — Relics of Famen Temple Underground Palace and the Flourishing Tang