Yangon, Myanmar -- Several hundred Buddhist monks marched on Myanmar's most revered temple in pouring rain Thursday to keep alive the most sustained and defiant protests against the military government in at least a decade. 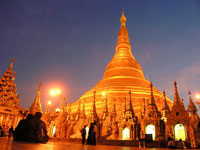 << Earlier this week, the gates to Shwedagon pagoda were locked

It was the third straight day the monks have gathered at the golden hilltop Shwedagon pagoda, which dominates the country's biggest city, Yangon. The gates have been locked to them, sending them off on marches through the city on Tuesday and Wednesday.

The monks' marches have given new life to a protest movement that began a month ago after the government raised fuel prices, sparking demonstrations against policies that are causing economic hardship.

200 monks were at the Shwedagon in the early afternoon, and about 400 monks were marching toward the temple in an orderly procession from Yangon's northeastern township of Yankin, led by three carrying religious flags. Both groups chanted two sermons, one associated with warding off misfortune and the other a wish for the well-being of all people.

Onlookers accorded the monks respect by making the traditional Buddhist gesture of hands clasped together in front of bowed heads.

In the Buddhist fashion of avoiding direct secular entanglements, the monks are making no explicit anti-government gestures, but their message is unmistakable to fellow citizens, because their normal duties outside their monasteries involve making morning rounds with begging bowls, individually or in small groups. They march calmly in long processions, two by two, though the city streets.

On Wednesday, a large crowd cheered as monks briefly occupied another pagoda in Yangon, during one of several marches around the country. The monks pushed past closed gates to occupy the Sule pagoda for 30 minutes before returning peacefully to their monasteries, witnesses said.

At least four separate marches by monks took place in Yangon, along with protests in at least two other cities, Sittwe and Mandalay.

The saffron-robed monks have become the leaders of a movement launched on Aug. 19, when a few hundred ordinary citizens marched to protest a government increase in fuel prices. Several hundred activists have been detained.

Angry over being beaten at an early demonstration, monks threatened to take to the streets this week unless the military junta apologized. The regime remained silent so they launched protests around the country Tuesday that have grown from several hundred monks to several thousand.

Monks also are refusing alms from the military and their families - an embarrassing gesture for the junta.

Monks, who are highly respected in Myanmar and integral to almost all aspects of daily life, have historically been at the forefront of protests - first against British colonialism and later military dictatorship. They played a prominent part in a failed 1988 pro-democracy uprising that sought an end to military rule, imposed since 1962.

The protests also reflect long pent-up opposition to the repressive military regime, and have become the most sustained challenge to the junta since a wave of student demonstrations that were put down by force in December 1996.

The junta's crackdown on the protesters have drawn increasing criticism from world leaders, including U.N. Secretary-General Ban Ki-moon and U.S. President George W. Bush, who also have called for the government to release opposition leader Aung San Suu Kyi.

Suu Kyi, a Nobel Peace laureate, has been under house arrest for more than 11 of the past 18 years.

The state-run newspaper, the New Light of Myanmar, claimed Wednesday that bogus monks, ``instigators'' and foreign radio station reports were helping to swell the crowds at protests.

Carrey's video message _ which follows a Myanmar petition signed two weeks ago by the likes of Anjelica Huston, Jennifer Aniston, Dustin Hoffman and Susan Sarandon _ calls on people to e-mail Secretary-General Ban and demand ``a strong response'' over the situation in Myanmar.