Burma: In Praise of the Buddhist monks

Yangon, Myanmar (Burma) -- As is evident by the pagodas, temples, monasteries, shrines and Buddha Images everywhere in Burma, 80 per cent of the population embraces Buddhism. It is a religion that seeks enlightenment to transcend human sufferings and cruelties. 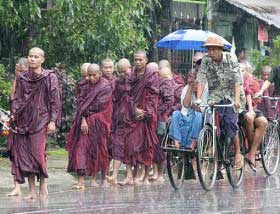 The path to enlightenment is through self-sacrifice, sharing, denouncement of worldly possession, acceptance of one’s place in the world, inner peace, harmony and meditation. Buddhism since the early centuries became a great Institution in Burma, and had become part of the Burmese culture and every day life of the individual.

Buddhist Teachings and Ethics have been regarded as the moral force and conscience that every Buddhist hopes to follow. Behind the respect of the moral rules lies the awareness of the law of Karma, which awards good deeds and punishes evil doing in this life and in the next. Enlightened self-interest therefore, prompts us to lead a good life.

Can the two military regimes that forcibly ruled Burma during the forty-six years call themselves Buddhists when between them they have done so many bad deeds and committed vast amounts of heinous crimes against their own people?  Because of them Burma is today a land of enslavement, forced labour, atrocity,  mass murder, ethnocide, genocide, greed, hatred, ignorance and poverty.

The Military Regimes have created a terrorist organisation that embraces an ideology and policy that are completely contradictory to the Buddhist doctrine. Through force, bribery and brainwashing the regime is engulfing more and more vulnerable people into their organisation of terrorism and crime.

It seems the Buddhist monks can no longer bear to watch the dire political, economical and human rights situation that has been brought upon the country and its people due to the misrule of the dictatorial regime. This has prompted the Monks to act and as the disciples of Lord Buddha, it is only right that they have come out in droves to demonstrate, and let the SPDC and their thugs know that their criminal acts which are contradictory to the teachings of Lord Buddha can no longer be tolerated.

These Buddhist monks have been very brave, and they have shown concern and compassion for the people. The people of Burma owe them a debt of gratitude and support. Let’s hope the Generals and their followers will come to realise that they cannot bribe the Monks by offering robes and food after their wrong doings, without showing remorse, and atone sincerely for their actions. Let’s hope that they will come to their senses and admit thatthey have failed the people of Burma, every single group of the population. It is time that they hand over power to a civilian government.

A Government is supposed to look after the welfare of its citizens, and as a member of the United Nations responsible for seeing that each and every citizen enjoys freedom and basic human rights.  But the Burmese Military Regime again takes advantage of its position, and contradictory to the United Nations Charters perpetrated all forms of human rights violations against the citizens.

The regime is a disgrace to the United Nations and does not deserve to be a member. Nearly all member Nation States have been patient and given the regime many chances, and urged them to hold a tripartite talk to bring about reconciliation and democracy,  but they remain unreasonable and continue to hold on to power.

Some Nation States have shown no concern about the extent of human rights violations going on in Burma and have given the excuse that they do not want to interfere in other country’s internal affairs. These countries are not only helping the Military regime but are also destroying the credibility of the United Nations. At present the people of Burma need the United Nations more than ever to oversee that the Military do not harm the demonstrators like they did to the students in 1988. They are barbaric and capable of anything.