YANGON, Myanmar -- Twenty thousand Buddhist monks and nuns marched in Myanmar on Sunday in the biggest challenge against military rule in the nation for nearly two decades. 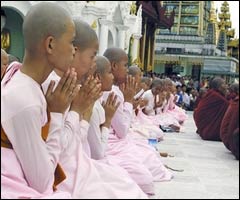 << Buddhist nuns and monks pray at Shwedagon Pagoda during a protest against the military government in Yangon.

Emboldened after a march to see Myanmar's democracy icon Aung San Suu Kyi one day earlier, they walked in the rain-sodden streets of Yangon from the golden Shwedagon Pagoda, Myanmar's most important landmark.

Numbers swelled as they crossed downtown Yangon and circled the Sule Pagoda, witnesses said. About 10,000 monks, many of them barefoot, were joined for the first time by nuns in pale pink robes. They were followed by 10,000 supporters.

"We want the people to join us," the monks chanted.

A group of about 200 protesters and monks carrying a sign reading "loving kindness will win every time" tried to approach Aung San Suu Kyi's house -- as they had successfully done on Saturday -- but were turned away.

Riot police equipped with shields blocked the road and fire trucks were parked nearby, and the monks eventually turned round and left the area.

Clapping onlookers and supporters earlier thronged the side of the road in downtown Yangon, handing out water and flowers and proffering balm for the monks' exposed feet.

"We want national reconciliation, we want dialogue with the military, we want freedom for Aung San Sun Kyi and other political prisoners," one protest leader cried into a microphone.

About 300 monks held a prayer vigil for one hour in Magway town, about 375 kilometres (230 miles) north of the commercial hub Yangon, while up to 500 monks joined a protest in the central city of Mandalay.

The protests followed a landmark day Saturday, when the army allowed about 2,000 monks and civilians to pass a roadblock and gather by the lakeside Yangon house which has been Aung San Suu Kyi's prison for 12 of the past 18 years.

Tears in her eyes, the woman known in Myanmar as "The Lady" waved at monks as they recited Buddhist prayers, witnesses said.

The 62-year-old has become an internationally recognised symbol of non-violent political change since her National League for Democracy won 1990 elections by a landslide -- a result never recognised by the military.

What began as a protest against economic hardship has now grown, with marches against military rule attracting thousands of young monks to the streets of Yangon and other cities since Tuesday.

US Secretary of State Condoleezza Rice warned that Washington was keeping a close eye on the protests in the country formerly known as Burma, and branded the military leadership "brutal."

"Certainly, we are watching very carefully and the President (George W. Bush) has been very outspoken about what is happening in Burma," Rice told reporters on the sidelines of the UN General Assembly in New York.

The United States and European nations are expected to spearhead a diplomatic blitz at the annual General Assembly this week in an apparent bid to lend support to the campaign, diplomats said.

The secretary general of the Association of Southeast Asian Nations, a regional group that includes Myanmar, said the organisation was also monitoring the situation.

The military -- which has ruled Myanmar in some form since 1962 -- faces a quandary in dealing with the protests, analysts say.

Launching a violent and public crackdown on deeply revered monks would outrage people in Myanmar and the international community, but doing nothing at all leaves the military regime vulnerable.

"If they crack down seriously on the monks it means it would also seriously inflame the rest of the population, including members of the military themselves, for attacking the sacred and very prestigious institution," said Debbie Stothard, of Thailand-based democracy pressure group Altsean Burma.

"So the military regime is really in a lose-lose situation."

The military normally does not tolerate the slightest show of public dissent, and authorities during the past month have arrested more than 150 people.