Thousands dead in massacre, body of monks dumped in the jungle

Yangon, Myanmar -- Thousands of protesters are dead and the bodies of hundreds of executed monks have been dumped in the jungle, a former intelligence officer for Burma's ruling junta has revealed. 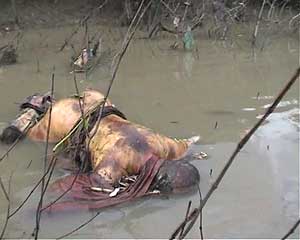 << A photo of a dead monk lying face down in a stream (Taken from the blog by http://ko-htike.blogspot.com/)

The most senior official to defect so far, Hla Win, said: 'Many more people have been killed in recent days than you've heard about. The bodies can be counted in several thousand.'

Mr Win, who spoke out as a Swedish diplomat predicted that the revolt has failed, said he fled when he was ordered to take part in a massacre of holy men. He has now reached the border with Thailand.

Reports from other exiles along the frontier confirmed that hundreds of monks had simply ' disappeared' as 20,000 troops swarmed around Rangoon yesterday to prevent further demonstrations by religious groups and civilians.

Word reaching dissidents hiding out on the border suggested that as well as executions, some 2,000 monks are being held in the notorious Insein Prison or in university rooms which have been turned into cells.

There were reports that many were savagely beaten at a sports ground on the outskirts of Rangoon, where they were heard crying for help.

Others who had failed to escape disguised as civilians were locked in their bloodstained temples.

There, troops abandoned religious beliefs, propped their rifles against statues of Buddha and began cooking meals on stoves set up in shrines.

In stark contrast, the streets of Rangoon and Mandalay - centres of the attempted saffron revolution last week - were virtually deserted yesterday.

A Swedish diplomat who visited Burma during the protests said last night that in her opinion the revolution has failed.

Liselotte Agerlid, who is now in Thailand, said that the Burmese people now face possibly decades of repression. 'The Burma revolt is over,' she added.

'The military regime won and a new generation has been violently repressed and violently denied democracy. The people in the street were young people, monks and civilians who were not participating during the 1988 revolt.

'Now the military has cracked down the revolt, and the result may very well be that the regime will enjoy another 20 years of silence, ruling by fear.'

'There are extremely high numbers of soldiers in Rangoon's streets,' she added.
'Anyone can see it is absolutely impossible for any demonstration to gather, or for anyone to do anything.

'People are scared and the general assessment is that the fight is over. We were informed from one of the largest embassies in Burma that 40 monks in the Insein prison were beaten to death today and subsequently burned.'

The diplomat also said that three monasteries were raided yesterday afternoon and are now totally abandoned. At his border hideout last night, 42-year-old Mr Win said he hopes to cross into Thailand and seek asylum at the Norwegian Embassy.

The 42-year-old chief of military intelligence in Rangoon's northern region, added: 'I decided to desert when I was ordered to raid two monasteries and force several hundred monks onto trucks.

'They were to be killed and their bodies dumped deep inside the jungle. I refused to participate in this.'

With his teenage son, he made his escape from Rangoon, leaving behind his wife and two other sons.

He had no fears for their safety because his brother is a powerful general who, he believes, will defend the family.

Mr Win's defection will raise a faint hope among tens of thousands of Burmese who have fled to villages along the Thai border.

They will feel others in the army may follow him and turn on their ageing leaders, Senior General Than Shwe and his deputy, Vice Senior General Maung Aye.

UN special envoy Ibrahim Gambari is still trying to set up a meeting with General Shwe.