Buddhists find voice to the United Nations via UNDV

Bangkok, Thailand -- Some 5,000 delegates from over 80 countries are being gathered in Bangkok, Thailand to usher in the United Nations Day of Vesak (UNDV) from May 28-30, 2015. This year's edition, the 12th in the series is being hosted by Thailand, after Vietnam which played host last year. This year's theme is "Buddhism and World Crisis". 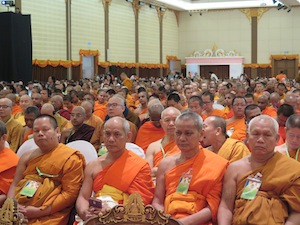 << More than 5,000 participants from 80 countries are gathered at Bangkok to commemorate the United Nations Day of Vesak 2015This year's event was opened by HRH Crown Prince Vajiralongkorn, who was represented by HRH Princess Bajrakitiyabha. The orgnisers also made honorary mention in honor of the 60th birthday of Her Royal Highness Princess Maha Cakri Sirindorn

This year's event was opened by HRH Crown Prince Vajiralongkorn, who was represented by HRH Princess Bajrakitiyabha. The orgnisers also made honorary mention in honor of the 60th birthday of Her Royal Highness Princess Maha Cakri Sirindorn.

The Day of Vesak marks the birth, the Enlightenment and the passing of the Buddha. The three major events in the life of the Buddha signal the birth of Buddhism, a great phenomenon in the history of mankind. For this reason many Buddhist countries such as Sri Lanka, Myanmar and Laos observe the day.

The commemoration of the Day of Vesak by Buddhists everywhere in the world aims to worship and honor the Compassion, the Wisdom and the Purity of the Buddha who taught humanity to be kind and tolerant towards each other, qualities which foster world peace.

In November 1998, at the International Buddhist Conference in Colombo, Sri Lanka, all member countries unanimously expressed the intention to gain International Recognition for the Day of Vesak, a symbol of the birth of Buddhism.

United Nations representatives of the following countries - Bangladesh, Bhutan, India, Laos, Maldives, Mongolia, Myanmar, Nepal, Sri Lanka and Thailand - proposed to the UN General Assembly to adopt the resolution for the international Recognition of the Day of Vesak.

On 15 December 1999, the Plenary Meeting of the UN General Assembly at its 54th session considered the agenda item 174 and adopted the draft resolution for the International Recognition of the Day of Vesak and for the appropriate arrangements for its observance at the UN Headquarters and other offices of the UN. 34 countries sponsored the draft resolution.

Since 2000, on the full-moon in the sixth lunar month of the Day of Vesak, Buddhist countries have joined in the commemorative event at the UN Headquarters. Sri Lanka took the lead to coordinate the event in 2000 and 2001, followed by Myanmar in 2202, India in 2003. Thailand had the honor of hosting the event since 2004, apart from 2009 and 2014 when Vietnam hosted the event.

UNDV is organized by the International Council for the Day of Vesak (ICDV), with its secretariat based at Mahachulalongkornrajavidyalaya University located in Ayutthaya, Thailand. The ICDV acts as the center for international Buddhists to organize suitable commemorative activities in honor of Vesak.

As a consequence of the regular and on-going activities of the ICDV, the Economic and Social Council (ECOSOC) of the United Nations granted special consultative status to the ICDV on July 2013.

This means that whatever that has been discussed at the UNDV shall be reported to the UN via the ICDV, which serves the role as a permanent platform for Buddhist voices to be heard at the UN and influence decisions of the world body.

This year's UNDV celebrations will explore the theme “Buddhism and World Crisis”. The conference will focus on four areas of concern, namely:

52 papers are slated to be presented. A select panel of experts for each of the four areas identified will present their findings to the ICDV, from which a declaration will be issued on the final day of the conference. The adoption of the declaration and resolutions adopted will then be forwarded to the world body.