Bangkok, Thailand -- The roar of bombs. The macabre, pervasive scent of death. In the deep South and across the whole globe, strife in the name of religion is steadily growing. 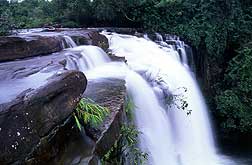 << Different streams, one waterfall: At the core of truth, all religions teach people not to be selfish and cling to the illusions of life.

But there was one remarkable friendship that cut across religious boundaries: The friendship between Buddhadasa Bhikkhu and a devout Muslim named Haji Prayoon Vadanyakul.

Born to a Muslim family, Haji Prayoon was well-known among his close associates for his seriousness in practising his religion. But his interests were not restricted to Islam. He was sent to a Christian school, and later made friends with several Buddhists. One day he decided to travel to the Suan Mokkh forest monastery to pay a visit to Buddhadasa Bhikkhu. He travelled with a monk named Phra Kuang Muttipatto. Back in 1955 the journey to Chaiya was not at all an easy one.

"We had to take a train from Bangkok and arrived in Chaiya at 4am. Phra Kuang and I had to wait at the station until there was enough light. Then we walked across fields and forests. It was the rainy season, so every now and then we had to wade through water as deep as our chests. But I never thought of quitting.

"I used to climb up Phu Kradueng in Loei when it was still a jungle. That was really hard - but at the top of the hills, the fresh, pure air made me feel as if I was in another world, and all the exhaustion went away.

"I had to walk a long time before I reached Suan Mokkh, but I didn't feel tired at all. I was comforted by the thought that I was going to have a taste of dharma from a monk, one whose ideas were much different from what I'd heard, as if they belonged to another world." 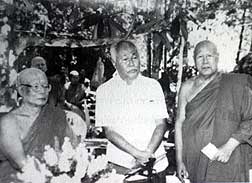 "The way Than Acharn [Buddhadasa] discussed Buddhism, it sounded as if he was guiding me toward the goal of Islam as well.

"Truth exists in both [religions], but lacking are those who can show that they are one and the same. Most people keep their guard up during [inter-religious] dialogue. That's not true education. They try to discredit others; that's not the path toward mutual understanding."

On that very day, it could be said Haji Prayoon found a guide to lead him toward the same truth. Religious differences did not pose a barrier, but instead served to help him attain the essence of his own faith.

"The kind of Buddhism I learned about was mundane, at the ethical level. Nothing special about it. But having met Than Acharn, read his books and contemplated them, I came to understand the ultimate truth.

"From that day on, I continued to study his books, comparing them to the Koran, and I became more and more enlightened. I didn't come to pay respects to him that often. I only came once in a long while. But there was this deep tie. Every time I visited him, it was like I came to report to him about my spiritual progress. This mutual understanding kept me growing steadily.

"I try to avoid saying that Buddhadasa's views are the right ones. Otherwise some others [schools of thought] might charge me with being presumptuous. They might say, 'How do you know that your teacher is correct?' I'd rather say that his views are sensible and sound. Other people may not agree with me. But his views of Buddhism helped me to understand Islam correctly.

"The Muslims like to lull their child to sleep by a short phrase - 'La illaha ill-Allah' - the declaration of truth made during prayer. They will keep reciting 'La illaha ill-Allah' on beads - until they achieve a state of mental concentration. Unfortunately, most people do not understand the core meaning; they usually translate it as 'There is no god but Allah.'

"The word 'Allah' consists of three letters: A, L and H. The word 'Araha[t]' consists of the letters: A, R and H. Typically, the L in the West has been transformed to R in the East. Thus 'elephant' becomes 'Erawan'. So does 'Ali' [the Noble] become 'Ariya' as in Ariyasaj [The Noble Truth].

"I used to discuss these linguistic issues [with others]. Here I repeat it for those who haven't heard about this principle. Allah is in fact Arahat. The meaning of Allah is broader than Illaha, which means 'idols', and La, which means 'no', or 'do not'. Most of the Muslims take Illaha to mean things like sculptures, trees and so on. But I think [the word] refers to the clinging to that very object in their heart. Those statues and trees are in themselves nothing sacred.

"But when people hold on to such things, they become objects of worship. If people do not hold on to them, they cannot be sacred. These things don't have their own power; it's the people who give them power. Therefore, illaha does not refer to those external objects, but to the clinging in human heart. So the sentence illaha ill-Allah means not to hold on to anything. Such is the state of Allah, or Arahat. How that is literally identical to the heart of Buddhism that professes against any attachment! How couldn't I say then that the heart of Buddhism is one and the same as that of Islam?"

When one is able to grasp the common essence, external differences no longer pose a problem. For example, Haji Prayoon continued to practise his routine prayers even when he went to study dharma with Buddhadasa at Suan Mokkh.

He once related another story about Buddhadasa:

"Than Acharn told some students of his that he would like me to go on the haj [pilgrimage]. He didn't talk to me in person, but somebody told me that he once said, 'If Khun Prayoon could go on a haj, it would benefit the religion greatly.' He said so when I went to say good-bye to him. Originally he wanted to go bid me farewell at Don Muang [Airport]. But his students said he was tied up with another appointment. Otherwise, it would have been a puzzling event, that a Buddhist monk went to see a Muslim off on a haj.

"I want to stress that I don't see him as a Buddhist, nor does he see me as a Muslim. He usually says that I do not belong to any camp, that I'm someone who really knows him. It's a matter of being two fellow humans.

"Than Acharn wants every religion to unite to bring peace to the world. He once told me, 'Khun Prayoon, let's work together to merge religions.' I told him that, on the level of customs and traditions, it might not be possible. For example, at the time of death, some groups want to bury [the body], other groups want to burn [the body]. But at the level of truth, even though we don't merge, they are already one and the same. It is the individual religious teachers who can't arrive at the truth. It is not the case that religions can't reconcile, if we take their purpose as the goal, be it on the mundane or supra-mundane level."

Haji Prayoon was a driving force in propagating Buddhadasa's ideas of inter-religious understanding - through his writing, talks, and donations - to the point that some of his cohorts charged him of being haek khok (literally, "breaking out of the cage; rebellious").

"This understanding is not limited to the thing called religion, be it Buddhism, Christianity, Islam, Brahmanism, Sikh and so on. It's about understanding dharma that has no other name besides dharma.

"The enemy of religion is the absence of dharma. Religions cannot be like men rowing different boats, trying to compete against each other. They must be rowing the same boat and helping each other. We need cooperation to save the world. We have to chip in, not fight and quarrel against one another. But whichever religion one wants to follow depends on one's individual preferences.

"Every time I take part in helping any religion, I just hold to one principle: To spread the rightful dharma among the people, for it's what the world urgently needs - that's all.

"When a monk comes to take up abode in the compound of my house where there are a lot of trees, I only have one request: When asked for some auspicious objects, please give the people Lord Buddha's dharma and not something superstitious like an amulet. Otherwise I have to ask him to leave. Buddhism must be preserved, even in a Muslim house. And we have to do it seriously to shore up Buddhism.

"Every religious person must help out. Whenever we see the decline [of any religion], we have to step in to correct it.

"Those who are still hung up with the old beliefs and values, be careful lest you become like the dinosaurs. This is the age of computers, of space [travel]. We have to catch up, otherwise we'll be left behind.

"In Thailand nowadays the [development of] thoughts and practice has progressed to the stage where there is this ahimsa-karma [non-violence] among different religious proponents. They share ideas and help bring peace to society, and eventually to the world. I can see this is hard work. But never give up. This ideal has already taken place at Suan Mokkh, with Than Acharn as the leader of the movement. This mission will be carried on by his students, and many more who will share his ideals in the future."

The seed of friendship planted in 1955 continued to blossom until their very last days. Coincidentally they both passed away in the same year.

Both Buddhadasa and Haji Prayoon not only taught us to understand that true religions only differ on the outside, but that at the core, they all aspire for the same goal.

Both also led their lives by showing that friendships among different religions are possible.