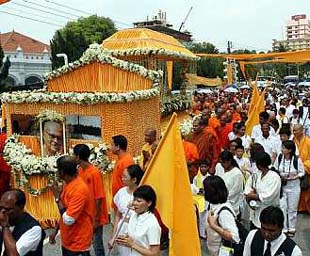 “Rev Dhammananda served not only the Buddhist community but also all mankind. It is for this reason that he won the respect of people of all races and religions,” said Housing and Local Government Minister Datuk Seri Ong Ka Ting, who represented the Government at a eulogy ceremony at the Buddhist Maha Vihara here yesterday.

Ong said Rev Dhammananda, who founded the Buddhist Missionary Society Malaysia (BMSM) in 1962, had conveyed Buddha's message on peace to every corner of Malaysia as well as throughout the world.

Rev Dhammananda, he added, would always be remembered for his strong role in promoting inter-religious harmony in the country.

“He was a firm believer that all religions have an important role to play in making human beings behave in a noble manner,” he said.

Through the BMSM, Rev Dhammananda published 70 books which were translated into more than 16 languages. Ong added that Rev Dhammananda never wanted any fame or glory and had lived the life of a simple monk.