Kathina Ceremony and its Meaning

Bangkok, Thailand -- When Buddhism was first established in ancient India, there were few monks and nuns.  These monks normally did not stay in fixed places or temples but rather spent most of their time moving from one place to another as it was their mission to spread the teachings of the Buddha for the happiness and welfare of all people and living beings. 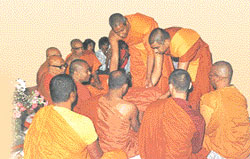 In those days, there were no paved roads, so during the rainy season when the country experienced heavy and frequent rainfall, their travels were often impeded and interrupted.  In this season, the farmers also cultivated their land and planted new crops.

Because travel was inconvenient, The Buddha allowed his disciples to stop wandering and take up temporary abodes during the rainy season.

This corresponds approximately from early July through late of October in the Gregorian calendar. In this year, 2006, the Rains Retreat started on July 11th, and ended on October 7th.

About four or five years after attaining Enlightenment, the Buddha was dwelling at Jetavana Mahã Vihãra near Sãvatthi City, the capital of the Kosala kingdom ruled by King Pasenadi.

A group of thirty monks who had been ordained by the Buddha himself came from Sãket city east of Sãvathi just after the three months Rains Retreat Observance to visit the Buddha. The Buddha greeted them, asked them about their retreat and journey, and noticed their wet and torn robes. The lady disciple of the Buddha, Visakha Mahã Upãsikã was also there visiting and listening to the Buddha expounds the Dhamma. When she saw the monks in tattered and worn robes, she asked permission of the Buddha to offer new robes to the monks, and the Buddha granted her request. Since then the Buddha granted the monks the opportunity to search for robes in various places and even to accept robes offered by donors during the period of one month from the middle of the Eleventh Lunar Month to the middle of the Twelfth Lunar Month. This period is called Kathina.

As there were no sewing machines or textile factories in those days, the preparation of robes for monks required a lot of manpower and coordination. It could not be done in a single day.

The Buddha realized this problem and allowed his lay disciples to prepare and make robes for any monks who needed them. The process required searching for appropriate cloth, washing it, cutting it, sewing the pieces together into robes, coloring the robes, and drying them. After that, the robes were distributed to the monks who needed them with the consent of the Sangha, the community of the Monks.

Nowadays, lay followers prepare robes for the monks but not in the same way as it was done in the time of the Buddha. They are two ways in which monks may obtain robes, namely: (1). by searching for them in various places like cemeteries, cities, and towns, or (2) by accepting offerings of robes from the people.

According to Vinaya Pitaka, the Theravada Book of Discipline, during the three month period from mid-July to mid-October, monks are required to take up a settled residence and are allowed to leave their encampments only under special conditions.

In this environment, the wandering mendicant nature of the Buddhist monk began to change. In particular, a number of customs and practices of a collective life, including the recitation of rules and the distribution of robes, became incorporated into the annual cycle of monastic life.

These ceremonies have continued through the ages and have evolved from culture to culture. The traditions of Theravada Buddhism spread throughout Southeast Asia as Buddhism won the favor of ruling monarchs in Burma, Laos, Cambodia, and Thailand. Theravada Buddhism expanded greatly in Thailand under the patronage of King Ramkhamhaeng.

Today in Thailand, the Kathina ceremony provides one of the most popular occasions for merit-making. The Buddhist people celebrate this robe- offering ceremony with profound respect and devotion to the monks, who have just spent three months in the monastery observing the Vassã (Khao Pansã in the Thai, Lao, and Cambodian languages) –the Rains Retreat. In rural Thailand, everybody in a village will participate in the Kathina ceremony as a community activity which may last anywhere from one day to as many as three days.

Why have I proposed this idea? Because during this period North America experiences heavy snow and bad winter weather which makes it very difficult for monks to travel and perform their missionary duties of spreading the Dhamma to all living beings.

Among the Buddhist of Southeast Asia, there is a very grand festival at the end of the observance of the Rains Retreat. People offer food to the monks in monasteries and prepare the special yellow robes that are offered to the Sangha.

This special offering is called the Kathina Offering Ceremony. It is done only during the period of time starting from the end of Rains Retreat to the first day of the waning moon of the 12th Lunar Month, as previously mentioned.

1. Monks who receive the offerings and the members of the Sangha, can go from places to place for their Dhamma works and meditation practice without needing to inform any monk in the monastery.

2. Monks do not need to carry a complete set of robes when they go anywhere to carry out their religious duties.

3. Monks can have their breakfast and lunch in different places offered by different donors without breaking their monastic rules (Vinaya).

4. They can keep other robes according to their wishes for more than ten days without breaking monastic rules.

5. The robes offered to them by donors are suitable and good for them, so they can extend their time to search for another set of robes for four months through out fall and winter.

6. The Buddhist followers support and help the monks to maintain the Buddhist teachings and tradition for world peace.

7. Those who support the Monks and the Sangha are always happy, joyful, and wealthy.

8. They promote Buddhist Teachings in Western society where people are Seeking Spiritual food for their hearts, and need spiritual and moral training.

9. The Monks have no worry about searching for cloth to make their robes, and in this way they have more time to concentrate on their Dhamma study and meditation practice, and can serve more people in their communities.

11. The donors follow the noble way of life and maintain a humane society on this planet.They are the source of peace and happiness for the world.

Where is Kathina Ceremony observed?

The Kathina ceremony is observed by Buddhist people in all parts of the world, not only in the Asian countries, but also in European countries such as the United States of America, Canada, New Zealand, and Australia.

According to Buddhist tradition, the robes prepared on this occasion were usually offered to the Monks who had old and torn robes which were insufficient to protect themselves.

The robes were made by the "Sangha", under the idea of coordination collaboration, harmony, and participation in religious and monastic service.

The process of making the robes was completed in one day, beginning with making the cloth, cutting, sewing, washing, coloring, drying, and organizing it into a set of three. Then, with agreement of the Sangha, the robes were offered to the monks through the ceremony. The Kathina Ceremony therefore is a community activity that needs to be performed in a harmonious way.

This is the Buddha’s idea of collaboration and harmony, of care and the loving way of the compassionate heart for community and social development and for human society as a whole. Buddha Vihara, the Midwest Buddhist Meditation Center as a new community needs coordination, collaboration and harmony, (Sukha Sanghassa Samaghi Samaghanang Tapo Sukho. Harmonious activity of the community is the source of happiness).