Sedgwick, ME (USA) -- Gentle Hearted Zen is not won or conferred; it has no badge of rank, no special clothing, no embroidered epaulets, no hash marks or any sort of uniform demarcations.  Its adherents and ardent practitioners may be laypeople, monks or nuns.  In Gentle Hearted Zen, a scorecard or Dharma lineage chart is but jest. 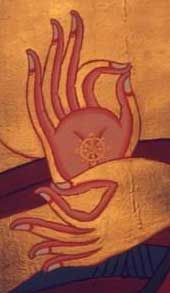 Gentle hearted Zen was brought to Japan from China by Dogen in the winter of 1227.  It is said in the Eihei koroku that on his return; eager Japanese monks asked Dogen “What did you bring back with you?

During those days it was expected that a far-traveling monk on pilgrimage would “bring something back” with him as evidence of his accumulation – some sort of solid, presentable proof or universal wisdom that testified, or served to witness the truth of his stories of his travels.

If a monk returned telling tales of sitting in meditation under the Bodhi tree, the legendary tree under which the Buddha himself sat when he awakened, then it was expected by the hearers of such remarkable feats that the monk would at least return with a leaf from the very tree itself. A bona fide of truth, the “real McCoy” A branch of the Bodhi tree, even better, an alive and growing scion would bear the weigh of a king’s ransom in Gold to it’s owner and claimant!  If in twenty years the scion grew into a tree suspiciously similar to a common Chinese horticultural staple, no problem  – it could be quietly poisoned one night and the resulting dried up skeleton presented as a relic in its own right.

Proof… in those days, in Japan, things of Indian or Chinese origin was extremely rare and material artifacts were regarded as veritable “proof” of the truth of a story or tall tale.  When a monk says he sat under he Bodhi tree, and he actually showed us one of its leaves, he must be telling the truth – there is the proof, real, solid, substantial and unquestionable.  Who would dare to question the word of a renowned world-traveling monk?  Remember, there were no convenient cell-phone cameras in those days. Oh, and “Monks don’t lie.”

Likewise, material artifacts, shards of pottery allegedly belonging to he bowl of Ananda or of the Buddha himself could be passed off to the unsuspecting and gullible.  Even to this very day there are innumerable “genuine” relics of The Buddha’s teeth salvaged from his funeral pyre.  There are far more of such relics than he normal complement of thirty-two natural human teeth even counting the individual with occasional “extra” “wisdom teeth.”  In many cases the plethora of “Buddha teeth” do not even resemble human teeth.  Recently, in one such case Western experts were invited with great fanfare to examine the “relics” to verify their authenticity. One veterinary dental expert commented that it would not be necessary for him to travel to South East Asia to perform the “testing” as it was obvious from the proffered photograph that the “relic” was three times the size of a human tooth and bore the unmistakable characteristics of bovine origin!  That particular “relic” is housed in a special temple in a reliquary made of hundreds of pounds of gold, precious metals and jewels.  There are as many, if not more; “Buddha Relics” floating around Asia, as there were relics of “The True Cross” floating around Europe in the Dark Ages.

Regalia were likewise brought back from China, replete with stories of embellishment and empowerment.  This robe belonged to this, or that, famous saint, the mere possession of such a piece of cloth conferred some sort of mysterious powers to its owner or served as the recognized authentic “Dharma Seal” implying “True Transmission.” In the Eihei koroku, Dogen responds to his inquisitive brethren who were dying to see what magical artifice Dogen had brought back from China with him.  When asked, Dogen, simply replied, “I came back with only a little bit of gentleheartedness” (indicating that he had returned completely empty handed.) What Dogen brought back was his experience in the training of the awakened state of mind in China – it was but, a gentle heart –– an empty hand.  Neither one accompanied with an iota of “proof.” Here in the West, there is an expression, “The proof is in the pudding.” This phrase allegedly was coined in the seventeenth century and connoted the concept that the value of something is not in what is written or told about it but in its actual use.  In the case of our “pudding” all the glowing words of praise heaped upon one’s ability to make the finest pudding in the kingdom come down to the simple question; “How does it taste?”

In Dogen’s case, “What sort of person is produced by the training?”  All the credentials, seals, certificates and authorizations in the world cannot make a saint of a liar, or a holy man out of an arrogant philanderer who carefully builds himself up with self-created mythology based on lies and deception. A lying thief and braggart who dresses as a king in garments costing thousands is still a lying thief, whether dressed in an exquisitely tailored Italian business suit or the finest Japanese ceremonial brocade.

It can be said that a “good student can learn from even a bad teacher” this may be true in some cases but by and large it is a waste of time and resources. Bad teachers need to be identified, exposed and relegated to the dustbin of their own wishful created mythology.  When a self-proclaimed “great teacher” returns from his allegedly “beloved” teacher’s funeral after being seated in the back with the lower monks, is given a pee-stained kimono instead of the kesa he formerly requested, – then there is something wrong.

They still laugh about that one….  When such a teacher leaves a trail of endlessly repeated accusations of sexual miss-conduct stretching for over forty years, something is very wrong, people have been unnecessarily and selfishly hurt and The Dharma besmirched.

“The proof is in the pudding”; in cases such as this, the “pudding” is bitter and poisonous.