Raleigh, NC (USA) -- Led by the hollow beat of a drum, people knelt on cushions the size of throw pillows Sunday morning, chanting a rhythmic prayer in Vietnamese to welcome the spirits of the dead. 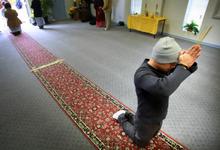 At Pho Da Temple, a tiny, red-roofed Buddhist prayer hall in Raleigh, nearly 50 people came to make offerings to their ancestors and to kindle a year of good luck.

Nha Huynh takes a moment to pray after a formal service celebrating the Vietnamese New Year at Pho Da Temple, a Buddhist temple in Raleigh, Sunday morning. TOP: Worshippers at Pho Da Temple pay their respects to spirits of former monks and their ancestors.

The Vietnamese New Year, Tet Nguyen Dan, marks the beginning of the lunar calendar and was celebrated this weekend by Memphis' estimated 6,000 Vietnamese.

The lunar new year, which officially starts today, is also observed by Chinese and Koreans.

"It's the most happy time," said Chuong Nguyen, the 36-year-old president of the local Viet-American Buddhist Association.

Even those who aren't happy, he said, slap on a Buddha-sized smile when Tet rolls around.

Vietnamese believe the first week of the new year will determine their fortunes or misfortunes for the rest of the year, he said.

"It's a new beginning," said Thi Nguyen, who is no relation to Chuong (Nguyen is among the most common surnames in Vietnam).

The 31-year-old native Memphian sat on a cushion not far from shrines of deceased relatives, surrounded by smoldering sticks of incense, sweets and citrus fruits the size of softballs.

Tet, the largest celebration of the year at the temple, is observed with a mixture of customs that bring to mind New Year's Day, Thanksgiving and Christmas.

For children, lucky red envelopes stuffed with money are handed out.

Ancestors are honored with prayers and offerings.

And the sins of the last year are wiped away, while the temple abbot reads individual fortunes off paper that hangs at the center of the temple on a tree of yellow blooms.

Across Memphis, the new year was celebrated in a variety of ways by the area's Asian population.

"My uncle is a Baptist. He doesn't do it like we do over here," laughed the Buddhist Association president.

The lucky colors, red and yellow, appeared in various forms in the temple, from grapefruits to roses.

Much of the celebration that went late into the night -- with a break for a vegetarian lunch -- revolved around generating a year of happiness, prosperity and long life.

Luong Nguyen, 72, a native of Vietnam, says he's already found all three since coming to America and Memphis.

A longtime soldier in the South Vietnamese Army, he spent eight years in a communist prison.

Nguyen immigrated to the United States under then Humanitarian Operation Program in 1990.

He compares the harsh treatment he underwent in prison to a German concentration camp.

"I'm very thankful for America," he said, in a thick Vietnamese accent. "This is my country now."