Pretoria, South Africa -- The Buddhist Retreat Centre at Ixopo is synonymous with its founder, Louis van Loon, who arrived in South Africa from Amsterdam as a 20-year-old in 1956 with one suitcase full of old clothes and another filled with art materials. He wasn’t sure whether he was going to pursue a career in civil engineering, in which he had just qualified, or try his luck at being an artist. Either way, he was seeking adventure in a faraway country. 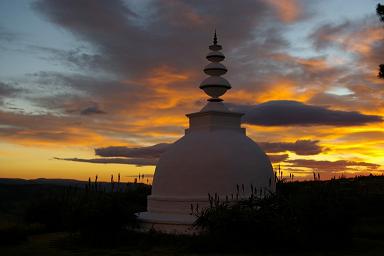 One of his many interests was Buddhist philosophy, which was beginning to have an impact internationally on young people - though not so much in South Africa, which at that time was isolated from - and ostracised by - the rest of the world by its apartheid policies.

But as a Dutch citizen, Van Loon could travel freely overseas to pursue his Buddhist studies, visiting monasteries and meditation centres in the Far East, Europe, the UK and the US.

He was in India in 1959 when the Dalai Lama and thousands of Tibetans arrived from Tibet, fleeing Chinese occupation and persecution.

What impressed him, and planted a desire to understand Buddhist philosophy better, was the way those Tibetans were coping with expulsion from their own country.

They seemed to possess an indestructible joy of living, no matter how miserable their lot.

“Simply to be alive, conscious, in that incredible universe in which we live was enough to keep them marvelling at the twists and turns life takes,” he recalls.

“They withheld judgement of the things that were happening to them. They were just present in them, making them workable.”

That calmness and clarity, balance and compassion in the most challenging circumstances struck him as the hallmark of Buddhist practice.

He believes it is those qualities that have been attracting increasing numbers of Westerners to Buddhism - particularly the practice of “mindfulness” that is so intrinsic to this 25-centuries-old philosophical tradition.

Van Loon’s interest in Buddhism deepened so much that he decided to build a meditation retreat centre and to establish Buddhism as a subject of academic study.

Buddhism was not yet taught at South African universities. But Van Loon’s published Buddhist studies attracted invitations to lecture in Buddhist philosophy at the Universities of Durban-Westville and Cape Town, eventually leading to Buddhism becoming an established academic subject at most major universities.

In 1970 he bought a 120ha farm in Ixopo, to the surprise of the locals who considered the land useless as it was eroded, very hilly and overgrown with wattle trees.

Yet it was ideal for his purpose, even if it needed a lot of hard work.

While running a busy professional practice as an architect and consulting engineer, lecturing at two universities and still travelling extensively, he started to reclaim the land and erect the buildings that now constitute the Ixopo Buddhist Retreat Centre.

But it was one thing to have buildings, quite another to attract people to stay in them. Where to start?

“It didn’t help that in apartheid South Africa, Buddhism was suspected to be associated with communism,” Van Loon recalls. “After all, the Chinese were communist as well as Buddhist.

“In addition, wasn’t that upstart (the liberal) Alan Paton associated with Ixopo? And here was a ‘meditation centre’ starting up in those same Ixopo hills that Paton in his book Cry the Beloved Country described as ‘beautiful beyond any singing of it’. Hmm…”

The Buddhist Retreat Centre was finally ready to open its doors for the first time in April, 1980. Van Loon’s good friend, the late journalist Monica Fairall, wrote an article about the imminent opening in the Sunday Tribune, which mentioned that the first retreat to be held at the centre would be about Zen Buddhism. Somehow “Zen” elicited more of a response from people than “Buddhism”. Zen was sexier. It still is.

Not knowing what to expect, a karate teacher who vaguely recalled that historically the martial arts of Japan had included an element of Zen, read the article and persuaded 18 of his pupils to go to that first retreat and learn more.

But this was a flash in the pan. For months afterwards, the centre considered itself lucky if two or three people turned up once or twice a month. Most, like the karate group, expected something other than what they got.

But gradually, in line with the burgeoning interest in Buddhism worldwide and the gradual opening up of South Africa to the world, the retreat centre flourished.

Retreats are now held on a wide variety of subjects every weekend, or even for as long as nine days.

People come to the centre for many different reasons and there are various retreat options available to fulfil their needs.

Traditional meditation retreats conducted by eminent international scholars fill the centre to capacity with 40 or more visitors from all over South Africa and, increasingly, from overseas.

The primary focus of the centre is to study Buddhist philosophy and meditation, whether as a novice or a seasoned Buddhist.

“There are so many ways to hone one’s mind to pay caring attention to whatever happens to be in front of one,” Van Loon explains. However, you may also stay at the centre without participating in a formal retreat, just reading in the excellent library, listening to recorded talks, walking on the estate, watching birds, meditating or doing nothing.

The Buddhist Retreat Centre is now considered to be one of the finest in the world. And it is exceptionally - but not accidentally - beautiful.

“Buddhism stresses the interdependence of all things - experiencing ourselves as ubuntu: unique as individuals, yet woven into an infinite web of self-organising relationships,” Van Loon explains.

“This expresses itself in an unusually keen sense of kinship with our natural environment and with all the beings and creatures that live out life’s dramas there.

“Mindless, heartless exploitation, overgrazing and neglect had turned those lovely hills in Ixopo into a virtual desert – eroded, bird-less, treeless.

“Yet, with some gentle Buddhist persuasion and patient nudging, nature was prepared to come back to it to such an extent that within 20 years, former president Nelson Mandela saw fit to award the centre natural heritage status.”

There are now otters in the dam, buck grazing in the valleys, rare orchids, tree ferns, cycads, wild flowers and yellowwoods and stink woods covering the hills, and 160 species of birds, including the endangered blue swallow.

“Man and nature are in partnership once again. Ubuntu. These hills are lovely again – beyond any singing of it.”

Integrated into the serene landscape are the centre’s buildings; bedrooms and cottages, a dining room, office, shop, a lecture and art studio, a library and the meditation hall.

Outside there are raked Zen sand gardens, a traditional stupa (pagoda), a labyrinth, a meditation forest and the largest handmade Buddha statue outside the Buddhist East.

Its first cookbook, the best-seller Quiet Food: a Recipe for Sanity is now in its fifth printing. A new recipe book has just gone on sale, called The Cake the Buddha Ate. The centre also gives cookery demonstrations and workshops where the emphasis is on living - and eating - holistically, in harmony with the seasons and the environment.

As with everything else you do at the centre, the idea is also to eat mindfully.