Buddhist monk returns to life after four years in retreat

Gelong Thubten, who has just come back to the modern world after four years in retreat 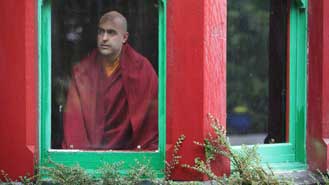 “It was a bit like Big Brother without the cameras,” said Gelong Thubten. “What did I miss? I missed my Mum and ice cream.”

What he found to replace them, it seems, was a profound inner happiness and an almost tangible aura of stillness and calm.

In June 2005 Gelong Thubten, 37, from the Home Counties, was voluntarily incarcerated in a remote part of Scotland, cut off from radio, television and telephone communication. Apart from letters once a month, he and his 14 fellow monks were divorced from the outside world.

He has spent the time following an intense and disciplined schedule of meditation and prayer, shutting out the material world and focusing on the inner mind. For 19 hours a day, seven days a week, he has been practising life inside his own head. During five months of the second year, the monks observed a vow of silence.

Gelong Thubten grew up in a middle-class family in Cambridge and Hampstead. He is the son of the Indian actress Indira Joshi, who was in The Kumars at No 42. He went to University College School, North London, and the University of Oxford, then to drama school in New York to become an actor.

When he was 21, and shortly after auditioning for the role in the film Little Buddha — “wonderful coincidence, isn’t it?” — the fast life and stress of acting got too much for him and he decided to take 12 months out to study Buddhism.

That was 16 years ago. He is now a senior monk, living by five simple precepts: do not kill or harm a living being; do not steal, tell lies, engage in sexual activity or take intoxicants.

Gelong Thubten is open about the difficulties that he faced on the retreat, which was in a converted farmstead. The satellite of the Samye Ling Monastery in Dumfriesshire is the first Tibetan Buddhist Centre established in the West.

“The first year dragged so much. Me and one of the other monks, we would meet over lunch and joke, 1,099 days to go, and the next day we’d say, 1,098 to go. It really seemed a drag. But in the second year you lose yourself in it, you become very focused. Then, towards the end, when it starts revving up, and you know you are out in a year, you start to get impatient again.

“I’m reluctant to compare it to a prison sentence. You can walk out any time. There’s no stigma. One or two people did leave and we do not judge them. I have friends who dropped out and I understand — it’s so hard.”

The monks had a calendar for their rota and used this to gauge the passage of time. They celebrated Christmas not with turkey — they are vegetarian — but with crackers. Occasionally the caretaker would bring them a treat such as Marmite.

He spent most of his time in his small, austere room, containing a shrine, a meditation box and a trunk for his meagre personal possessions of robes and socks. He had no books or any kind of luxury.

“It’s hard work, like physically building something — building your own inner strength. It’s quite practical. I found it exhausting in an exhilarating sort of way.”

He is now organising further retreats and plans to return to the work he did beforehand: counselling businesses, NHS workers, prisoners, drug addicts and schoolchildren about stress management.

“I lived the actor life. I was burnt out at 21. That’s given me a lot of ability to relate to people when I’m teaching them. When I go into schools I tell them, yes, I was an actor, I have had my heart broken and been drunk and taken drugs. I’m not removed from that into some weird spiritual world.”

After a period of adjustment at the Samye Ling centre, he travels to Brussels next week to start teaching. After so much solitude, he is not looking forward to the flight or the crowds, but a friend is giving him a laptop and he is happy to read novels again. “I missed the last two Harry Potters,” he said. “I’m dying to get into them.”

• Buddhism is one of the world’s most tolerant and logical faiths, marked out by its non-violence and lack of dogma

• There is no worship of a God, Individuals seek their own path to enlightenment, or Buddha-hood

• Buddhists do not believe in a pre-ordained fate, everyone is offered the possibility of change

• Buddhism is essentially positive: it regards people as naturally good There are three main aspects to Buddhist practice: doing no harm; wholesome actions; and training the mind through meditation

Day in the life

7am-8.30am Breakfast. Monks use this time to have a nap, walk or do some chores

11.45am-1.30pm Lunch. Food is vegetarian and plain. Sometimes the monk on cooking duty would make a birthday cake for someone

6.30pm-7.30pm Evening meal. Once a month the monks would receive letters from home

7.30pm-9.45pm Meditation in own room. No books or novels are allowed other than Buddhist texts

11pm Bedtime. The monks sleep upright in a meditation position in their prayer box, or lie on a blanket