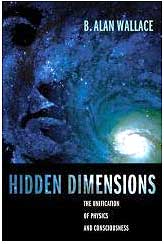 This book goes where angels fear to tread and as such will be dismissed out- of-hand by many traditionally orientated scientists but embraced whole heartedly by those who can plainly see that science has failed to provide any real insight into the true nature of human consciousness.

Hidden Dimensions is well researched and exceptionally well referenced, and considering the degree of difficulty in understanding certain aspects of quantum physics and esoteric Buddhism, it is highly readable. A familiarity with basic Buddhist philosophy will be a considerable help in understanding Wallace’s rather revolutionary, though not unique thesis towards the unification of physics and consciousness.

This book will stretch most readers a little, perhaps requiring additional reading. This is not a criticism by any means and the rewards of increased knowledge and understanding in this very complex area will be well worth the effort. Readers should not feel daunted by not fully understanding quantum physics.

To paraphrase one famous physicist, "Anyone who claims to fully understand quantum physics is either a fool or a liar!" Similarly, many esoteric aspects of the Buddhist belief system are both counterintuitive and stretch the credibility of even the most open minded, intelligent reader.

In an attempt to provide a sound basis for the unification of physics and consciousness Wallace approaches the problem from three different angles. Firstly, he discusses quantum physics, its relationship with classical physics and science, then highlights its strengths and weaknesses.

Secondly, he discusses consciousness, largely from a Buddhist position, comparing this "way of knowing" with various other notions of the nature of consciousness – particularly the neurophysiological scientific model.

Thirdly, Wallace presents a challenging view of the approach and basic methodology characteristic of  modern science in how it attempts to study the phenomenon of consciousness. He concludes that it basically doesn’t have a clue how to do this and consequently has not achieved any credible account of its nature.

Wallace argues that science insists on seeking knowledge and facts from objective experimentation, where the observer is not factored into the process cannot in principle be used to successfully study consciousness. Subjective observation is essential but this requires highly trained specialists in mind/consciousness observation, just as science normally requires highly trained practitioners in its other investigations. Highly trained Buddhist practitioners, Wallace claims, are capable of this procedure and in fact, part of their training towards achieving enlightenment and a truly blissful and virtuous existence is involved in a kind of objective observation of subjective states.

I feel the book is a little too biased towards Buddhism, being more or less, a complete and totally appropriate system for the study of consciousness. Whilst I personally applaud and agree with the basic goals of Buddhism - to live a contented life of universal peace, without harming other living creatures or the environment, Buddhist doctrine is not without its conceptual problems. Specifically, literal reincarnation (backwardly possible from human to a dog for example, as believed  by Tibetan Buddhist lamas, one reason they treat dogs so well in the monasteries); the so called Law of Karma; and the possibility of "pure" consciousness free of any contamination of the meditators mind/brain system are parts of Buddhist doctrine which are challenging and open to dispute.

There are other systems which attempt to understand consciousness without the myopia of modern science and without the unnecessary doctrinal baggage of Buddhism. The cosmological resonance (kan-ying) of Chinese Taoism; process philosophy (à la A. N. Whitehead); and the transcendental methods of Advaita Vedanta are a few examples.

One aspect of Buddhist doctrine which Wallace applauds enthusiastically is the ethical way of life or virtuousness. However wonderful this may be, it is in my opinion, irrelevant to High-Energy Consciousness Research. The problem of human virtuousness has never been satisfactorily and universally answered. Aristotle, Kant, MacIntyre, Plato et al. have attempted to do this, and just as good a case can be made for existing as a fully conscious evil entity as a virtuous one.

As the old Zen saying goes, "the wind blows with no enmity" - it is part of nature, we are part of nature, we observe the wind destroy life and property as in a cyclone - morals, duty and virtuousness are manmade, cultural constructs that should not come into the study of consciousness itself. Wallace states contrary to this, "For all meditative research, a wholesome way of life, based on ethical discipline, is of paramount importance". "The essence of ethical discipline is twofold: avoiding any behaviour of body, speech, and mind that is injurious to oneself or others, and devoting oneself to conduct that serves the well-being of oneself and others" (p. 60).

This in not a trivial criticism, because as Wallace mentions (pp. 102-103) Buddhist doctrine suggests that high-level practitioners can actually change reality with their thoughts, this is further supported by some quantum physicists. If this is the case then either evil or virtuous thoughts could change reality with equal efficacy. I found this section of the book (Chapter 6) both irritating and irrelevant to Wallace’s thesis and simply an uncritical repetition of Buddhist doctrine, which compromises the credibility of an otherwise important book.

This criticism aside, I recommend Hidden Dimensions to all interested in the most illusive of phenomena, human consciousness and its relationship with the rest of the universe. This book together with others just starting to appear, such as; Neither Brain nor Ghost by W. Teed Rockwell and Radical Nature by Christian de Quincy are becoming the basic reference material for the next step in transcending the inappropriate methods of modern science and its myth of "objectivity" so we may discover our true place in the universe.

---------------
Rob Harle is an artist and writer, especially concerned with the nature of consciousness and high-body technologies. His current work explores the nature of the transition from human to posthuman, a phenomenon he calls the technoMetamorphosis of humanity. He has academic training in philosophy of mind, comparative religious studies, art and psychotherapy. Rob is an active member of the Leonardo Review Panel. For full biography and examples of art and writing work please visit his web site: http://www.robharle.com