The Soaring Rhythm of Unshakeable Faith 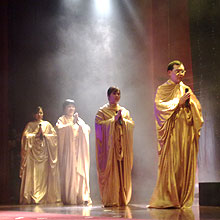 << Style gone MOD at the “Sound of Compassion” concert

If anyone were to tell you that a mere musical concert had the power to tear asunder the placidity of boredom, and raise your faith into heavens like an unfettered eagle soaring into open sky, would you believe it?

What if – what if that concert was delivered by a multitude of young joyous people, whose unfettered open-heartedness carried the message of an ancient sage with such pure intent that the end result was to be a piercing experience of unbridled altruism?

But how enlightening can a concert be?

And yet, that was what the “Sound of Compassion” concert, organized in conjunction with “Haiti Disaster Relief Fund” delivered. The incessant swirl of light, sound and motion could not mask the deep meandering rhythm of the Dharma coursing through the HGH hall in Sentul, Kuala Lumpur, like an alluring angel constantly sprinkling star dusts all around.

If there was any meaning to “Dharma inspired music”, this was it. At long last, one could meaningfully say that the night truly witnessed the maturing of the Malaysian Buddhist performing arts community.

Like a flighty koan, the “Sound of Compassion” concert mocked its audience like a wise old monk beckoning everyone inside it to unlock its message. Forget that sweet vocalist. Did you hear her call for selflessness? What is the sound of a wordless moving arm? Listen to the whisper of compassion from those prancing figures dancing out of a Dunhuang grotto. What do you hear?

If there was anything that separated this event from any other previous concerts was how creative the performers’ costumes were. The visual intensity was immense, as was the appropriateness for each of the performances. For once, style was in. "What is the sound of a wordless moving arm?" Dance troupe from Tzu Chi  >>

I.gemz’s all black attire was as stylish as it was cutting, complimenting the group’s forte in modern, “Protestant” inspired pop genre. In fact, like old ginger, its maturing produced a deeper, enriched version of “Brahma of my heart”, a much loved hymn which is a favourite of the current generation. (http://www.invibes.net/brahma-of-my-heart/)

And then there was the golden hued, majestically cascading roman togas adorned by the Messengers of Dharma (MOD). There was regal in their entrance, which lends itself the royal privilege to introduce the voice of the late Chief Venerable K. Sri Dhammananda. Tears welled in many eyes as the surreal voice of that beloved monk told the story of Dona, a song about a brahmin who was eager to know who the Buddha really was.

Dua Space Dance Theatre rendition of “Fe Tian (Dunhuang)” was as exhilarating as it was scintillating. Since becoming the first Malaysian Chinese dance group to go fully professional, its adoption of contemporary technique and Chinese dance created a unique fusion of modern and tradition, merging the spiritual and the material. This was a prime example of how a professional outfit successfully drew inspiration by blending and immersing itself into cultural and religious values.

From the soaring flights of Dunhuang, came the graceful, silent elegance of “wordless Dharma propagation”. Founded by Tzu Chi, this all-ladies troupe delivers Dharma inspired dances using sign language. Indeed, what is the sound of a wordless moving arm?

And while long time favourites like i.Gemz, D2Y and MOD somewhat cemented the raison d'être of local Buddhist hymns, the next presentation starkly demonstrated the raw power of what potentially could be the rhythm of a new generation of Buddhist music. Part gospel, part new age and rock-pop fusion, the rummaging beat of the Dandelion’s drummers droved the audience to near ecstasy. 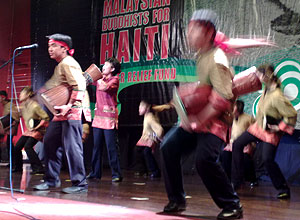 They incessantly pounded mini ashiko drums, producing pressing, energetic gallop as though invoking the gods to rally its earthly mortals to wake up and walk the noble path. If ever there was any motivation to let the sound of Dharma drive one’s hallowed lives, Dandelion’s wonderfully creative forces would surely be its new musical face.

And so while the beating drums of Dandelion’s lifted and cajoled half-awakened souls to seek their own full awakening, they were others who sought in their own ways to deliver Buddha’s message of Enlightenment.

The Dhammaduta Development Youth Choir (D2Y) paid homage to the king of pop Michael Jackson, and implored us to look at the “Man in the mirror”. What do we see? Will “Tomorrow be a better day?” as the choir suggests in their second song (sung in Chinese)?

And when One Voice, One Melody, the budding outfits from the Buddhist Institute Sunday Dhamma School and Bodhi Group as well as solo performances by a Fo Guong Shan singer and Winnie Ho completed their respective presentations, it was clear the status quo of Malaysian Buddhist singers – both amateurs and professionals – have broken new grounds.

They no longer just sing Buddhist songs dressed in plain T-Shirts and jeans, but they have learnt to master powerful tools to augment Dharma outreach, which is music and style.

As the final line in the koan suggests, all these seem meaningless. What has bougainvilleas to do cicadas and coffee? And yet, in some strange way, they are inter-linked. Looking at the form, they may be meaningless. But if we go beyond what we see and hear and taste, we just “see, hear and taste”.

Monks and nuns of great wisdom call this living in the moment. Others call it ordinary magic, the magic of plain mindfulness.

Likewise, as we soak in the wonderful displays by an obvious group of very talented young Buddhists, we need to see beyond talent and youth. These are seeds of potent Dharma propagators.

Through music, they don’t just bring Dharma to their listeners. More importantly, they create unique opportunities where energy and creativity mingle to produce a whole new environment that avails itself only in group synergy.

This new environment portends a great future for this coming generation. It is one that has vitality, hugely self confident individuals that possess a sense of purpose and belonging. Nurtured carefully, they bring unshakeable faith (saddha), a primary first step that fosters a solid, Dharma based foundation.

The power of music, like any tool, if used effectively can never be underestimated. And with the demonstrations aptly delivered by these talents at the “Sound of Compassion” concert, the country’s young Buddhists prove that there is much to look forward to.

For Malaysia, it seems, the “theras” (elders) can now breathe easy. Buddha Dharma has finally broken out of temple walls and is now spreading itself into all corners of the country.

With unshakeable faith – and music, and style - that has finally happened.