Can Buddhists Seek Revenge? ('Out Of The Furnace' Of Hate)

[With] filial piety [to] fathers, mothers,
teachers, monastics [and the] Triple Gem,
filial piety [is the] teaching [of the] ultimate path [to Buddhahood],
[with] filiality named as ‘precept[s]‘,
also named ‘restraint [and] cessation’ [from harm]. 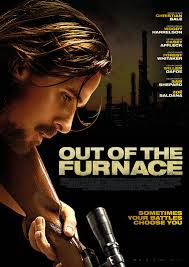 The film’s tagline says, ‘Sometimes your battles choose you.’ What unusual is that this is no typical revenge flick featuring gleeful violence. In fact, it was with a certain sense of unhappiness and reluctance that the elder brother shot the gangster… first in a leg such that he cannot flee far, next in his side to cause him pain, and finally in his head. With some delay between each shot, he seemed to be ‘calmly’, instead of sadistically, waiting for signs of remorse, which were never expressed.

Like what all good films do, while they tell credible stories, they also spur you to contemplate, on what you would do in the unfortunate positions of the protagonists. Is there any form of revenge, from the mildest to the wildest, that can be justified? Caught in a scenario like the elder brother’s, it is easy to empathise with his compulsions for taking the law into his own hands, to the extent of breaking the law. However, is it really alright to pay back hatred with hatred, to become a reflection or a more terrifying version of the hateful in order to retaliate the hateful? What do the Buddha’s teachings say on the issue of vengeance? Is it ever justifiable, even in extreme situations?

According to the Brahma Net Sutra’s (梵网经) ‘Twenty-First [Bodhisattva] Precept Against Angrily Fighting For Revenge: If [as] Buddhas’ [Bodhisattva] disciples, [they] should not, with anger requite [others'] anger, with fighting requite [others'] fighting. If killed are [their] fathers, mothers, brothers and six relations [relatives, e.g. fathers, mothers, elder brothers, younger brothers, wives, children etc.], [they] should not seek revenge. If the monarch [leader] of a country by others is killed, likewise should [they] not seek revenge. Killing lives to avenge lives, [this does] not accord with filial piety.

[They should] not even, [of] domestic animals and servants, beat, scold or humiliate [them], day by day giving rise to the three [evil] karmas [of body, speech and mind, with] misgivings [of] speech [that are] immeasurable, moreover, to intentionally create misgivings of the seven [forms of] rebelliousness [i.e. patricide, matricide, killing an Arhat, causing a Buddha to bleed, destroying harmony of the Sangha, killing one’s preceptor, killing one’s Acarya (Dharma teacher)]. Moreover, [if] Bodhisattvas who have left the household life [monastics], without the heart of loving-kindness seek revenge, and even [if for the] six relations, intentionally [seek] revenge, [they] commit a light defiled misgiving.’ ‘第二十一瞋打报雠戒: 若佛子，不得以瞋报瞋，以打报打。若杀父母、兄弟、六亲，不得加报。若国主为他人杀者，亦不得加报。杀生报生，不顺孝道。尚不畜奴婢，打拍骂辱，日日起三业，口罪无量，况故作七逆之罪？而出家菩萨，无慈心报雠，乃至六亲中故报者，犯轻垢罪.’)

It should be noted that the main focus of this secondary precept is against revenge in general, that falls short of killing, which is why breaking it constitutes a lighter misgiving. If revenge leads to killing, it would break the first major precept. Surprising as it might be, even when the harmed is the beloved of one, or even of many, we are discouraged from seeking revenge. As two wrongs do not make a right, the righting of wrongs should not be done with the doing of more wrongs. The full and essential spirit of all Buddhist precepts is that of filiality to all sentient beings, to avoid harming anyone and to help everyone instead, as we have all been reborn so many times in so many inter-relationships that we are really family members indebted to one another. Even a so-called enemy is but a forgotten family member gone astray, who needs more spiritual guidance. It is by guiding one another to the ultimate goal of Buddhahood that makes it attainable too.

‘Righteous vengeance (or anger)’ is delusional as once there is hateful revenge as motivation, it is already not right. What could the elder brother had done to facilitate justice instead? Having already ‘disabled’ the gangster to prevent escape, and with arrival of the police, there was no need to kill at all. He could had simply let the law of the land take over. It is easy to let rage take charge, while the challenge of spiritual practice is to always look for more skilful means to address problems at hand, to be firm when needed, yet compassionate, without being angry or cruel. Only in rare cases, when a life has to be taken to prevent the harm of many more should the intention of killing even cross the mind, as the absolute last resort. May we remember this improved tagline – ‘At all times, we choose our battles.’