"Three Times" Too Many?

Singapore -- The movie "Three Times" (winner of 2005 Golden Horse Awards for Best Film, Filmmaker and Actress) keeps you guessing from beginning to end, as to what the director is trying to say. It is the kind of movie that you tend to either love, hate or don't know to love or hate. (What am I saying? Did I not just list all the possibilities?) 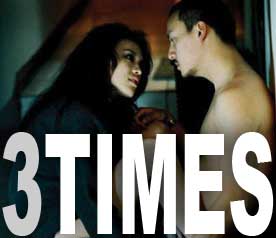 It tells three accounts of two lovers' interactions. Both of them appear in three consecutive but jumbled periods of times. Each chapter is suspended, in the sense that there is no clear linking to each other, and no hint that they knew each other previously.

Each chapter is also suspended in the sense that it seems to start in the middle of nowhere and has no clear conclusion. Not all three stories have happy "endings". Actually, the main actor and actress in each instalment might simply be a couple who happen to look the other two couples in the other two periods of times. Yet if there is a Buddhistically instinctive common thread through the three sub-stories to form an overall story, it has to be a tale about rebirth and forgotten past lives and lessons.

In Buddhism, the past, present and future are called the "three periods of time". If "Three Times" is about rebirth, it seems to say that there can be both progression and regression from life to life, be it in relationships or anything else. Sometimes, things don't really head anywhere in particular. There is dreariness in how the movie is paced in a frequently "aimless" yet unpretentious reality TV style, which is almost painful, as you try to discern its real message, awaiting for some enlightening insights to hit you, which does not readily appear without reflection. (At least, this is so for me.) This is like real life!

It is a story about yearning for freedom and love, coming together and separating, and about how it does not seem to lead anywhere substantial, as we fall in and out of worldly love in “pointless” cycles. What stands out in the film is not what's there, but what's not there - there is no element of spirituality in the whole story.

The Chinese title of the film means "The Best of Times" - which seems satirical or tragic? To me, it is a horror movie in a most subtle sense. It makes me dread being reborn with no increased spirituality. Thank goodness it is possible to have spiritually upward-spiralling relationships, be it love, kinship, friendship or mentorship.