Singapore -- Audiences yearning for a brilliant twist in M. Night Shyamalan's latest thriller might not be too thrilled to know that the ingenious twist to their expectations is that there is none. 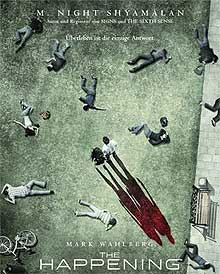 While it is understandable why many might see this as one of the director's least appealing works, it is however his most urgent and thought-provoking one - for it provides social commentary on a spectrum of important global matters at hand.

For no apparent reason, humans "freeze" and kill themselves, while many honey bees disappear en masse mysteriously. The second seemingly "trivial" incident hints of a greater disaster to come, based on the theory that if bees all disappear from the surface of the earth, we would have no more than four years to live - due to the end of pollination and thus all vegetation for the food web.

This ecological note in the light of global warming is crucial indeed - as raised temperatures threaten to disrupt the botanical and biological cycles of flora and fauna. With all in one, and one in all, the world is an "Indra's net" of interdependence indeed, as discovered by the Buddha more than 2,500 years ago. Because no living being is insignificant, all should be respected equanimously. Disrespect of nature could lead to "unnatural" wraths of nature.

The enemies are probably unseen because mirrors are needed - because the enemies are also us - even if there might be other unidentified sources of danger out there. We are the terrorists - who terrorise the planet with pollution, deforestation, wars, disease... In selfish desperation, humans breed fear towards one another - to the extent of the "innocent" but hungry "terrorising" the suspicious for food, while the latter demonise them as enemies.

It is reiterated in the story by "experts" that if the happening was a natural disaster, certain acts of nature are such that they will never be fully comprehended. This seems to emphasise the limits of science - though it is science's task to push these limits - to outdo itself. A reminder to be awed by nature - even as one seeks to understand it. Plagued by the virus of delusion, as long as we are unenlightened, nature works in mysterious ways!

There was a scene where a woman views a video of an "infected" man feeding himself to a lion. She exclaims in shock - "What kind of terrorists are these?" This is ironic - for humans demand the breeding and slaughtering of animals in the billions. The self-reflective question would be - "What kind of terrorists are we?" With the increasing problems of over-population, the climate and food crisis, why are we not choosing a greener and kinder diet for the planet? (See diets' links to these crises at http://www.moonpointer.com/index.php?itemid=2265)

While new outbreaks of bird flu spring up now and then, WHO had already warned of a bird flu pandemic that could strike and kill millions of humans - and of course, even much more birds. It is insensible that humans demand meat at such high risks out of greed. The happening also suggested that just as the red tide generated algae that killed much fish, nature too could suddenly evolve viruses that wipe out humans specifically.

Another scene shows a man with misplaced faith in his precious stash of hotdogs. They offer no salvation though - not for the animals who became the hotdogs, and not for the consumer. According to the UN's FAO report in 2006, up to 18% of greenhouse gases are generated by the meat industry - more than the gases created by all transport in the world. If so, increase in meat-eating is surely a one-way ticket to a hothouse hell on Earth.

Yet another scene shows a woman who has abandoned concern for the world praying to a silent God - before she gets "infected" and kills herself unwittingly. And the closing scene shows a young man exclaiming "My God!" when the happening "re-happens". It was ominously hinted that there would be no divine intervention. Humans will need to bear their own collective karma, which can have long hands that reach individuals just as the air does.

The film wasn't about a complex conspiracy theory on the end of the world. However, it does show how it can happen. The speculations on the cause of the happening together constitute a grave general warning of the multiple possibilities through which we can self-destruct. There is no definite answer as to what really happened. What is the moral of the story? We should just do whatever we can in our knowledge to prevent any ill happening from happening!