Mumbai, India -- Two women flank a man; one of them is playfully trying to pull a sash off the man’s waist. This scene, sculpted in the 1st century BC at the Kondane caves near Karjat, is among the architectural marvels you can find in Maharashtra’s collection of little-known Buddhist caves. 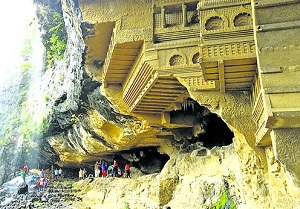 << This set of 16 Buddhist caves, excavated in the 1st century BC, are known for intricate sculptures on the façade, especially of common men and women. (Photo: Sandesh Lad)

These caves are called lenis, derived from lavanya, the Marathi word for beauty. “Their architecture is deeply influenced by the state’s climate. For instance, they have verandahs to keep out the torrential Sahyadri rains, which make them different from lenis found elsewhere in India,” says Yojana Bhagat, coordinator of the department of Pali, University of Mumbai.

In the monsoon, you can trek through lush greens and cascading waterfalls to explore the rock-cut caves, created between the 1st century BC and 6th century AD. “Back then, Maharashtra was an important juncture on the coastal trade route,” says Kamini Gogri, coordinator of the arts and aesthetics course at the University of Mumbai. “These exquisite structures were built to house Buddhist monks and serve as guest houses for traders.”

Made during the rule of the Satavahanas, Vakatakas and Kshatrapas dynasties, these caves, with sculptures and paintings of Buddha and scenes from everyday life, also house those of Hindu deities. “Most kings from these dynasties were followers of Hinduism,” says historian and filmmaker Benoy Behl. “These caves are one of our greatest heritage assets.”

The inscriptions found on these 14 caves date back to 250 BC to 3rd century AD. “The chaitya griha here or the monk’s rooms are the crowning glory of Indian Buddhist architecture,” says Behl. “Also, you find the first examples here of the popular motif of elephants holding up temples.”

“From the early phase of Buddhism, these caves have beautiful sculptures of Yakshas, and house a painting of Buddha,” says Bhagat.Getting there: Take the overnight train, bus or an hour-long flight to Aurangabad; from here, the caves are about 40 minutes away by road.

This set of 16 Buddhist caves, excavated in the 1st century BC, are known for intricate sculptures on the façade, especially of common men and women. These are indicative of a free, equal society, says Behl.

Aside from having interesting architecture, the caves are hidden under a grand waterfall, and you could get the chance to spot unusual birds here, and sometimes, deer stroll by too.

“It’s an easy, hour-long trek to the caves, one that even kids can take,” says Sandesh Lal, 36, an eco-tourism professional.

Getting there: Drive or take a train to Karjat station, and then drive about 30 minutes to Kondivadi village, the start point of the trek.

These 29 rock-cut caves are situated on the river Kotjai, in Dapoli. Nestled inside a forest, these are a combination of Hindu and Buddhist caves, believed to be 1,000 years old. Kotjai river is also home to some crocodiles. “It is the only leni from Vajrayana, the last sect of Buddhism. The stupas are placed outside, rather than inside, which is very rare,” says Bhagat.

Getting there: The caves are 25 km from Dapoli, towards Dabhol. It should take about five hours by road from Mumbai.

On a hill near Mahad-Konkan, across the Mumbai-Goa highway, this cluster of 30 Buddhist caves rest by the banks of Savitri-Gandhari rivers.

One of the most interesting carvings of the cave, excavated in 150AD to 300 AD, is of people giving donation to the monks. A sculpture shows a farmer handing over his farm to the group of monks who ran the place. “Moreover, these also have inscriptions in the rare Brahmi script,” says Bhagat.

Stone steps take you to the top of the hill, a 15-minute climb to the viharas. “In the monsoons, the hillock is wrapped in a green blanket, adorned with rivulets,” adds Saurabh Thakekar, 27, director of travel company Mumbai Travellers.

Getting there: Drive to Gandharpale village, which is on the NH17 or the Mumbai-Goa road, about six hours from Mumbai.