Discover the many faces of the Buddha at several well-preserved monasteries in this stark mountainous region.

Leh, Ladakh (India) -- As the plane descends three sights emerge simultaneously - a scattered township, the gurgling Indus river and snow-capped peaks. Leh, the capital of Ladakh, is now on the tourist map and a flight to this rooftop of the world takes less than an hour from Delhi. 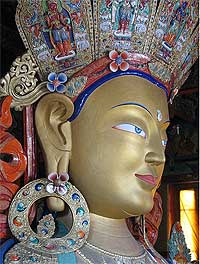 << The 15-metre statue of the Maitreya or Merciful Buddha is a popular attraction at Thiksey monastery.

With the outside temperature at nine degrees Celsius, breathing might not come easy at 12,000 ft above sea-level. It is not for nothing that locals call this the ‘land of the moon’ with fairy castle-like gompas (monasteries) perched precariously on rocky crags.

Monasteries are the main interest points in Leh, where people follow the Tibetan form of Buddhism. Ladakh, for centuries, has owed spiritual allegiance to Tibet and the Dalai Lama, who is considered a reincarnation of Lord Buddha. Thiksey, Shey, Sankar, Hemis, Lamayaru, Likir and Alchi are the best-known monasteries of the region and revered by locals as well as by tourists.

Thiksey, nearly 20 km from Leh, is a stunning monastery built on a stark hillock overlooking the lush Indus valley, with towering mountains as the backdrop. This is one of the most important monasteries for the Gelukpa (Yellow Hat) sect of Buddhists. The 12-storey gompa is believed to date back to the 15th century and even today the devout come to spin the prayer wheel and bow to the ‘enlightened one’ from all parts of the world.
Buddhist face of Ladakh

Another popular attraction is the 15-metre Buddha — the largest in the region. This clay statue painted in gold was created in 1970 to commemorate the Dalai Lama’s visit to Thiksey. The statue is also referred to as the Maitreya or the Merciful Buddha.

Buddha takes a different avatar in the Shey Monastery, five km from Thiksey. The Sakyamuni Buddha, 12-metre tall in a sitting pose, is made of copper sheets gilded with gold. The Sakya were people who lived in the foothills of the Himalayas, with their capital in Kapilvastu, which is now in Nepal. Buddha was the muni of the Sakya.

The monastery is located inside the Palace boundary that served as the summer residence of the kings of Ladakh. The walls on either side of the statue have paintings of the 16 arhats (disciples who achieved Nirvana) and the wall behind the statute has the two main lieutenants of Buddha — Sariputra and Maudgalyayana.

The Sakyamuni and Maitreya Buddhas also stand tall in the Sankar gompa on the outskirts of Leh. However, this monastery houses also has another big spiritual attraction — the golden statue of Avalokitesvara with 1,000 arms and 11 heads. Avalokitesvara is the compassionate bodhisattva who is believed to see the sufferings of the world with all his eyes and then acts with his 1,000 hands to alleviate misery. The current Dalai Lama is said to be the reincarnation of the Avalokitesvara.
Land of the moon

Lamayuru is one of the oldest monasteries in the region, about 125 km from Leh. Set in the stark mountain ranges appropriately called the Moon Land on the Leh-Srinagar highway, this quaint monastery is said to have been built on a lake that existed over a thousand years ago.

Lamayuru’s Red Hat Buddhism is widespread in the region and has spawned many smaller gompas where Lamas are sent to preach and teach. Twice a year, on full-moon nights, Lamayuru hosts a stunning mask dance by the Lamas. The masks are believed to be symbols of divinity guarding people against evil.

Founded in the 10th century by Buddhist philosopher-architect Rinchen Zangpo, the monastery pays obeisance to Lord Buddha and to Padma Sambhava, an eighth-century philosopher and translator of Buddhist texts who introduced Tantric Buddhism into Tibet. Padma Sambhava has a large following in this region as also in Sikkim, Bhutan and Tibet where he is popularly known as the Second Buddha.

The tall and stately Likir Monastery comes into view even from 5 km away. Here the gigantic image of the Sakyamuni Buddha sits guarding the stark barren mountains. Though Likir was originally built in the 11th century it got burnt down and was rebuilt in the 19th century. In Likir the Yellow Hat or the Gelukpa sect prevails, founded by a 14th century Buddhist-spiritualist, Tsongkhapa.

The monastery divides the Indus valley and the Nubra valley, which is the highest desert in the world and was once part of the famed Silk Route. The winding road to Likir affords breathtaking views of the monastery from different angles. Besides the 25-ft statue outside Likir, there are several clay images of Buddha inside the monastery. There is also a museum that exhibits stunning thankas (wall paintings), old religious texts and domestic costumes and implements.

Interestingly, a chorten (stupa) inside the monastery has the statue of the Amitabha Buddha, popularly known as the Buddha of Infinite Light. In Tantric Buddhism, he is a Dhyani Buddha or Buddha in the philosophic avatar. Likir oversees the Alchi monastery, which is situated across the Indus river and dates back to 1000 A.D.

It is considered to be among the oldest monasteries in the region. Like Lamayuru it was also built by Rinchen Zangpo and is a fine example of Tibetan architecture combining square spaces with flat roofs. Alchi has some of the most spectacular thankas and mandalas (structure of Buddhist cosmology), many of which however have been ravaged by time and are now being restored.

But despite the imprints of years, most of the monasteries are in fine shape owing to regular restoration works. Perched on stark, sun-baked mountains, they draw visitors in growing numbers.