The north-central plains of Sri Lanka, called the nation’s Cultural Triangle, is home to many UNESCO world heritage sites 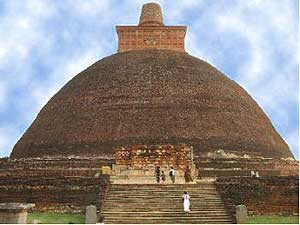 << Silent testimony to a civilisation: The stupa at Polonnaruwa

While Europe was still in the Dark Ages, the Lankan kings who ruled this land created innovative irrigation systems that made the landscape bloom — and then beautified it with magnificent royal palaces and places of worship.

Here, on the terrace of the Heritance Kandalama Hotel that overlooks a vast, man-made lake (man-made in the fifth century), I am seated with the setting sun turning the horizon into brilliant pastel shades of orange and pink in front of me.

On the rocks to my left, an old man is seated, the haunting music of his wooden flute weaving its magic as dusk falls and the smell of wood smoke fills the air. As I sip my glass of iced mango juice, I find myself reflecting on what a wonderful world I happen to be occupying at this moment.

I had spent that morning visiting Sigiriya, the fifth century rock fortress built by King Kasyapa. Having usurped the throne in 477 AD and condemned his father to death, Kasyapa lived in constant fear of his avenging brother — and so built himself a fortified palace (some might call it a fifth century penthouse) atop the massive Sigiriya Rock.

The ruins of his palace at the summit is reached by a path that takes you past moats, pleasure gardens and fountains as well as walls (actually the plaster covered face of the rock) on which are found some of the most beautiful and best preserved fresco paintings in Sri Lanka. Designated a UNESCO World Heritage Site in 1982, Sigiriya is a must-see for any visitor to this island.

A short drive from Kandalama is the ancient rock temple of Dambulla, another of the Cultural Triangle’s World Heritage Sites. The “temple” actually consists of five rock caves.

Three of these caves date back to the first century BC, two others having been added in the late 18th and early 20th centuries. The original temple was constructed by King Valagamba, who, having lost his kingdom to invaders from South India, took refuge in these caves for 15 years.

On regaining his throne, he established a Buddhist temple here, covering the cave walls and ceilings with paintings from the scriptures and filling the caves with innumerable statues of the Buddha — some carved in granite, others made of bricks and mortar and yet others of wood coated with plaster. Unlike the man-made cave temples of Ajanta and Ellora, these are natural caves which colourful wall paintings and votive statues have converted into places of contemplation and worship.

The Triangle includes two other ancient capitals, Anuradhapura and Polonnaruva, both UNESCO World Heritage sites. Anuradhapura was Sri Lanka’s first capital, being established around 500 BC, and has some unique places of Buddhist worship.

Early mornings, if you walk to the Sri Maha Bodhi — the magnificent sacred Bo tree, grown from a sapling of the very tree at Bodhgaya in Bihar under which the Buddha attained enlightenment — you will witness pilgrims at their devotions, much the same as their forefathers have been doing for the past two thousand years. 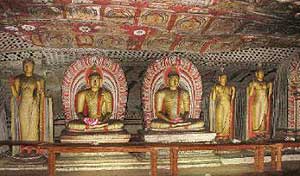 << Buddha statues and murals at the caves in Dambulla.

Polonnaruva was Sri Lanka’s capital from the 11th to the 14th centuries, and still boasts some of the world’s most impressive Buddhist stupas. One, the Gal Vihara, has four large statues carved from the rock face.

Visitors here cannot help but stand in awe of the sculptors who created these lifelike images, admiring in particular the statue of the Buddha’s disciple Ananda, a look of abject sadness on his face as he stands vigil over the dying Buddha.

Another stupa, Jetavanaramaya, rivals in size the largest of the Egyptian pyramids. Recently restored under the UNESCO Cultural Triangle project, it bears silent testimony to the civilisation that flourished in these plains while Europe was still in the Dark Ages.

The flautist has finished his performance and gets up to leave. I drain the last of my drink but decide to linger longer. In a short while I will have to get up and leave, but not yet.

Getting there: Sri Lankan Airlines, Indian Airlines and Jetwings fly regularly to the capital Colombo, a four hour drive from the Cultural Triangle.