A Humble Road to the Noble Truths in India and Nepal

Bodhgaya, India -- Heads shaved and clad in gray robes, they ate silently at their own small table near the kitchen. Then they vanished, only to reappear one-by-one in the upstairs shrine room, which we had entered earlier and where they took the meditation cushions closest to the three golden images of the Buddha, lighted by strings of electric lanterns overhead. We remained in the back. 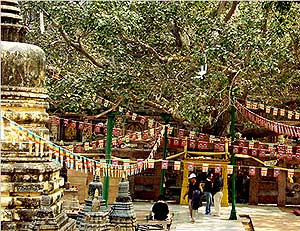 << The site of the tree where Siddhartha gained enlightenment.

When the head monk strode in, our worlds finally merged. As he beat time on a wooden instrument, we performed a Korean chant of the Heart Sutra, a traditional teaching on emptiness. Yet what filled the room was full and deep, the atonal harmonies of a Buddhist ensemble — at once jarring, beautiful and transportive.

This was just one of the many spiritual moments that marked our journey along the so-called Buddhist Circuit in southern Nepal and northern India. During eight days over New Year’s, my partner, Julia, and I traveled by bus, rickshaw and foot to the four original points of the pilgrimage route, places declared sacred by the Buddha himself: where he was born; where he was enlightened; where he gave his first sermon; and where he died.

Over the centuries, the itinerary, which has expanded to include other historical Buddhist sites, has drawn monarchs and monks, relic-hunters and curiosity seekers.

Some travelers take a more upscale route, riding on air-conditioned trains and luxury tour buses and staying at full-service hotels. But as Buddhists living on a Peace Corps budget, Julia and I opted for a more authentic experience. Our goal was to travel to the original four places as the Buddha might, making our own way, leaving room for serendipity, enduring minor hardships and seeking refuge in simple monasteries.

A seven-hour bus journey from Gorakhpur, an Indian city of 622,000 in Uttar Pradesh state, delivered us to our first stop in southern Nepal: Lumbini, Buddhism’s Bethlehem. The future Light of Asia was born in a stand of sal trees around 563 B.C., according to recent Western estimates, though there is considerable debate in the Buddhist world over historical dates.

Staggering off the bus some 2,600 years later, we walked through the gate to find a monastery construction zone: an ambitious plan to convert Lumbini, a Unesco World Heritage Site, into a Buddhist version of Epcot. Forty-two monasteries and meditation centers were planned; 12 are under construction.

The effort, 14 years behind schedule, has left clusters of unfinished cement buildings brooding over a landscape of untilled fields and a half-bricked pedestrian walkway. Only 14 of the planned monasteries are complete. Yet to our surprise, the complex offered a satisfying sampling of Buddhist diversity, ranging from the peaked layers of the white Royal Thai wat, or temple, to the orgiastic murals and kitsch lawn dioramas of the new Tibetan school’s Drikung Kagyu Temple.

The best moments, however, came when we retreated to the Korean monastery. Our donation of about $5 a night gave us a standard guesthouse room with a view of a huge unfinished pagoda temple in the courtyard. We slept on a futon over a cement platform and used a squat-style toilet; we were given a plastic bucket to fetch hot water.

But the ultimate luxury was monastic silence. Our minds quieted, we drifted off to sleep to calls of crickets and jackals. At 4 a.m., the monks provided a wake-up call by standing outside in the cold mist and chanting an invitation to an early-morning devotional.

Going back into India through Gorakhpur, we left Lumbini for Kushinagar, a scruffy town 100 miles east, where the Buddha died in 483 B.C.

We checked into the Japanese-Sri Lankan Buddhist Guesthouse, an empty and somewhat spooky building run by a single cheerful monk. Then we wandered over to the Mahaparinirvana temple, a 1956 shrine at a bend of the road leading out of town. The shrine contained one of the biggest attractions on the circuit: a 20-foot sandstone statue from the fifth century A.D. of the dying Buddha, lying vacant-faced on his right side.

Since it was discovered in a temple ruin in 1876, the iconic figure has drawn thousands of devotees, who leave offerings of fruit, flowers and candy. During our two-day visit, we saw members of a Chinese tour group tearfully touch their heads to the figure’s toes, long ago covered in layers of gold leaf. In one surreal scene, five Indian soldiers slowly circled the figure in their stocking feet, guns slung over their shoulders. Then there was Chimi, 38, who claimed to have done prostrations over the course of 600 miles of mountainous roads in his home country of Bhutan. We found him circling the shrine outside, performing the ritualistic full-body stretches, wearing knee pads and glides for his hands fashioned from roller skates and wooden blocks.

Affecting as they were, the devotional demonstrations did little to distract from Kushinagar’s dinginess. Peanut vendors, souvenir purveyors and mangy dogs lined the street in front of the shrine. There was even a satellite dish atop the local Tibetan temple.

“If you didn’t have television,” one resident monk explained, “it would be so boring.”

Eager to leave Kushinagar, we pined for Bodhgaya, 280 miles southeast in Bihar state. It was there under a pipal, a fig tree, that the 35-year-old ascetic Siddhartha meditated in about 528 B.C. until he attained enlightenment, the state beyond existential restlessness.

Our goal was to be sitting under the tree on New Year’s Eve. Since there were no direct buses or trains, we hired a private driver. Twenty-nine hours later — fog, a snapped suspension spring, a cracked wheel bearing and many wrong turns — we limped into Bodhgaya on Dec. 31, angry, tired and in no mood for epiphanies. After stowing our luggage in our room at the Karma Monastery, we stomped off to the tree.

What we found was something like New Year’s Eve at the Rose Bowl. As beggar children tugged at our arms for money, throngs of monks in their “school” colors paraded toward the temple grounds, where the tree is enshrined. There were Tibetans in maroon, Thais in mustard yellow, Sri Lankans in bright orange — many, oddly, wearing surgical masks against the air pollution.

Subsumed in the giddy crowd, we were carried through the entrance of the complex, also a Unesco World Heritage Site, which is dominated by an ancient 164-foot pyramid shrine called the Mahabodhi Mahavivihara. Turning left, we swept to the other side of the temple. Then, we saw it — the Bodhi Tree.

Mystical and familiar, it stood more than 50 feet, its branches thick with leaves and extending over an ancient balustrade, its larger limbs supported by painted steel poles. According to historians and Buddhist scholars, the tree is probably a fifth- or sixth-generation descendant grown from cuttings traced to the original, which was reportedly destroyed by the jealous wife of Ashoka, the ruler of much of the Indian subcontinent in the third century B.C. and widely believed to be Buddhism’s most famous convert.

Yet the power of the tree, even by inference, seemed palpable. Under streamers of colorful prayer flags tied to its branches, some people collected wind-blown leaves as sacred souvenirs. Mostly, they sat in meditation.

So did we. We had come halfway around the world for this moment. It didn’t disappoint.

After his enlightenment, the newly minted Buddha walked 160 miles west to a deer reserve outside Varanasi to deliver his famous teaching on the Four Noble Truths. Our passage to the spot, now known as Sarnath, came via second-class coach on Indian Railways, topped by a short ride in a tuk-tuk, a motorized three-wheeler.

Battling a letdown, I set low expectations for this final stop of the circuit tour. But Sarnath supplied a soft landing from the intensity of Bodhgaya, adding a surprising lightness to the trip. At the Indian Archaeological Service park, groups of smiling monks took pictures of one another while families picnicked on vast manicured lawns just feet from 2,300-year-old monastery ruins.

Across the street in the Archaeological Museum, tourists listened to guides explain how the artifacts of a religion now marginalized in its birthplace continue to cast a long cultural shadow. The most striking example of enduring Buddhist influence was the pillar King Ashoka planted in Sarnath — he left around 84,000 Buddhist pillars and stupas throughout his kingdom — depicting four snarling lions, standing back-to-back with veins popping from their legs, protecting the dharma, or Buddhist teachings. The lions are now the national emblem of India; the dharmachakra wheel on the capital base is the symbol in the middle of India’s flag.

But I spied a more interesting human tableau working its way around the Buddhist artifacts. A group of elderly Tibetans in musty clothes, clearly mistaking the galleries for a shrine, touched their heads to exhibition cases and rubbed their prayer beads over light panels and antiquities. One museum guard put up a mild protest, only to let them carry on. Sensing my amused stare, he smiled back. Then he clasped his hands in mock prayer.

Message understood: You have to admire the spirit of pilgrims.

FOLLOWING IN THE FOOTSTEPS OF THE BUDDHA: PILGRIM'S PREROGATIVES

It is best to travel the Buddhist Circuit in the cooler months from October through February. Most people start in Sarnath, India, near Varanasi. A recent online search showed one-stop flights from New York to New Delhi and then to Varanasi, starting at $1,220 (Jet Airways, Air India, Emirates and Continental). Or you can save by breaking the flights into separate legs. New York to New Delhi is $867 on a one-stop flight on Air France; New Delhi to Varanasi is $190 nonstop on Kingfisher Airlines or Jet Airways. Total: About $1,050.

Reservations are not necessary but suggested, especially in Bodhgaya, India, because the season is compressed, Buddhist groups have special gatherings, and monasteries often host large tour groups from their home countries. Bring your own toilet paper and towels.

In Kushinagar, India, the Japan-Sri Lanka Buddhist Center (Atago Asshin Kyokai World Buddhist Culture Association; Ramabar Road; 91-5564-2730-42 or 43 or 44; venassajikushinagar@yahoo.com) has rooms for a suggested donation of 300 Indian rupees a night (about $6 at 50.6 rupees to the dollar), including breakfast.

The Karma Temple, near the Great Buddha Statue, is run by the Kagyupa Vajrayana Buddhist Monastery in Bodhgaya (Temple Street; 91-9431-2808-12; ktcmbodhgaya@yahoo.com). The suggested donation of 350 rupees a night includes the use of a communal bathroom; meals are not included.

At the Myanmar Buddhist Temple-Dhammachakka Vihara (91-542-259-5199; dhammachakkavihara@yahoo.co.in) behind the archaeological park in Sarnath, rooms are available for an unspecified donation; meals are not included.

In Kushinagar, the Yama Cafe (91-995-611-2749), on Mahaparinirvana Path near the Chinese Temple, is a mandatory stop for ample dishes and a scrumptious thukpa, a Tibetan noodle soup; just don’t look in the kitchen.

In Bodhgaya, the Tibetan Market, near the Kalachakra Grounds, has Buddhist-themed food tents serving Tibetan dishes like momos (meat or vegetable dumplings) and other Tibetan specialties. American-style breakfasts are available at the Aahar Restaurant in the Embassy Hotel (Dumhan Road; 91-631-220-07711), opposite the Thai Temple.

Not into monastic-style traveling? One luxury tour is the Mahaparinirvana Express, an eight-day excursion on Indian Railways (www.irctc.co.in) that includes all four original circuit stops, plus other historic Buddhist places in northern India, before ending at the Taj Mahal. The tour, originating from New Delhi, includes air-conditioned sleeper cars, meals, hotels and English-speaking guides. Tickets range from about $665 a person for a three-tier sleeper to about $1,050 for first class.

Prices do not include airfare.