The temples and shrines of Kushinagar, in India, attract devout Buddhists and spiritual tourists

Kushinagar, India -- The tiny hamlet of Kushinagar in Uttar Pradesh, India’s largest state, is revered the world over as the place of Buddha’s Mahaparinirvana, his death and cremation, which marked his final liberation from the cycles of death and rebirth. 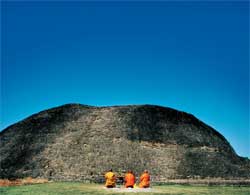 It is a holy destination, attracting devout Buddhists and spiritual tourists from all over the world.

During Buddha’s life, Kushinara, as it was then called, was a small town in the Kingdom of the Mallas, surrounded by dense forests, hidden away from the rest of the world. Kushinagar remained a secret until the late 19th century, when archaeologists rediscovered the site and began excavations.

Today, Kushinagar is going back to its roots as a must-visit destination for Buddhists. The town is home to many viharas, including a Tibetan gompa devoted to Sakyamuni, a Burmese vihara, and temples from Thailand, China and Japan.

Ramabhar Stupa is considered one of the most sacred shrines in Buddhism. Situated 1km from the centre of town, it is a must-see for every tourist headed to India.
It is said that this is the place where Buddha was cremated and achieved Mahaparinirvana.

Kushinagar is also home to the Nirvana Temple. This place evokes a host of emotions for Buddhists because this is the temple near which Gautam Buddha took his last breath.

It houses a six-metre long statue of a reclining Lord Buddha, which shows eight facial expressions when you look at it from different positions.
It is believed the statue represents the very last moments of Buddha before he attained Mahaparinirvana.

The Mathakaut Temple is another renowned shrine and houses a three-metre tall statue of Buddha. The deep blue coloured statue was carved out of stones from the hills that surround Bodh Gaya, and shows Buddha in the Bhumi Sparsha Mudra, which in Hindi means ‘kneel down posture’.

This particular pose symbolically expresses the supreme moment of Buddha’s life just before his enlightenment, when he called upon the earth to bear witness to the pieties performed by him in his previous births.
It is widely perceived that the last sermon of Buddha was given here.

This place has been named Mathakaut Temple because the head of the Buddha statue rests on the ground in a kneeling posture.

While these temples each attract visitors in their own right, one of the most visited and beautiful destinations in Kushinagar is the Watt Thai Temple.

Known as one of the most famous temples in the Indian sub-continent, it attracts tourists from all over the world. The temple was built in order to honour the golden jubilee celebrations of King Bhumibol’s accession to the throne of Thailand.

Nestled in acres of greenery, it covers a huge area and is a beautifully tranquil spot where you can find a rich variety of flora and fauna.

Next to this is the Japanese Temple. The temple is a single circular chamber which houses a golden Buddha, the magnificent Ashta Dhatu, or eight metals, statue.

Kushinagar is also home to the Chinese Temple, which is frequented by tourists from China. The temple is famous for its distinct structural design which makes it stand out from other Buddhist temples. The architecture is Han Chinese, and its designs borrow from various sites in mainland China.

This tiny town is full of beauty and wonder. The astonishing architecture of Kushinagar, coupled with its spiritual appeal to Buddhists, makes it a must-see destination for an intriguing, and spiritual vacation.