Chicago, USA -- Famed magician PC Sorcar's son Manick has won the highest award for artistic achievement at the 2006 conference of the International Laser Display Association (ILDA) for his laser-cum-live show "Enlightenment of Buddha". 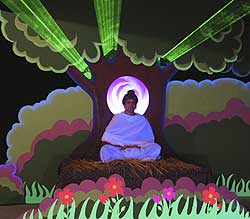 << A scene from Enlightenment of Buddha

Manick Sorcar's company LaserLight Magic, which produced the show, won the first place and bagged the 2005 ILDA Artistic Award for "best use of lasers in a live stage performance" at the ceremony held at Rimini in Italy on March 13.

"I am thrilled," a jubilant Manick said.

"Although this show represents a small portion of Lord Buddha's life, it is a gigantic step in the use of lasers for artistry on stage. I used a variety of laser animation and effects to portray the character of the demon Devaputra Mara and his black magic."

"Enlightenment of Buddha" is an extravaganza of dance, drama and magic that combines life-size laser-animation and three dimensional laser effects in space.

The story takes the audience to India circa 600 BC, where a meditating Gautam Siddhartha under a banyan tree remained undisturbed and attained enlightenment despite constant disruption from Devaputra Mara.

The show largely features live actors except for Mara and his spectacular black-magic acts that are done by laser.

Manick said: "It is heart-warming to see the international panel of judges recognised the creativity I put in with the help of the cutting-edge technology, where I used the narrow, strong beam of lasers as a paint brush."

The show was first performed in October 2005 at the Denver Center for Performing Arts, Colorado, for the 25th anniversary of the Asian Pacific Development Center.

The show, attended by the Denver mayor and other dignitaries, received repeated applause from the audience and rave reviews from the media.

Manick shot to fame in the early 1990s with Deepa and Rupa: A Fairy Tale from India, a film that combined animation and live action, and won the Gold Plaque at the Chicago International Film Festival.

His other films based on fables from India received recognition by winning a series of prestigious awards at various film festivals.

Last year, his animation films were the subject of a research paper for an American student's bachelor's degree in fine arts at the Savannah College of Fine Arts in Georgia.

Manick is author of several lighting texts and has a full-time job as the CEO and president of Sorcar Engineering Inc, which did the lighting designs for Denver International Airport, sport centres in Japan and palaces for Saudi princes. By night, he is an artist and animator.

Laser is to Manick what the magic wand is to the traditional magician.

"I practise the science of lasers during the day. At night, I apply it to art. I marry the two in my stage shows," he said.