by VASANA CHINVARAKORN, Pictures courtesy of SISTER KOVIDA and

Thanks to the Order of Siladhara, women can go forth into the homeless life, just like men

Chithust, UK -- A beautiful Cambridge-trained nurse, Laura Bridgman was going through the most unhappy time of her life. There was something missing; something that wanted desperately to be fulfilled. But she could not find it, not in her reasonably successful career, her possessions, her relationships. 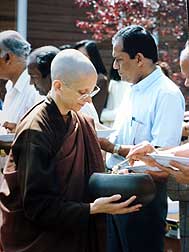 << For over two decades, a small but fully-fledged community of Buddhist nuns, called the Order of Siladhara, has provided space for Western women in their pursuit of spiritual liberation.

The year was 1989. Bridgman, now known as Sister Kovida, recalled the period as her "turning point". It took her three more years to disentangle herself from all the worldly attachments, including breaking up with her partner and taking care of her terminally ill mother. Upon her mother's death, she sought ordination in the forest monastic tradition initiated by Acharn Sumedho, a leading disciple of the late Luang Por Chah of Wat Nong Pah Pong in Ubon Ratchathani.

Over 13 years in the robes, preceded by two years as a novice, Sister Kovida has been an active member of the Order of Siladhara - a small but fully-fledged community of Buddhist nuns in England (see sidebar).

A shaved head and in a deep brown robe (the colour of which was cordially dubbed by her mentor, Acharn Sumedho, as that of "chocolate without milk"), Sister Kovida said her life of total renunciation had provided her with an invaluable vehicle for the practice of Dharma - for transformation and liberation of the mind.

"The whole purpose of the path is for the Dharma [teachings] and the Vinaya [Discipline] to go together," Sister Kovida explained. "The agenda is not about role or status, the colour of robes, how many rules you follow. It's about developing the mind, freeing the heart, understanding suffering and the end of suffering." 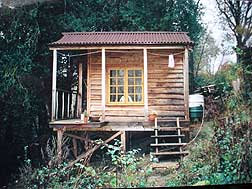 One of the simple living abodes at    >>
Chithust, run in the fashion of the Theravada forest monastic tradition which stresses simplicity, frugality and solitude.

To many, a mendicant's life, like Sister Kovida's, might seem too austere to be satisfying. But Acharn Sumedho said he has witnessed a number of affluent, well-educated Westerners who deliberately chose to turn their backs on the world.

Rather, the problems is that - especially for women - there are very few places that can accommodate their spiritual needs.

In England, there are only two Buddhist monasteries, Amaravati in London and Chithurst in Hampshire, that provide training for women (and men) after the fashion of Wat Nong Pah Pong. The waiting list for ordination, said the venerable monk, is "very long" with applicants coming from as varied backgrounds as the US, the Czech Republic and Russia.

What's in this harsh mode of living - dining once a day, disavowal of money and other worldly possessions - that's so uplifting? Acharn Sumedho, who has spent four decades in the saffron garb, put it simply:

"An ascetic life allows one to train the mind to go beyond desires. We receive only enough food to sustain our lives. We don't regard the lodgings as our own. We accept things people offer us with gladness and a sense of gratefulness.

"In contrast, those living in a rich country with plenty of luxury tend to have developed a sense of competitiveness and dissatisfaction. The more they get, the more they want, being discontented with what they already have."

The senior monk said he was impressed by the strong determination expressed by these spiritually inclined women. They are no less capable than men in the pursuit of Dharma. In fact, women are usually not easily swayed once they have set their mind to the practice. In comparison, monks have had a relatively much easier time in receiving training as well as in dropping out, Acharn Sumedho said. 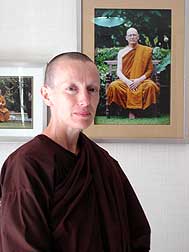 << Sister Kovida in front of the photograph of her mentor, Acharn Sumedho.

Due to space limitations, Sister Kovida said there are at present only 18 women who have been ordained in the Siladhara Order and are residing at the two monasteries. On the other hand, spending years in a tightly-knit, multinational community is a "powerful" way to train the mind to be malleable, the Buddhist nun reckoned.

"You can't hide, or pretend, or keep up a good appearance," she said, "everything will eventually mirror back, [revealing] distortion or limitations of one's views.

"In a multinational Sangha, you learn to respect each other's cultural conditioning and to go beyond attachments to that conditioning. "When jealousy arises, when you're feeling offended, you may say 'I want to be different.

I want them to behave differently.' You cannot control [what's happened] but you can control how to react. The solution is to open your heart to Dharma and to let others into your heart.

"Life is a lot more random in a monastery and you have a lot less control over the conditions. You can cultivate attitudes that try to make a full effort [in whatever you do] and at the same time to let go of the results."

The key to peaceful co-existence, Acharn Sumedho added, is to practice mindfulness. Then one will realise that "wisdom transcends culture" - that one need not let the differences - in gender, language, race - pose as barriers in living together in harmony.

In a way, the presence of the Vinaya, as rigorous as it may appear, is to serve exactly as such a nurturing environment. The conventions in the Siladhara Order are, Sister Kovida described, merely "a way of checking the mind [from] following its habitual impulses". The colour of her robe, for example, is just a form. It could be white, or pink, or brown - but "when you have conventions, you have to be consistent", she said.

"The Vinaya is to support, to restrain the mind, but it is not the end in itself. "

After all, this firm adherence to the basic code of conduct, or Sila, by her seniors is what partly keeps Sister Kovida's conviction in the path she has been following.

She praised how Luang Por (Acharn Sumedho) and other senior monks literally "walk their talk". There is this quality of "honesty, authenticity" that makes her feel intuitively safe, she said, to seek spiritual advice from them. Scandals in some religious traditions are not that uncommon, Sister Kovida noted, for in their spiritual pursuits, women could become very impressionable and vulnerable to exploitation by the men in authority.

"The test is when you live with people. And I still feel that ... I know that Luang Por could give up his fame and glory and it would not be a problem with him."

But people do come and go. Sister Kovida recognises that the genuine refuge lies in the Dharma and in one's own perseverance to pursue the path. And in the Sangha too, like at Chithurst and Amaravati, where several other women on a similar search are diligently practising, living in peace - solid proof, she said, that Lord Buddha's teachings are as relevant to human nature now as they were 2,500 years ago.