KABUL, Afghanistan -- Afghanistan achieved global notoriety when the Taliban blew up the ancient Bamiyan Buddhas 11 years ago. This week opened an exhibition that highlights the country’s rich Buddhist heritage. 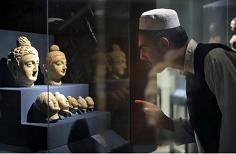 << An Afghan student at the National Museum of Afghanistan in Kabul on April 30. (AFP PHOTO / Bay ISMOYO)

As if to underline the departure from Taliban-era aesthetics, the exhibition is being hosted at the National Museum, rebuilt with international aid after being destroyed by civil war.

Overlooked by the ruins of the neoclassical Darulaman Palace, the museum interior is a sanctuary of quiet arches and marble floors in a violent land.

In the entrance hall is a replica of the Great Buddha of Bamiyan, one of two giant standing statues carved into the cliffs of Afghanistan’s central highlands in the sixth century.

Dating from the second century A.D., the original artifacts in the show were hidden – many of them in secret vaults outside the museum – and protected by museum staff through 30 years of conflict.

One statue shows a lean-torsoed Buddha that, according to museum curator Surkh Kotal, reflects Greek artistic influences introduced in the wake of Alexander the Great’s invasion of Afghanistan.

Others show damage inflicted during Taliban rule, when many of the museum’s artifacts were destroyed.

Among the items spared are relief carvings depicting the Buddha’s life and other artifacts from former Buddhist monasteries in Afghanistan, mainly south of the Hindu Kush mountains.

One of those behind the protection of the treasures is museum director Omarakhan Massoudi, who joined the museum 34 years ago.

“I’m happy we preserved some masterpieces through a difficult time in our country,” said Massoudi, recounting how a decision was made to move major works to secret locations in 1989 as Soviet forces withdrew and civil war loomed.

During that war, he added, some 70 percent of the artifacts were looted and smuggled into neighboring countries to find their way onto the black market.

The museum, along with the palace on the hill, was largely destroyed as rival warlords unleashed artillery and rocket fire on the capital in a brutal struggle for power. Then came the Taliban. Toward the end of their rule they destroyed more than 2,000 artifacts, Massoudi said, and blew up the Bamiyan Buddhas as “idols” in March 2001.

“We have repaired more than 300 statues,” said Massoudi. “Some are on display and we will continue this activity in the future.” The destruction of the Bamiyan Buddhas, he continued, was “a big tragedy because they were a part of our history, a part of our culture.”

Lying on the famed Silk Road trading route connecting east and west, Afghanistan absorbed Buddhism from India and the religion flourished for hundreds of years before the arrival of Islam in the eighth century.

Buddhism has since virtually disappeared from a country where more than 99 percent of the population proclaim themselves Muslim. The museum is dedicated to keeping the nation’s history alive.

“We have to be proud about this very rich heritage of Afghanistan,” said Massoudi, “and we need to transfer it to the next generations.”

In a country still at war, it is still unsafe for the museum to display some of its most important possessions. The priceless 2,000 year-old Bactrian Gold collection of more than 20,000 gold ornaments, hidden by museum staff during the civil war, has been touring the world since 2006.

Closer to home, the ruined grandeur of the Darulaman Palace – clearly visible from the museum – stands as an enormous exhibit reflecting a less than glorious period in the nation’s history.