Kabul, Afghanistan -- Even as once-secure parts of Afghanistan succumb to criminality and the insurgency, and the Afghan financial system hovers on the brink of failure, there are small signs of hope here. A spectacular Buddhist archaeological site is now being excavated by the Afghan government's National Institute of Archaeology, near where Al Qaeda ran a training camp in the 1990s. 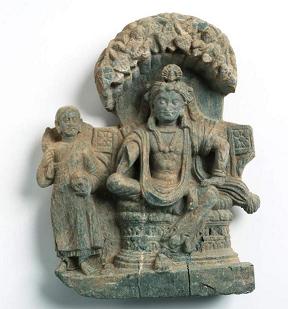 << One of the many Buddhist statues found at the Mes Aynak site in Kabul, Afghanistan.

Work on Mes Aynak ("Little copper well") has proceeded at a rapid pace since it began in May, because the archaeologists - 16 Afghans and two Frenchmen from DAFA (Délégation Archéologique Française en Afghanistan) - are racing against time.

Within a year, the site is slated to be destroyed by Afghanistan's largest single foreign investment, a Chinese-run copper mine not 900 yards away. The plan is to document the site thoroughly and attempt to remove as many of the smaller stupas and statues as possible for conservation in the National Museum or possibly a future local museum. Because the buildings are mudbrick and schist, a wholesale relocation isn't possible.

Visiting the main 262-by-131-foot Buddhist temple, which once boasted a stupa 32 to 50 feet high, it was hard not to gasp. The head of DAFA, Philippe Marquis, pulled back plastic protective sheets to reveal statue after statue of Buddhas and donors. In many niches, large hands and feet peeked out, the rest of the bodies still obscured under mudbrick. Some statues were intact except for their heads, removed by looters. There are wall paintings in still-vibrant reds and black, and even the stump of a wooden pillar.

Mes Aynak is impressively large. Scattered in the hills around the ruined temple are dozens of areas where the archaeologists will do test digs. "Every mound is an archaeological site," says Mr. Marquis. There was a civic and commercial area - I saw two places where Afghan workers were confidently clearing the dirt away from finely worked terra-cotta storage jars - and ancient mining remains. "The question is whether the mining drew the monastery, because of its wealth, or whether the monastery worked the mine," Mr. Marquis explained. Areas where the ground is blackened are sites of ancient copper smelting and will be investigated thoroughly. (The mine was abandoned some time in the early Islamic period when deforestation made it impossible to continue smelting.)

At just over one square mile, Mes Aynak is one of the country's largest Buddhist sites, equal in importance to the famous ruins in Bamiyan and the looted site of Hadda. Mr. Marquis says that it's likely Mes Aynak was begun in the first century, but most of the ruins he showed me date from the fourth and fifth centuries.

During that period, and for the next century or two, he says, it's possible that Afghanistan was ruled by a theocratic Buddhist kingdom, "like Tibet."

Must the site be destroyed? Mr. Marquis says the site survey now taking place is aimed at providing the Afghan government with the means to make an informed decision about Mes Aynak's fate.

Peition to the President of Afghanistan, Hamid Karzai
http://www.change.org/petitions/president-hamid-karzai-prevent-destruction-of-ancient-site-of-mes-aynak-the-environmental-damage-3#

"Our job is to help Afghans set up this operation. Our budget of $10 million will be spread over three years. The Chinese have an obligation for excavating, but not for restoration of the clay statues. We are asking the U.S., Italy, China and the U.N. for money - we are trying to create an international coalition like the one fighting in Afghanistan."

Mr. Marquis is convinced of the significance of the site for our knowledge of the Buddhist world and argues that Mes Aynak, if properly excavated and preserved, could offer "a reward a hundred times bigger than the copper mine. The copper mine is for 20 or 30 years. But this will be around for much, much longer."

The mine is supposed to bring about $880 million to the government before production, but the payments depend on contractual benchmarks that have not been met. The Afghan government didn't accept the Chinese plans for waste storage - which is a good thing - but this will delay the series of payments.

The $880 million is equal to the annual customs and tax revenue of Afghanistan, but given the realities of corruption, it is questionable what impact it will actually have on Afghans' lives. By contrast, the ruins, Mr. Marquis says, "are for everybody. This is for the future of Afghanistan."

The unequivocal good news is that the work is proceeding under the efficient Afghan supervision of Nadir Rasouli, with Afghans doing all of the excavation. Mr. Marquis is doing the documentation only. The Afghans I met, who are working under Mir Zakir, deputy director of the National Institute of Archaeology, were enthusiastic about their labor and eager to show me their finds. "They are very proud of their work," Mr. Marquis says. "They are not working only for money. "

-----------
Ms. Marlowe is a visiting fellow at the Hudson Institute who blogs for World Affairs. She reports frequently from Afghanistan.