Afghanistan moves to salvage ancient Buddhist city  and its economy

MES AYNAK, Afghanistan -- It had the potential to be another Afghanistan Buddha disaster, recalling the Taliban’s destruction of two ancient statues that had stood for centuries in this country’s west: A buried Buddhist city lost to time was about to be obliterated by what promised to be one of the largest copper mines in the world. 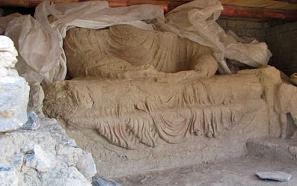 << The base of a life-sized Buddha, one of more than 200 found at the Mes Aynak site, sits along with hundreds of other statues depicting figures from Buddhist life and teachings in Afghanistan. | Jay Price/MCT

Now, however, thanks to delays in construction of the massive mine and a hefty influx of cash from the World Bank, the 1.5-square-mile Mes Aynak complex is an archaeological triumph – though bittersweet.

An international team of archaeologists and more than 550 local laborers are now frantically excavating what turns out to be a unique window into Afghanistan’s role on the ancient Silk Road connecting China and India with the Mediterranean.

With its Buddhist city, a ring of perhaps a half-dozen monasteries and a striking complex of workshops and mine shafts built into a high mountain ridgeline at an altitude of 8,200 feet, the site shows the interplay of Buddhism, mining and trade during the years it was in operation, now thought to be from the fifth to the late eighth centuries.

It underscores the conflict between cultural preservation and Afghanistan’s desperate need to find a way to survive as the international community winds down its involvement in the country. The copper here may be worth $100 billion by some estimates, five times the estimated value of Afghanistan’s entire economy, in which the government and military are funded mainly by foreign countries. The best private-sector jobs are with foreign relief groups.

A Chinese consortium agreed in 2007 to pay $3 billion for a 30-year lease on the mine. It was the largest private investment in Afghan history, and Afghan officials hailed it as a key component in building an economy that one day won’t rely almost solely on donor nations and the opium trade. They said it would generate hundred of millions of dollars a year for the government eventually and would provide thousands of jobs.

The massive, open pit mine, though, would destroy most or all of the ruins, which were larded with well-preserved frescoes and more than 1,000 statues, including hundreds of Buddhas.

The specter of Buddhas being dynamited or bulldozed immediately sparked comparison with one of the greatest cultural disasters in Afghan history: the Taliban’s destruction in 2001 of the giant Buddhas set into cliff walls in Bamiyan province. But a small group of French and Afghan archaeologists cut an informal deal with the Ministry of Mines in 2009 for time to perform a "rescue excavation," to recover as many key artifacts and document the site to whatever degree possible before the mining begins.

When that will be, they don’t know. A December deadline came and went. Now they have until June to finish work on the primary sites, said Mossadiq Khalili, the Afghan deputy minister of cultural affairs. Work on some of the monasteries on the edge of the mine area could continue for several years, he said.

The archaeologists feel almost certain that they have until at least 2016, because so little progress has been made on the mine. There seem to be no firm plans yet for the necessary power plant, smelter and rail line, or for the mining operation itself.

"So, if that’s correct, it means that there is, I won’t say plenty of time, but a reasonable, good amount of time to work on this site," said Philippe Marquis, the director of the French Archaeological Delegation in Afghanistan, which has been operating in the country since 1922 and acts as an adviser to the Afghan government.

What makes the prospect of success even greater, Marquis said, is the international interest in getting the mine up and running. Afghanistan has long been desperately poor, but it’s thought to have untapped oil, gas and mineral reserves worth perhaps more than $1 trillion. The World Bank, keen to see the mine project succeed, committed $8 million last year to the archaeological project.

Without the copper mine, Mes Aynak and its artifacts very likely would have been destroyed anyway, Marquis and others think, looted by dealers in stolen antiquities, the fate of many Afghan archaeological sites. But with hopes for an economic boon, there’s a strong chance that the site will be documented and its artifacts preserved.

Many of the site’s statues and paintings have been removed, and the rest will soon follow, said Nicolas Engel, an assistant director of the French Archaeological Delegation in Afghanistan.

It’s an adventure just to visit the site, in Logar province about 25 miles south of Kabul. Al Qaida trained here before the Sept. 11, 2001, terrorist attacks and the highway is still subject to occasional Taliban assaults. The massive copper mine site is fenced and heavily guarded. One tunnel, apparently dug by the Russians when they occupied Afghanistan in the 1980s, is thought to be booby-trapped, and land mines left from their presence are still a major hazard. One laborer was wounded last year when he struck a mine while digging, Engel said.

Everywhere are the telltale signs of copper mining going back centuries. Blankets of fused slag – the byproduct of the old copper-smelting operations – tint the mountainside black. In one place the slag was piled nearly 40 feet high, evidence of thousands of years of production.

Shovels and picks ring out against rock as local laborers dig. Large sections of the city have emerged, as have roads and alleys that cut across several neighborhoods. Several monasteries, each on a hill or mountain above the main city, have been excavated, and more than 1,000 sculptures have been found, including Buddhas more than twice life-sized. Ancient manuscripts and decorative woodwork also have been uncovered.

On a recent sunny day, British archaeologist Thomas Eley sat on a wall sketching the layout of a small building and pondering a small indentation beside a heavily scorched depression in the floor. More than 700 coins had been found in the building, and he said it appeared to be a place where coins had been made from the copper smelted atop the mountain.

Across an ancient street and several buildings away, another archaeologist was sketching the unusually thick walls and small, extra-secure doorways of what may have been a bank where copper and coins were stored. All around them, laborers were uncovering more buildings, more pieces of the puzzle of Mes Aynak.

"I’m an archaeologist, so of course I’m sad about what will happen here, but it’s also life, and life has to go on," said Usman Ishanzada, who’s from Tajikistan. "If this mine can bring some life and jobs for local people, why not?"

The site poses intriguing questions about the era when Buddhism was the dominant religion in Afghanistan, Marquis said.

The way monasteries are arrayed around the city and mine creates almost a wall around the site, which almost suggests a type of military activity, too, which would be a previously unknown role for monks.

The success of the project from a scientific and economic standpoint is becoming a positive lesson for the Afghan population and once-skeptical officials in the government, who thought the archaeological efforts would slow the mine and cause problems. Instead they’ve pumped money into the local economy, improved security and made it clear that such work can coexist well with economic development projects.

It’s also showing that even projects unrelated to mines may have big benefits for local communities, Marquis said.

It seems unlikely, he said, that the Afghan government will stop work on the excavation without any mining. That not only would trigger an international uproar but also would make hundreds of workers jobless, a major security issue. Many workers here already acknowledge that they were part of a rocket attack last August that was staged to protest the destruction of villages that sat atop the mine, Marquis said. Their hostility, however, has turned into enthusiasm now that they’ve been hired on.

The plan is to remove all the artifacts, even the largest statues and the domed shrines called stupas. For now, some statues are being stored in shipping containers at the site, and some have been sent to the national museum in Kabul. Afghan officials hope to build a museum just north of Mes Aynak.

Marquis said it was possible that time wasn’t the major challenge now.

"Our biggest problem has become the long-term conservation of all these things that are being saved," he said. "We need to work on a plan for what to do with them."