Kathmandu, Nepal -- A Buddhist monastery near Kathmandu is enjoying a surge in popularity after its spiritual leader directed its 300 nuns to use martial arts techniques. 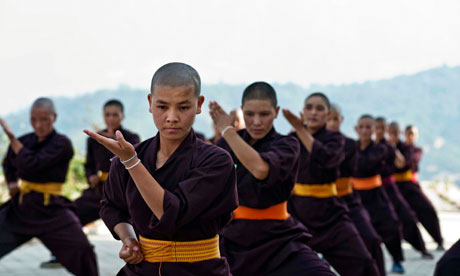 Enrolment is rising and Buddhist nuns as far afield as the Himachal Pradesh in India want to become kung fu instructors.

The Druk Gawa Khilwa (DGK) nunnery near the Nepalese capital teaches its nuns a mixture of martial arts and meditation as a means of empowering the young women. In Buddhism, like many religions, the voices of women have traditionally been muted. But the leader of the 800-year-old Drukpa – or Dragon – order, to which DGK belongs, is determined to change all that.

"As a young boy growing up in India and Tibet I observed the pitiful condition in which nuns lived," says His Holiness the Gyalwang Drukpa, the spiritual head of the Drukpas.

"They were considered second-class while all the privileges went to monks. I wanted to change this."

Although nuns have usually carried out only household chores in Buddhist monasteries, the nuns of DGK, who come from places as far apart as Assam, Tibet and Kashmir, are taught to lead prayers and given basic business skills. Nuns run the guest house and coffee shop at the abbey and drive DGK's 4X4s to Kathmandu to get supplies.

But for many, the breakthrough was the introduction of kung fu three years ago, shortly after the Gyalwang Drukpa visited Vietnam and observed female martial arts practitioners there.

"Spiritual and physical wellbeing are equally important for our nuns," says the leader.

Sister Karuna, a soft-spoken young nun from Ladakh in the north of India, says kung fu has given the nuns self confidence and also helps in meditation. "We love kung fu," said Karuna, as she prepared to swap her maroon prayer robe for a martial arts suit with a bright yellow sash. "Now we know we can defend ourselves.

We also have the fitness for long spells of meditation."

Jigme Thubtem Palmo, 32, who left her family and a career as a police officer in Kashmir six years ago to join the monastery, says young women in the region are now more interested in becoming nuns than before. "We will soon build facilities for 500 nuns," she said.

Jetsunma Tenzin Palmo, a former librarian at the School of Oriental and African Studies in London, says she will introduce kung fu at the nunnery she has set up in the Indian state of Himachal Pradesh.

"It's excellent exercise, good for discipline, concentration and self-confidence," says Palmo. "Also, when any young men in the area know nuns are kung fu experts, they stay away."