Kathmandu, Nepal -- The ancient ruins of Tilaurakot are situated about five kilometers north of Taulihawa, the present day district centre of the Kapilbastu District in Nepal. 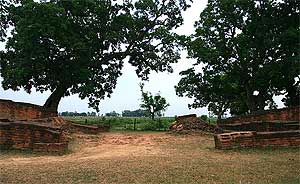 << The Eastern Gate of Tilaurakot

Although there is some controversy surrounding the Tilaurakot ruins, it is generally agreed that the site was the citadel complex of the surrounding Kapilvastu Kingdom which was founded by Suddhodana, Siddhartha Guatama Buddha’s father.

The most recent of the excavation projects at Tilauarakot was carried out by Robin Coningham and Armin Schmidt in 2000. Their excavations uncovered the remains of a walled fortress of considerable size, with foundations of several buildings within the fortress.

Interestingly, the last three letters of the name Tilauarakot, “kot”, is Nepalese for “fortress”. A short way from Tilauarakot is a small museum which displays coins, black polished pottery and jewelry, as well as a variety of ornaments and toys which have been recovered from the site. Many of these interesting items date back to the period between the seventh century BC and the fourth century AD..

The Buddhist pilgrimage site of Lumbini is situated about 25 kilometers from Tilaurakot. It is at Lumbini that Siddhartha Guatama Buddha was born. He was the founder of Buddhism and is generally seen by Buddhists to be the Supreme Buddha of the current age. Guatama Buddha is the key figure in Buddhist teachings with accounts of his life, monastic rules and discourses having been passed down by oral tradition and ultimately being recorded in writing some 400 years after his death.

It is believed that Gautama Buddha was raised and lived in Tilaurakot until the age of 29 years. According to accepted tradition, Gautama Buddha was a prince who lived the first part of his life being unaware of worldly miseries. He married Princess Yasodhara when they were both 16 years of age and at the age of 29 a son was born to the couple. It was also at this time that Guatama Buddha was confronted with the fact that there were many hardships in the world. He felt compelled to search for enlightenment and answers to his many questions and, therefore, left his home on this lifelong quest. Fragments of pottery discovered at the site have been dated back to between 1000 and 600 B.C. – the period during which the Buddha lived, adding convincing evidence that Tilaurakot is indeed the site where he once lived.

With the long history and spiritual significance of the area, Tilaurakot is a place worth visiting for travelers in Nepal.