Kathmandu, Nepal -- Despite appeals to halt the centuries-old custom of animal sacrifice, Gadhimai festival on Tuesday started in southern Nepal with millions of devotees flocking from various parts of the country and India. 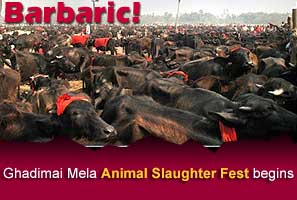 << Thousands of buffaloes are waiting to be sacrificed at the Gadhimai Mela, the largest "animal slaughter" in the world

People today queued up for worshipping Gadhimai, known as the Goddess of Power, as early as 2.45 am, eye-witnesses said.

Amid tight security, Nepalese Health Minister Umakanta Chaudhari reached the 260-year-old temple at 2 am and took part in the worship, according to a local radio.

It is estimated that some 35,000 to 40,000 buffaloes, which are brought mostly from India, for the world's largest ritual sacrifice at the temple.

"I personally find it hard to imagine that your heart can withstand such cruelty, knowing that you, being the head of the country, are ultimately responsible," she wrote.

"We beg you to consider our plea. As the two important persons you have the ability to show wisdom, compassion and courage by doing everything to stop the killing of innocent creatures in the name of the God," the letter said.

The government has, however, remained non-committal on its role in ending the custom.

We will not interfere in the centuries-old tradition of the people, an official said.

'Buddha Boy' Ram Bahadur Bomjan has been meditating near the temple premises to stop the sacrifices, while Tibetan Buddhist master Lama Zopa Rinpoche had requested all Buddhist centres and students to read the Golden Sutra and pray for halting the killing.

The local administration has mobilised some 1100 security personnel to maintain security and law and order in the area.

Around five million people, 80 per cent from India, will arrive to observe the festival this time. Some 3,00,000 to 5,00,000 animals will be sacrificed during the two-day festival.