AYUTTHAYA, Thailand -- The ruined temples of Ayutthaya have survived centuries of tropical heat and rain, but experts fear some have been weakened by Thailand's devastating floods and may be at risk of collapse. 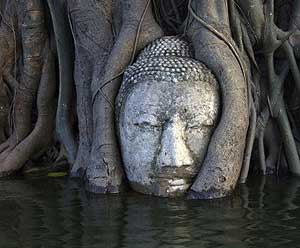 Unusually heavy monsoon rains caused a deluge that swept across much of central and northern Thailand from July, leaving more than 600 people dead and damaging millions of homes and livelihoods.

Ayutthaya, around 80 kilometres (50 miles) north of Bangkok, was in one of the worst-hit parts of the country and dramatic aerial images last month showed its temples as islands in a vast lake of floodwater.

The structures spent weeks swamped by the murky waters and now fresh cracks have appeared in some of the pagodas that dominate the historic capital, a major tourist attraction and UNESCO World Heritage site.

As the waters retreat, visitors have been warned not to climb onto the structures in case they collapse.

Chaiyanand Busayarat, director of Ayutthaya Historical Park, estimated at least 650 million baht ($20 million) worth of damage had been done, but said the full consequences of the floods were not yet known.

"The monuments' construction was not designed to carry this much weight (of water). The floods have also softened the ground, making it unstable. Buildings could sink or, in the worst case, they might collapse," he told AFP.

The waters have receded from much of the centre of the city, although some of the many temple compounds dotted around the historical park site are yet to fully dry out.

Erected at the confluence of the Chao Phraya, Pa Sak and Lopburi Rivers, the Ayutthaya monuments have long been susceptible to seasonal flooding.

The old city used to be protected by a network of canals that drained the water away, said a heritage expert for the United Nations cultural body UNESCO, who asked not to be named.

"A lot of those canals have been filled over or have naturally become more shallow over time," she told AFP.

"There is some fear that there might have been some settling of the foundations of the monuments which could lead to monuments becoming unstable," she added, following a UNESCO visit to the area on Thursday.

She said it was still unclear how much damage had been caused by the weeks of flooding.

"It is hard to tell at this time whether that's more than the monuments can withstand or if it is in the range that is tolerable for them."

Ayutthaya, founded around 1350, was one of the capitals of the old kingdom of Siam and at its peak had three palaces and more than 400 temples.

After four centuries as the country's capital, the city fell to Burmese invaders in 1767 and most of it was destroyed.

Many of the remaining ruins have been painstakingly restored.

At the Wat Phra Ram temple site, Chaiyanand indicated a vertical crack in one of the brick structures around two metres (yards) long.

"I think this happened during the flood but I have to say that small pagodas like this are not that scary. The big ones one which weigh many tons are the more concern, and much more scary for me," he said.

Of more immediate concern to many in the city is the need to fully reopen to tourists.

Receding waters have left large quantities of detritus -- everything from plastic bags to shoes to tree branches -- strewn across the monument grounds.

Suneewan Pudson, 65, one of a band of cleaners busily sweeping an area around the reclining Buddha at Wat Lokayasutharam temple, said she and her colleagues were determined to help return the site to its former glory.

The task is a daunting one. Some local people sought refuge around the monument during the floods, leaving piles of rubbish and even an abandoned and rusting three-wheeled tuk tuk taxi.

"I am sad because this is an ancient site which is a tourist spot so we are supposed to protect it. But we did not know that the flood would be this high. It has never been like this before," Suneewan told AFP.