by Walter Jayawardhana, The Buddhist Channel, May 26, 2012

Taxila, Pakistan -- The ancient Buddhist learning center of higher education Taxila, situated in modern Pakistan has been declared one of the most endangered historical sites in Asia by the Global Heritage Fund which promotes the preservation of historic architectural sites around the world. 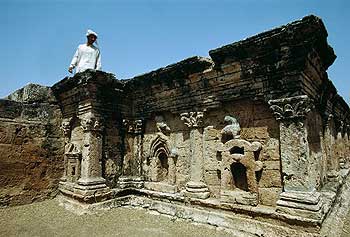 It is one of the finalized  list of the top 10 most endangered sites in Asia.

Taxila is  in the Rawalpindi District of Punjab province of Pakistan, and an important archaeological site.

The city dates back to the Gandhara period and contains the ruins of the Gandharan city of Takshasila, which was an important Hindu and Buddhist centre, and is still considered a place of religious and historical sanctity in those traditions.

In 1980, Taxila was declared a UNESCO World Heritage Site, and was ranked as the top tourist destination in Pakistan by The Guardian newspaper in 2006.

Besides Taxila, nine other endangered sites include Ayutthaya in Thailand, a former Siamese capital known as the "Venice of the East", Fort Santiago and Intramuros in the Philippines, Kashgar, one of the last preserved Silk Road cities in China, Mahasthangarh, in Bangladesh, Mes Aynak, an Afghan Buddhist monastery complex on the Silk Road, Myauk-U, capital of the first Arakenese kingdom in Myanmar, Plain of Jars, a mysterious megalithic site in Laos, Preah Vihear, a Khmer architectural masterpiece in Cambodia, and Rakhigari, one of the biggest, ancient Indus sites in India.

A complex of caves, monasteries, and mosques, the city of Taxila in Pakistan was a crossroads of industry in the ancient Middle East. Four distinct settlement sites—each belonging to different time periods - show the evolution of urban development over the course of five centuries, beginning in the sixth century B.C., according to the Global Heritage Fund.

Today the ruins and nearby Taxila Museum suffer from insufficient management - some areas of the site serve as garbage dumps, for example. Other threats include looting, the toll of regional war, and uncontrolled mine blasts that shake excavated artifacts from museum shelves.

In the Mahabharata, the Kuru heir Parikit was enthroned at Takasila. Traditionally, it is believed that the Mahabharata was first recited at Takasila by Vaishampayana, a disciple of Vyasa at the behest of the seer Vyasa himself, at the Sarpa Satra Yajna (Snake Sacrifice) of Parikit's son Janamejaya.

Takshashila is also described in some detail in later Jataka tales, written in Sri Lanka around the 5th century. The Chinese monk Faxian (also called Fa-Hien) writing of his visit to Taxila in 405 CE, mentions the kingdom of Takshasila (or Chu-cha-shi-lo) Xuanzang (also called Hieun Tsang), another Chinese monk, visited Taxila in 630 and in 643, and he called the city as Ta-Cha-Shi-Lo. The city appears to have already been in ruins by his time. Taxila is called Taxiala in Ptolemy’s Geography. In the Historia Trium Regum (History of the Three Kings) composed by John of Hildesheim around 1375, the city is called Egrisilla.

Takshashila became a noted centre of learning at least several centuries BCE, and continued to attract students from around the old world until the destruction of the city in the 5th century. At its height, it has been suggested that Takshashila exerted a sort of "intellectual suzerainty" over other centres of learning in India., and its primary concern was not with elementary, but higher education. Generally, a student entered Takshashila at the age of sixteen. The Vedas and the Eighteen Silpas or Arts, which included skills such as archery, hunting, and elephant lore, were taught, in addition to its law school, medical school, and school of military science. Students came to Takshashila from far-off places such as Kashi, Kosala and Magadha, in spite of the long and arduous journey they had to undergo, on account of the excellence of the learned teachers there, all recognized as authorities on their respective subjects.

Takshashila is perhaps best known because of its association with Chanakya, also known as Kautilya, the strategist who guided Chandragupta Maurya and assisted in the founding of the Mauryan empire. The Arthashastra (Sanskrit for The knowledge of Economics) of Chanakya, is said to have been composed in Takshashila itself.The Ayurvedic healer Charaka also studied at Taxila.He also started teaching at Taxila in the later period. The ancient grammarian Panini, who codified the rules that would define Classical Sanskrit, has also been part of the community at Takshashila.

The institution is very significant in Buddhist tradition since it is believed that the Mahayana branch of Buddhism took shape there. Jivaka, the court physician of the Magadha emperor Bimbisara who once cured the Buddha, and the enlightened ruler of Kosala, Prasenajit, are some important personalities mentioned in Pali texts who studied at Takshashila.