by Walter Jayawardhana, The Buddhist Channel, May 31, 2012

Rajgir, India -- “The ruins of Nalanda stretches out below us, a poem in red. The remains of this ancient monastic university, located on the way from Patna to Rajgir consist of classrooms, stupas, monk's cells and temples. The crimson of the bricks glows in the light of the midday sun,” said Kauusalya anthanam writing a news feature on the world’s first university, the Nalanda. 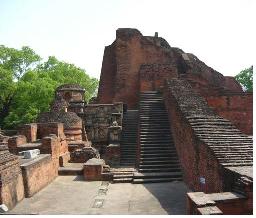 “Some of the bricks look worn with age while others look bright and new; one admires their quality and endurance for the university is said to have flourished from the 5th to the 12th Century A.D. I have only to shut my eyes to think of the robed monks making their way across the impressive structures to attend classes in logic, grammar or medicine, and above all Buddhist studies. All the subjects Nalanda was famous for and that brought students here from many countries” the journalist from the Hindu said further.

Nalanda was believed to have been visited by Buddha and Mahavira in the 6th Century B.C. Mahavira is said to have often spent the rainy season here, according to Jain texts. The ruins conjure up a panorama of planned and well-executed architecture. During the excavations, nine levels of construction were discovered, contributed to by the various dynasties - the Gupta, Sunga and Pala rulers. The ruins are at various levels. Presiding over them all are the grand ruins of the great temple with the shallow stepsleading up to it. Our guide,Santhanam said an elderly man, has a Masters in Pali.

“The curved shape that forms the base on the ground is typical of the architecture of the Gupta dynasty while the bricks in the reconstructed ruins are an intermingling of various centuries,” he says.

“As one walks up the steps to a reconstructed parapet or down to the granary or the cell of the monks with its stone beds, it is easy to visualise their way of life. The Chinese pilgrim Fa Hien perhaps visited Nalanda in the 4th Century A.D. while Hiuen Tsang did so in the 7th Century A.D., our guide goes on. Hiuen Tsang's lyrical description when he came here during the reign of King Harshavardhana who was a great patron of Nalanda matches the poetic name of the university that derived from the lotus, the symbol of knowledge: “where an azure pool winds around the monasteries, adorned with the full-blown cups of the blue lotus…”

“Nalanda spread its fragrance till the invasion by the Turks destroyed it in the 12th Century. The university was also devastated by fire. It vanished from view, an obscure mound till Francis Buchanan discovered it in 1812. But it was Sir Alexander Cunningham who identified it as Nalanda in 1861. The Archaeological Survey of India took up the excavation in a big way in the early years of the last century. At the archaeological museum nearby we see magnificent images of the Buddha, terracotta figures and artifacts recovered from the site. But what is unique is the image of Trailokyvijaya trampling over Siva and Parvati, testifying to the tussle between Buddhism and Hinduism.

“From Nalanda we hop over to Rajgir, just 12 km away. We stop at the base of the hill at the small ropeway station. A chair car appears swinging before me, someone thrusts me in, slams the horizontal bar and before I know it I am airborne with only my prayers to keep me company. Eyes shut, I manage to reach the top. But is it worth it! The domed white structure that houses images of the Buddha in the four corners is striking.

“But more impressive is the fact that the Buddha would climb up here to Griddhakuta or Hill of the Vultures to deliver his sermons to his disciples and to the crowds gathered below.

“After descending the hill and travelling a short distance, we are brought to earth with a nasty thud as we near the remnants that are claimed to have been a royal jail. It is believed King Bimbisara of Magadha was imprisoned here by his son Ajathashatru in an unforgivable hurry to get the throne.

“We soon come upon a magnificent sight in Kolhua — a huge stupa surrounded by smaller ones. Towering above them is the Asokan pillar mounted by the lion — he sits there firmly, lord of all that he surveys and witness to the events of the past 2,300 years! The plaque says this was where Buddha preached his last sermon and announced his approaching nirvana.

:We also visit the stupa now in ruins, which marks the spot where one eighth of the relics of the Buddha were buried. As we drive back to Patna, the past seems more potent than the present and the intervening centuries, a mirage.”