Berlin, Germany -- A recent article about an ancient Tibetan sculpture may sound like something you've seen in the movies. It involves an important archaeological find, it was once in hands of Nazis, and it holds a newly uncovered revelation. The statue, it turns out, was carved from a meteorite that crashed to the Earth 15,000 years ago. 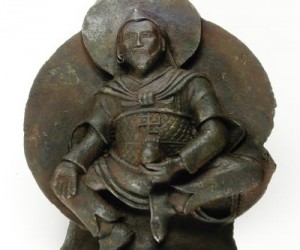 According to the current edition of the online journal Meteoritics and Planetary Science, the "Iron Man" - as it is known - is a 10-kilogram (22-pound) statue found first in Tibet, which is likely to be Vaisravana, the Buddhist King of the North. Seated, he wears a large swastika on his midsection, considered a good-luck symbol in Buddhism that was later co-opted by the Nazis in Germany.

Experts have proved the statue, which remained in a private collection in Munich until 2007, when it is made available for study, is crafted from an incredibly rare form of nickel-rich iron present in falling stars.

Evidence includes the sculpture's telltale mineral content and structure, which give revealed it as a kind of meteorite called an ataxite. "It is rich in nickel, it is rich in cobalt. Less than 0.1% of all meteorites and less than 1% of iron meteorites are ataxites … It is the rarest type of meteorite you can find," Elmar Buchner of the Planetology Institute at Stuttgart University told the BBC.

Buchner, who has been analyzing the Buddhist statue for the last five years, believes it was carved from the Chinga meteorite that landed somewhere between Mongolia and Siberia thousands of years ago.

He also thinks it has some sort of special aura: "It is extremely impressive, it was formerly almost completely gilded – there is a great mystery represented by it," he told the online journal.

Meteorites have been considered God’s messengers in several cultures since ancient times, and early knives and jewellery were often carved from fragments of space rocks. But tracing their exact origins has proved difficult for scientists, at least until now.