Taxila, Pakistan -- The local and foreign tourists have called upon UNESCO and federal as well as provincial government to take stock of the construction of wall around earliest Buddhist stupa and monastery known as Dharmarajika Stupa dated back to second century AD near Taxila by private developers as tourists entrance has been completely restricted leaving no place to visitors. 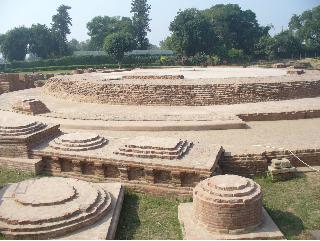 Dharmarajika Stupa is one of eight shrines constructed in the 3rd century BC during the reign of Emperor Ashoka of the Mauryan dynasty to house relics of the Buddha. The shrine gradually expanded, reaching its largest size in the 2nd century A.D. The name Dhararajika stupa comes from an inscription of the time of the Parthian ruler Azes. The main stupa was probably built by Dhararaja, a title of the Mauryan emperor Asoka. The site is divided into two parts: the stupa area in the south and his monastic area in the north.

The main attraction on a raised terrace, approached by four flights of steps. It was long known as Chir Tope because in the 19th century it was torn asunder (Chir) and the relics robbed by a French general of Ranjit Singh. The foundation consists of a wheel of spokes (Dharam-Chakra). Around the stupa is a paved ambulatory passage outside we have a number of votive stupa erected later by the pilgrims.

On the floor of the main stupa three hoards of coins were found, as a ritual burial by the visiting pilgrims. The coins belong to the Scythian, Parthian, Kushana and Indo-Sassanian rulers. The votive stupas are of different kinds, from one of which a relic casket was recovered and presented to Sri Lanka in 1924. In between can also be seen small chapels containing Buddhas and Bodhisattvas of stucco.

The whole construction here continued to the end of the seventh century A.D. when Buddhism declined and meets its doom for lack of patronage. Keeping in view its importance and significance, UNESCO owned it, declared the site as “world cultural heritage” in 1984 while Government of Pakistan notified them as “protected sites” under the Antiquities Act 1975. It is important to mention here that Section 22 of Antiquities Act 1975 prohibits any structure or construction within 200 feet of protected sites’ outer portion. The rule stats” Not withstanding any thing contained in any other law for the time being in force, no development plan or scheme, or new construction or, or within, distance of two hundred feet of a protected immovable antiquity shall be undertaken without approval of the Director General”.

The construction of wall by the private developers at the entrance of earliest Buddhist stupa and monastery known as Dharmarajika Stupa dated back to 2nd century AD has banned the entry of the domestic and foreign tourists, already collapsed tourism sector of the country. On the local and foreign tourists’ complaints when this reporter visited the site, it was observed that local developer has erected concrete wall and a huge gate at the entrance of site completely banning entrance to the site.

The sign board installed by the department at the entrance of the site for information and guidance of tourists and visitors has also been removed at throw away at nearby poultry farm and the site seems some private building rather than an ancient site. Local and foreign tourists wander on the road leading to the site in search of the site which is available on the guide map for the tourists but not present on the spot. Vjwal Prodhar, a tourist from Nepal has said that he was stunned to see that a wall has been erected by non-government elements around Buddhist site.

He said it has great religious importance to Buddhists and such construction is like trashing its sanity. He said that UNESCO should take stock of the sorry state of affairs. Sukan Yacha, a tourist from Thailand expressed his utmost grief over restricting the entry of the tourists at the Buddhist site. He said that the site has great religious importance to the followers of Buddhism and such act has hurt their sentiments.

Akongi, a tourist from Japan said that after visiting the site it looks like that it is personal property rather that the world cultural heritage. He said that it seems that national and international organizations who claim to be custodians of the world cultural heritage have turned blind eye to the issue due to reasons best known to them. He said that the situation is intolerable to the Buddhists and the Buddhist organizations should play their role to free the site from personal “captivity”.

I came from Rawalpindi along with my some friends who came from Multan to see the ancient sites at Taxila and we travel five times on the road but failed to find the stupa. Said Asad Shah, a local tourist. He said that it is ridiculous that information sign board has been removed from the site and the authorities are in deep slumber over the issue. Dr Aneesa Khan, another tourist who came from Islamabad has condemned the apathy of the department of archaeology, provincial and federal government turning their back to this serious issue and looking the whole issue as idle spectator. She said that construction of wall and installing a gate at the entrance is like making this world cultural heritage site as personal property.

It may be recalled here that the Supreme Court of Pakistan on August 6, 2007, had ordered removal of all encroachments in and around the archeological sites throughout the country. The order was passed by apex court while hearing an identical matter of Lahore city under Human Rights case No. 179 of 2007. In the case, the two-member bench, comprising Chief Justice Iftikhar Muhammad Chaudhry and Justice M. Javed Buttar, has directed the Punjab government to remove encroachments from historical places within three months.

The court also directed the chief secretaries of all the four provinces to take proper action to remove the encroachments around the historical places in their respective provinces. Subsequently all the Chief Secretaries were directed by the federal government with regard to court’s directives.