Under the sands of time: Ancient Buddhist mound discovered in Sector E-11

Islamabad, Pakistan -- A group of researchers have discovered an ancient mound in Sector E-11 where they found a bovine terracotta pottery fragment that could date back to the Bronze Age. 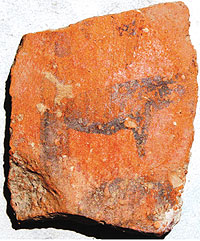 The mound, discovered during documentation work by the Potohar Research Group (PRG) and the National College of Arts (NCA), is in a precarious situation and needs preservation.

It lies at the northern end of Sector E-11 on Service Road North, a few yards from nearby houses and slums.

The PRG found the bovine figure on a terracotta potsherd during surface collection and without any excavation work.

NCA Rawalpindi Campus Director Dr Nadeem Omar Tarrar says that he sent a picture of one of the potsherds to Italian archaeologist Luca Olivieri, who reckoned it might date back to the Bronze Age.

Muhammad Bin Naveed, an archaeologist accompanying the researchers, said the mound is in extremely precarious condition and needs urgent excavation work for a detailed picture of the site.

Tarar called on the Federal Department of Archaeology and Museums preserve the site from encroachment and declare it a protected monument. “It is not unlikely that the mound is part of an ancient settlement that has a cemetery on top of it, but that will require careful investigation”.

He said they have sent relics to archaeologists to ascertain the age of the mound.

The researchers also said that in the nearby areas, there are signs of a historic graveyard which would date back to the dawn of civilisation. Tarrar said they have also found a rock formation which resembles Greek era work.

He said the Margalla foothills have been an important route and a hub of the Gandhara Civilisation, and the “discoveries are just a tip of the iceberg”.

Excavation work has been carried out in the vicinity of Islamabad in the past and the remnants of a Buddhist site were recovered from Sector G-12. All of the artifacts are on an ancient route that Buddhist caravans once used to reach Taxila.

Researchers hoped the authorities will carry out excavation at the site and protect the heritage site from further pillage. They suggested fencing off the mound to save it from further encroachment.

Capital Development Authority Spokesman Asim Khichi told The Express Tribune that a team of archeologists will visit the site soon.