Mes Aynak, Afghanistan -- The Buddhist treasure troves of Mes Aynak in Afghansitan have had their fair share of disturbances over the years. 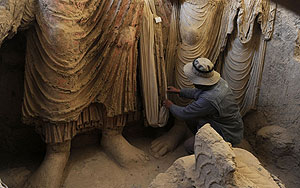 A coup, a revolution, an invasion and a war interrupted what might have been an organized excavation of the site believed to have once been an important stop on the Silk Road.

Since the site's discovery in 1963 by a French geologist, Mes Aynak has been used for Soviet tunnels and al-Qaeda training camps, leaving it vulnerable to looters and decay. But in the early millennium, archaeologists finally began a proper excavation, uncovering, The Guardian reported:

19 separate archaeological sites in the valley. These ranged from four fortified monasteries, a Zoroastrian fire temple and several Buddhist stupas (commemorative monuments), through ancient copper working, smelting workshops, miners habitations and a mint, as well as two small forts and a citadel. They also found a hoard of Kushan, Sassanian and Indo-Parthian coins, more than 1,000 statues, and several perfectly preserved frescoes showing donor portraits and scenes from the life of the Buddha.

Now Mes Aynak is threatened again, this time by a 30-year, $3 billion contract signed by Afghanistan’s Ministry of Mines and Petroleum (MoMP) and the China Metallurgical Group Corporation (MCC). The MCC estimated the site contained roughly $100 billion worth of copper, which some say will revitalize Afghanistan's economy and others say will bring about the destruction of a major cultural heritage site.

“From one side, my people need food. We are poor people," Nasir Ahmad Durrani, deputy minister of mines, told Al Jazeera America. "My national budget needs to generate revenue. But on the other side, I have to protect the international heritage.”

Archaeologists believe it would take close to 25 years to excavate the entire site, Al Jazeera reports, but the MCC is due to take over the site for mining purposes by the end of 2014.

Meanwhile the MoMP has hired more than 1,750 Afghan Public Protection Force security guards to protect the site, while archaeologists race to preserve as many of these thousand-year-old Buddhist artifacts as possible.

Check out the Greek features on this Buddha head discovered at Mes Aynak, Afghanistan.