VIJAYAWADA, India -- In an important excavation executed by the Archaeology Department after finding a wall at Bhimeswara temple at Chebrolu village in Guntur district, the officials have unearthed six railing posts of the Buddhist Stupa and several other precious remains. 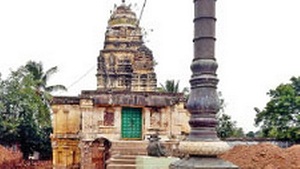 It may be recalled that the a brick alignment (wall) was unearthed on August 12 while digging on the southern side of the Bhimeswara Temple premises as a part of the temple renovation works taken up by the Archaeology Department. Following this, a team of officials of the Archaeology Department including assistant director K Chitti Babu, deputy executive engineer Koteswaran and technical assistant B Deepak Joe visited the place on August 16 and decided to explore the site further, anticipating some valuable remains there.

After the excavation, they have found the railing posts depicting Lotus Medallions and a row of animals. They also found a sculpture in which Bodhisattva is seen worshipped by a group of devotees,  an image of a mystical animal and a ‘Yaksha’ on these posts.

“We have also found a sculpture in which the devotees are seen worshipping a Stupa by garlanding it, and large bricks (52 x 27 x 8cm size) at the site,” said Chitti Babu and added that an inscription of temple in Telugu-Kannada language has also been found.

“But this inscription belongs to medieval times when Telugu and Kannada languages had one script. A Buddhist pillar has been flattened to make this inscription,” he said.

Chebrolu was a territorial capital at that time. The remains found at the temple might belong to 1st or 2nd century AD, according to the officials.

When asked about taking up further excavation at the site, the officials said that they do not have any such plans right now.

Buddhism flourished during the Satavahana and Ikshvaku dynasties as they have patronised the religion. But the rise of Vishunkundinis (Vaishnavaites), Pallavas (Shaivites) and Eastern Gangas (Shaivites) has helped Hinduism revive itself and so Buddhism disappeared in these areas. The Buddhist sites have turned into Hindu temples.

A Crucible of Buddhism

Chebrolu is an ancient village located about 17 km from Guntur. It is situated on a large mound, the excavation of which revealed several terracotta figures and Roman coins. Its ancient name was Sambhole (from which ‘Chebrolu’ is derived).

The Brahmalingeswara Chaturmuka Brahma temple has a small shrine situated in the middle of the temple tank. The main deity is a Siva Lingam, which has four images of ‘Brahma’ carved on its sides.

As many as six Stupa posts have been unearthed at the site.

The officials say that they may not take up further excavation at the site.

Remnants of a Buddhist monastery, dating back to pre-Satavahana period, unearthed atop the Bhairavakonda hillock at Vaikuntapuram village in Thullur mandal of Guntur district in March, 2013.

Another Buddhist site, belonging to the 2nd Century AD, unearthed near Pondugula village in March 2013.