NARA, Japan -- Archaeologists have unearthed fragments of roof tiles that may have decorated a memorial dedicated to Jianzhen, the tenacious priest from China who helped spread Buddhism in Japan during the eighth century. 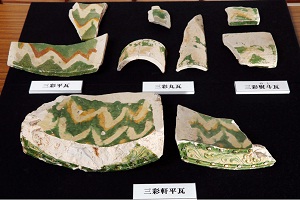 The pieces feature wave-like patterns unique to Toshodaiji temple, which Jianzhen founded in 759, the Nara Prefectural Archaeological Institute of Kashihara and the temple said on Oct. 9.

The institute said 65 fragments of roof tiles were found in a dig site within the grounds of Toshodaiji temple between the Kodo Lecture Hall and the former site of the monks’ living quarters called Nishimuro.

“The monks probably set up a small shrine displaying Jianzhen’s portrait inside the living quarters, which they decorated with roof tiles with wave-like patterns in memory of the foreign priest who came across the sea,” said Fuminori Sugaya, director of the institute.

The largest fragment measured 22.5 centimeters long, 17 cm tall and 4.5 cm thick. The tiles, likely produced in the eighth century, were glazed in shades of green, white and brown.

The three hues are used in a ceramic style called Nara Sansai (Nara three colors). This style, which proliferated in the Nara Period (710-784) and Heian Period (794-1185), mimicked the Sancai (three colors) pottery produced in China during the Tang Dynasty (618-907).

Toshodaiji temple is believed to have been the only one with tiles containing wave-like patterns.

Jianzhen (688-763), also known as Ganjin under the Japanese pronunciation of his name, was noted for his persistence in trying to reach Japan from China to spread the teachings of Buddha.

After five attempts failed because of shipwrecks and pirate attacks, the high priest finally landed in Japan in 753. He died in the country a decade later after helping to propagate Buddhism in Japan. He was awarded the honorary name Daiwajo.

Written records from the Heian Period indicate that Jianzhen lived in the Daiwajo-shitsu (Room of Daiwajo) building in the northwestern area of Toshodaiji temple. His portrait was displayed there even after his death.

“Jianzhen’s disciples probably erected Mieido Hall on the spot where the priest lived until his death and decorated it with roof tiles resembling Sancai pottery,” said Michio Maezono, a professor of archaeology at the Nara College of Art.

The newly discovered pieces will be exhibited from Oct. 11 to 13 at the Kodo Lecture Hall at Toshodaiji temple.