NEW DELHI, India -- In March this year, New Delhi-based British historian and author William Dalrymple visited the famous Ajanta Caves in Aurangabad in India’s Maharashtra state with his wife, and wandered into two lesser-known caves in the 31-cave complex - numbers 9 and 10. And the couple stumbled on what may well be a little over two thousand years old - the oldest paintings of Indian faces found anywhere in the world so far. 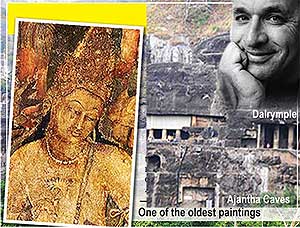 Giving a talk at the Tasveer Foundation here on what he and his wife saw, Dalrymple said: "I saw these extraordinary but unfamiliar paintings. I couldn’t recall having seen their photographs anywhere, in any books on Ajanta. Although badly damaged, I could make out that these paintings were in a different style from the better known Ajanta paintings  -  more realistic and humanistic."

The Ajanta Caves are globally famous for the 30 rock-cut Buddhist cave monuments which date from the 2nd century BCE to about 480 or 650 CE.

The Cambridge-educated author of such well-known works of historical non-fiction such as White Mughals, The Last Mughal and City of Djinns said: "It turned out that these murals were from an earlier epoch altogether: at least 600 years older than the more famous ones. That is about the same time difference that exists between the monuments of Lodhi Gardens in Delhi and the skyscrapers of Gurgaon."

Dalrymple wanted to know: What happened to these murals? Why is there so little record of them? His search led him to discover this vast treasury of paintings, which he says can arguably be called "the oldest Buddhist paintings anywhere in the world."

His research revealed that these two caves and their murals fell into obscurity largely because, in the 1930s, the Nizam of Hyderabad sent a team of Italian restorers to make them ship-shape. And they, in all their wisdom, covered them with shellac, which attracted bat dung and other kinds of debris till everyone gave them up for lost. At that time, the area was a part of the Nizam’s Hyderabad province.

Dalrymple says the murals dating back to 70-90 BCE, were almost lost, and then were diligently but partially restored.

Interestingly, Dalrymple also found that the Archeological Survey of India (ASI) had re-discovered these paintings about a decade ago, and had been diligently at work restoring them with some accuracy  -  led by a passionate restorer called Manager Singh  -  but "had not told a soul about this work!"

"When the Vatican restored the ceiling of the Sistine Chapel, they invited the world’s media to come take a look; there were front-page photographs in all the leading newspapers. But the ASI kept completely quiet about finding the oldest representations of Indians anywhere."

Because, he says, that’s just what they are. Despite extensive damage, the paintings in this bunch are more realistic and robust representations of ordinary people than the more stylized forms of Bodhisattvas in the latter period of Ajanta cave paintings. They date, as far as can be estimated, to 70-90 BCE (Before Common Era).

"This pre-dates everything in Indian art. These are the oldest faces of Indians in existence," said Dalrymple, while pointing to slides showing visual representations of the Jataka tales, which formed the main subject matter of these paintings. The faces are full of vigour and expression, and each face is individually delineated, the historian pointed out.

"The most marvellous thing is, you still see these faces, these same features, and sometimes even the same designs in jewellery and dress, even today in western India. But the people represented here  -  though we don’t know if the anonymous artists painted them from life or imagination  -  lived two millennia ago," the historian added.