Xinjiang, China -- The ancient Silk Route was not only a trade route where goods could be transported between East and West, but was also a corridor where ideas could flow freely. This transmission of knowledge would change the societies along the route. 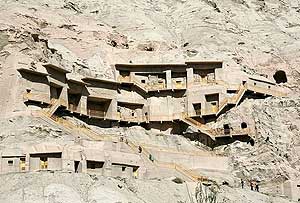 The presence of Arab traders, for instance, would spread Islam along the Silk Route, thus transforming the religious beliefs of the people they met during their trade missions. One such place is the Xinjiang area in northwestern China, where the majority of the inhabitants today are Muslims. Prior to the coming of Islam, however, the people of Xinjiang were Buddhists, and one of their great legacies can be seen in the Kizil Caves.

The Kizil Cave complex is believed to be the earliest major Buddhist cave complex in China, and is located in Baicheng County, Xinjiang. The development of this cave complex is said to have occurred between the 3rd and 8th centuries A.D. under the ancient Tocharian Kingdom of Kucha. There are 236 known cave temples carved into the cliff from east to west, spanning a length of 2 kilometers (1.2 miles). Of these, around 135 are still relatively intact.

Like other Buddhist rock-cut cave complexes, the caves at Kizil may be divided into two major categories: monastic cells which were simple and unadorned, and halls of worship which were often sumptuously decorated with murals and sculptures.

Although most, if not all, of the sculptures can no longer be found at Kizil, the majority of the murals have been preserved. These murals contain a variety of religious themes, ranging from the life of the Buddha to allegories or parables concerning the doctrine of karma.

Apart from these sacred themes, secular subjects can also be found in the paintings. These murals depict the everyday activities of people in Kucha, such as farming, hunting, and riding. One cave even has a mural depicting a band of 20 Kucha musicians playing their instruments.

In addition, the natural scenery of the region, including mountains, rivers, plants and animals, can be found in the murals. Thus, the murals are a window not only to the religious aspects of the region, but also an important tool for the understanding of Kucha society and culture during that time.

While the exact date of painting is unknown, archaeologists have been able to divide the murals into main stylistic phases. The murals from the first phase can be distinguished by the use of reddish pigments. Moreover, the lines in the paintings were carefully drawn, while the gradation shades were blended so as to give a 3-D appearance to the paintings.

As for the second stylistic phase, the use of bluish pigments, including lapis lazuli, is said to be its defining feature. Additionally, a 3-D appearance to the figures was achieved through large differentiations in pigments shades. Most of the murals belong to the second phase, which stunned the archaeologists who visited the site in the early 20th century, as lapis lazuli was a highly precious commodity.

Another interesting aspect of the Kizil Cave complex is the fact that the most of the murals are lacking in Chinese influence. As a matter of fact, only two of the caves at Kizil display Tang Chinese elements, indicating that these were produced at a later date, i.e. towards the beginning of the 8th century when Tang influence arrived in the area. By contrast, the presence of either Graeco-Indian (Gandharan) or Sassanian (Iranian) elements in the murals indicate that these were produced at an earlier date. The occurrence of these Western artistic elements may not be as surprising as it may seem, considering that Western travellers along the Silk Route would have passed through Xinjiang on their journey to China.

It is unfortunate that many of the caves have been defaced over the centuries. The arrival of Islam in the region, as well as the Cultural Revolution under Mao Zedong had a highly destructive effect on the caves. Furthermore, German archaeologists who visited the caves in the early 20th century conveniently removed large chunks of murals to be taken back to Berlin, leaving numerous blanks in the cave walls. Yet, efforts have been made to restore the Kizil Cave complex, giving hope that visitors may once again see the Kizil Caves in all its former glory.