By Khaleda Rahman and Edward Chow, Daily Mail, 7 May 2015

Chongqing, China - A Buddhist statue that is more than eight hundred years old has been restored to its former glory and will soon be on public display in China after an eight-year conservation project. 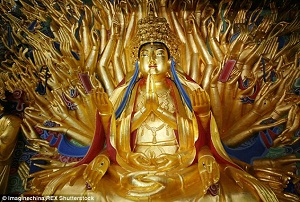 Cultural experts gathered in Dazu, near Chongqing, to see the unveiling of the UNESCO-listed Guanyin statue in Baoding Mountain yesterday, the People's Daily Online reported.

The Dazu Thousand-hand Bodhisattva was carved during the Southern Song Dynasty (1127 to 1279).

The statue's bright golden colour lost its lustre over the centuries, cracks appeared in the sculpture and part of one of its many fingers fell off in 2007.

A restoration project, which began in 2008 and cost tens of millions of yuan, is finally complete and the statue will be on display to the public from June 13.

The conservation team used the most advanced X-ray and infra-red technology to analyse the statue and found various factors that have affected its structural integrity.

Researchers found that the intense heat of Chongqing summers, which have a particularly oppressive humidity, which results in the surface of the Guanyin statue being covered in moisture.

Mr Zhan added that the condensation forming and evaporation process has aged the statue and attacked the gold plating, leading to some bits flaking off.

Dazu rock carving expert Chen Huili explained that the process is similar to the damage caused by condensation in the home, which results in deterioration of walls and clothing.

He added it was a tricky problem for the team.

But the project team were hindered as there were no records from past restoration efforts of what was done and no similar restoration projects in or outside of China for them to refer to.

The team studied the Tongnan Buddha and the caves in Sichuan and Chongqing to find out the best techniques and methods to use in the restoration.

Mr Zhan said that many people have raised their concerns over how long the repairs will last as the previous restorations had intervals that ranged from decades to centuries.

He said that this is a very difficult question to answer.

Despite being the most comprehensive restoration project for the statue, environmental issues are a cause for concern, including the condensation as well as the dust from the incense that is burned on a daily basis.

Mr Li explained that these issues are being tackled from two different angles.

The first is that the statue will be ventilated to rid it of the build-up of condensation.

Second, academics at Tsinghua University are looking into using the principles of aerodynamics to create a 'curtain' in front of the statue which will allow visitors to see the statue, but prevents dust from reaching it.