The Buddhist medicine men of Thotlakonda

New Delhi, India -- The Buddhist monks of Thotlakonda and Bavikonda were experts at practicing medicine. Evidence to that fact comes to us not only from ancient Buddhist scriptures in general but also from the hills themselves in particular. Then there is the corroborative evidence that came to light at Kottura. 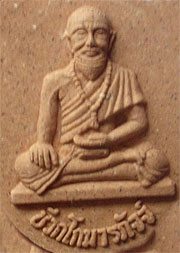 << Jivaka, famed medicine man during the time of the Buddha

A decade ago, an ancient Buddhist stupa, contemporaneous with the sites of Visakhapatnam, was discovered on a hillock in the village of Kottura near Yelamanchili.

Near the stupa complex, which has undergone several seasons of excavations, there lies a cave, which is of great interest to us. The cave commands a spectacular view of rice fields, mango orchards and coconut groves that form a sea of green against the dark of the hills.

The cave has many interesting features. On the face of it, it bears a strong resemblance to the living quarters of a ship's first mate, in that, it is cramped but well appointed. There is just about enough room in the cave for one man to sit or lie down. It has a stone bench, hewed into the bedrock, which must have served as a bed, if one were to sleep in a foetal position.

Next to it is a fair sized window. There are markings in the window jamb to indicate that it had shutters at one time. There are also post holes all around the cave-cum-bedroom, not only on the floor in front of the entrance but also above the entrance, in the bedrock, indicating that the entry at one point had an awning to provide shelter from sun and rain. The cave is located away from the stupa complex as if to protect the monastery from the goings on at the cave.

The day I visited the cave I noticed that the sun beat down mercilessly; the heat inside the cave was stifling and I could see the point of the awning. The cave is quite unlike any other that I have seen. What makes it different from the rest is the number of mortar and slick marks that the floor is covered with; clearly, whoever lived there indulged in some heavy grinding and pounding. The entire floor of the cave, not sparing even an inch of space, was covered with the markings of the occupant's grinding activity. Now the question is, who lived in the cave and what exactly did he grind, pound or paste, and to what purpose?

My own educated guess is that a doctor, a chemist or a medicine man, call him what you may, lived there and treated the sick. Whether the patients were the resident monks or the laity is another matter altogether. The number of slicks and mortars make one wonder if the monk earmarked each one of them for a different medicine, say one for a fever, another for colic and the third for dehydration and so on?

Similar are the slicks and mortars found on the Thotlakonda hill. They appear in association with water bodies. So might one surmise that wet grinding of medicines for juices and poultices was done at those remote spots on the hill, but away from the monastery? What better way to keep the common folk tied to the religious establishment than to attend to their daily and common aliments?

The phenomenon of the Buddhist monks turning expert medicine men started as a necessity, as illustrated by an episode, attributed to the early years of Buddhist monastic life and provides an interesting backdrop to our scenario. Once, while Buddha was going around the sleeping quarters of the bhikkus (monks) accompanied by one of his principal disciples, Ananda, he came upon a certain bhikku who had a stomach disturbance and to Buddha's dismay, was lying in his own "evacuations," unattended. The Buddha asked Ananda to fetch water and, between them they washed and cleaned the bhikku. The next day Buddha convened a meeting and exhorted the bhikkus to take care of their sick. "O ye Bhikus," he said, "ye have no mothers and fathers who might wait upon you! If ye bhikkus wait not one upon the other, who is there indeed who will wait upon you?"

Thus, the monks became acquainted with the art of treating the sick and over time, they became extremely skilled at curing all manner of illnesses, and even in conducting surgery. Monasteries became famous for the medical care that they gave to fellow monks. A most famous physician of the time was Jivaka, who was the personal physician of Buddha. Jivaka of Rajagriha, eager to master the science of medicine, apprenticed under a "world renowned physician" at the famous university of Taxasila, situated in present day Pakistan.

Jivaka was a good student and studied well under his teacher. The text says, "He learnt much, and learnt easily, and understood well, and did not forget what he had learnt." At the end of seven years of understudy he went to his teacher and asked if he had completed his education. The teacher said, "Very well, my dear Jivaka, take this spade, and seek round about Taxasila a yojana (a distance of 8-13 km) on every side, and whatever (plant) you see which is not medicinal, bring it to me." Jivaka went a yojana on all sides of Taxasila but could not find a single plant that was not medicinal. He returned to his teacher and reported the matter. The teacher, satisfied that his ward had mastered the art of medicine, pronounced his education complete.

On his way back to Rajagriha, while at Ayodhya, Jivaka made his name by curing people of their many ailments. Jivaka's fame spread and many rich and powerful people sought his help. Jivaka was also a skilled surgeon and is said to have performed many operations, including that of fistula on King Bimbisara of Magadha. Then there was the case of a very wealthy setthi of Rajagriha, who was suffering from an obscure disease in the head. He had a migraine which no other physician was able to cure.

Having diagnosed the source of his trouble, Jivaka "ordered the setthi to lie down on his bed, tied him fast to his bed, cut through the skin of the head, drew apart the flesh on each side of the incision, pulled two worms out of the wound and showed them to the people." The setthi was obviously suffering from an infestation of tape worms. It is interesting to know that to date, the only way of ridding a patient of tape worms lodged in the brain is to do exactly what Jivaka did!

What comes through to us through this brief account is the presence of world class universities and the modern scientific knowledge that they imparted, including surgery. Further, knowledge seekers like Jivaka travelled great distances, (the distance from Rajagriha to Taxasila must have been a few thousand miles) to acquire education in specialised fields. That the knowledge acquired thus should be disseminated as far as Visakhapatnam is relevant to us.

So much history and information is hidden in our monuments that they cannot be trivialised by mindless tinkering by any authority. Today we are so obsessed by the lure of development that we do not hesitate to tamper with anything that comes in our way, be it a forest, a water body, or a fragile archaeological site. We are blinded by the prospect of making quick money, never mind how.

However a time may come in the not too distant future, when our children begin to recognise the value of our heritage. They might have more resources and better technology to explore our past, better than us. It would be a great disservice to our posterity if we do not conserve what we inherited from our ancestors, but subject our rich archaeological legacy to vandalism in the name of tourism, or some other 'developmental' activity.