Due to to its location along the ancient Silk Road, China's Xinjiang region is a treasure trove of Buddhist temples and art.

BAICHENG, China -- China’s far-flung Xinjiang region may be better-known today for being the heartland of the Uighur Muslim minority, but it also has a treasure trove of Buddhist temples and art due to its location along the ancient Silk Road. 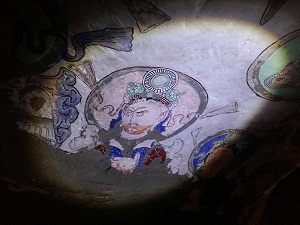 The Kizil Caves in Xinjiang for instance is the earliest major Buddhist cave complex in China. Despite being uncovered in the last century, most of the caves remain closed to the public.

Only top Chinese leaders are allowed to enter due to the caves’ fragile environment, but tourists can visit about eight of the other 230 known cave temples in the area, although photography’s forbidden.

Most of the caves are in bad condition.

According to locals, the Muslim population living in the area, and more recently the Red Guards from China's Cultural Revolution, were responsible for much of the destruction of the caves' interiors, while in the early 20th century German archaeologists removed large pieces of murals from the caves.

More than US$32 million have been spent over the past decade to restore the caves.

“Our academy is mainly focusing on preventative protection, because there are only a few types of materials in the world that we can use to protect the sites - chemical materials,” said Xu Yongming, president of Kucha Academy of Xinjiang. “But I think these will threaten the long-term preservation of the murals.”

Sun Lianqiang is one of those restoring the murals. He spends up to eight hours a day in cramped conditions touching up the artwork.

“These paintings are a few thousand years old, and I feel a deep sense of responsibility, and I’m afraid of doing something wrong, so every step of the way, there’s a huge pressure,” said Sun.

Some of the paintings were done as early as the 3rd century, which makes them more than 2,000 years old, so besides preserving the artwork here, the authorities are also capturing images of these artwork to form an online depository.

“The main goal is still to record all the information,” said Xu. “Since 2005, we’ve done stuff like virtual tours, cave modelling and virtual modelling, so in the event that the cave is damaged, we can reconstruct it based on our online depository.”

Authorities hope that these efforts will help restore the caves as close as possible to their former glory. Thus giving more people the chance to view and admire one of the remaining legacies of the ancient Silk Road.